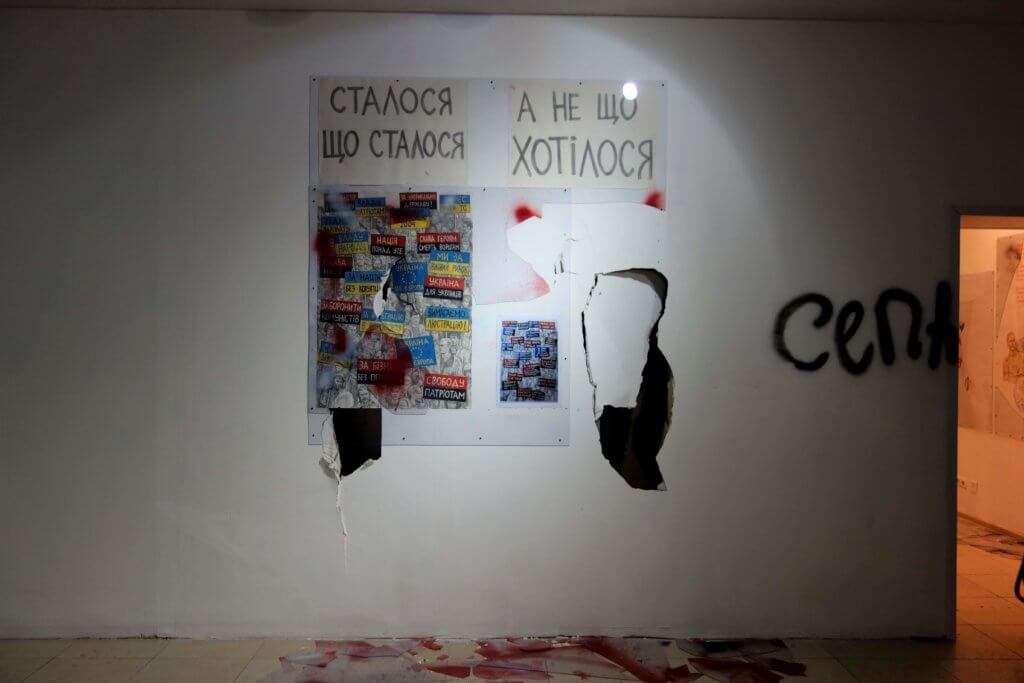 Visual Culture Research Center reopened The Lost Opportunity exhibition by David Chychkan in the condition it was left in after a neo-Nazi pogrom.

Today we are at the scene of the crime: a place which belongs to art. This is very painful for us. Everything here can be seen for exactly what it is: the smashed walls are smashed walls, the destroyed pictures are destroyed pictures, the vandalised space is vandalised space. What’s more is that the pogromists were armed and shot at the artwork. This attack was fueled by hatred: a trace of a misanthropic fascist ideology, based exclusively on destruction and murder. Those who can do this to paintings can do the same to people – the only difference being that this attack was not deadly.

The exhibition, preserved in the state it was left in after the pogrom, is a sculptural portrait of Ukrainian society in its current form; it is the Ukrainian body today. The terrifying neo-Nazi cleansing of The Lost Opportunity exhibition reinforced the main political lesson that we have to remember after Maidan: a revolutionary opportunity has been lost by turning into its ideological opposite.

This situation begs both political and basic existential questions. Fascism and anti-fascism are not problems of the Kremlin propaganda discourse, or the confrontation between youth subcultures. They are a fundamental separation between savagery and art, barbarism and culture, and, eventually, of life and death.

Fascism is always terror, and always leaves a political void; they have come not only for us, but for you, too – for all of us. Where there is fascism, there is nothing but fascism. That’s why in order to enable art to be presented, and for a field of culture to exist, we – the Maidan society, not a Dogville community – have no other option than to remain consistent in our pursuit of anti-fascism. Every action has to be based on this political assumption, as this is the only opportunity for freedom, equality and social solidarity. If we lose this opportunity, none of us will survive.

On behalf of the Visual Culture Research Center collective, I also want to express our thankfulness to all our colleagues, friends, and comrades for supporting and staying with us despite everything. Thank you!