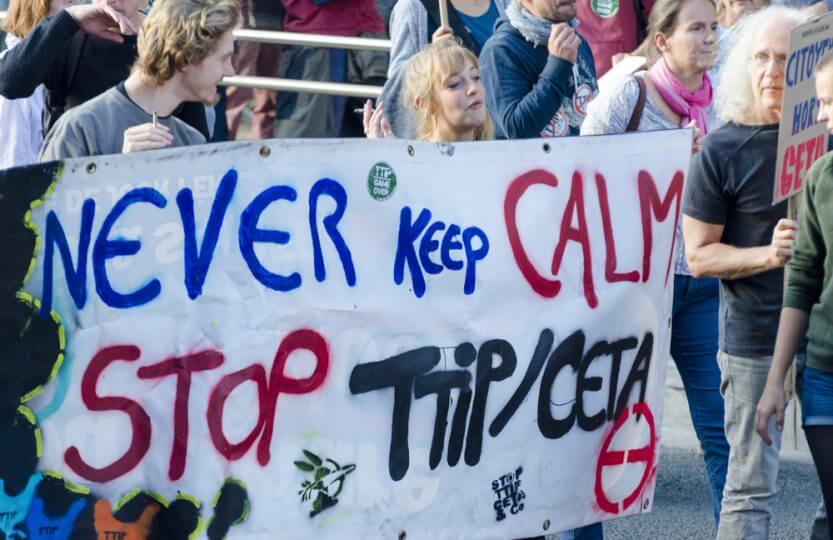 The wilting European Union and its administrative apparatus keep pressuring its members into accepting so-called trade agreements. This course of action, however, puts European integration at risk, since the trade agreements in question also happen to include (in addition to the usual tax and customs reliefs) widespread support for the movement of capital – including the harmful financial capital – and eroding the foundations of the democratic state. The events surrounding the two most controversial (yet not well-known among the Czech populace) treaties – TTIP between EU and USA and lately CETA between EU and Canada – are a textbook example of this.

A threat against sovereignty

The treaty consists of 454 pages of text and the sixteen published amendments total at another 1799. As such, it is an extremely complicated legal document with interpretations open to dispute for a long, long time. The negotiations themselves, with their feverish pace and the last-minute rework, show the European institutions in a pretty bad light. Now the treaty moves toward the European Parliament and is likely to be decided on in February 2017. The ratification by the individual Parliaments of the European countries should follow.

So what risks are we facing here?

The biggest threat CETA presents does not hide within the trade regulations but rather the paragraphs dealing with state sovereignty. The most dangerous proposal is the establishment of the Investment Court System (ICS) – a special judicial system intended to replace the current practice of arbitration between investors and states, a system that amounts to nothing less than rape of every principle democracy stands for: in the ICS, it is possible for an investor to sue a state, but a state cannot sue an investor. So the practice where the tobacco corporation Philip Morris could sue Australia for its Parliament passing anti-smoking laws happily remains in place.

This attitude keeps weakening the position of democratic states and denies just every established spirit of law, most notably the principle of the equality of prosecution and defendant and the impartiality of the court. Establishing the ICS means the creation of another, secondary rule of law, which just happens to be considered superior to the laws of EU and its member states as well as out of reach of the other judiciary systems. How is this monstrosity going to reinforce the failing trust in the Union by its citizens remains to be seen.

Today, we cannot possibly fathom the full extent of danger presented by the ICS.

CETA being as integratory as it is when it comes to cooperation in regulation, intellectual rights protection and employment law means we can expect further increases in the influence of international corporations on the countries of EU. More questions are being raised by the risk of chaining the international treaties of this kind since Canada (along with the USA and Mexico) is already part of NAFTA. To put it simply, there are way too many problems around CETA and the most important question – cui bono – remains unanswered.

The primary defense used by the European Commission to justify CETA is the supposed necessity of removing the obstacles to trade and ensure constant economic growth and competitiveness of European businesses. What it conveniently fails to mention is that opening up the European market will also inevitably lead to easier competition from Canadian companies – and this is a victory for the global corporations permanently lobbying in the backstage of European politics. Putting aside the ridiculous macroeconomic arguments about GDP growing by tenths of per cent per year, the question of how exactly will the EU make sure the benefits of these effects actually reach the citizens – those who, according to the European Commission, are to benefit from CETA the most.

So far, the Commission has yet to publish any impact analyses, sticking to purely propagandistic pamphlets. Relevant studies published by independent research institutes claim a Union-wide increase in GDP by 0,025%  and salaries by 0,013% during the next ten years. According to a study requested by the Czech Ministry of Industry and Trade, the economic benefits for the Czech Republic will amount to practically zero. After seven years of CETA functioning, the Czech GDP growth should increase by staggering 0,0072% and the wages of qualified employees should increase by 0,0041% – roughly 0,05 of a Euro. The sheer meaninglessness of these numbers only confirms that there is no relevant economic reason for signing the CETA, unless you consider easier movement of capital and protecting investors from “states’ harmful interfering in the business freedom” one.

The intense discussions over CETA in many European countries (especially Germany) does not stir the calm, self-centered waters of Czech politics – and politicking – one bit.

No one seems interested in the confusing and opaque way the treaty was sanctioned, no one cares about the rational arguments against it.

The Ministry of Industry keeps repeating the same old arguments devoid of any meaning or referring to the theoretical possibility of altering the treaty in the future, perhaps in hopes that further sanctioning of the treaty will pass without any interest from the public. Czech government, after all, fully supports this type of treaty – in their way: a priori, mechanically, without any way of participating or affecting the negotiations. There is little doubt about their support for ratifying CETA. The Czech Parliament has yet to acknowledge the treaty in any significant way: considering the complexity of the matter and general disinterest in open discussion, we can safely expect a purely formal Parliamentary session immediately followed by ratification.

But when the information of the explosive content of CETA reaches the hands of political powers capable of using it against European integration, it will be too late. The highest echelons of the EU keep expressing their bewilderment over Brexit, but they failed to learn its lesson; maybe they are simply incapable of that. The worries that EU is headed towards destruction are becoming increasingly real by the moment and CETA is just another nail in the failing Union’s coffin. Will we keep waiting for Godot – while knowing that the emperor is not wearing any clothes? Would not it be better to just make him some?

An edited version of this article originally appeared on A2larm. Translated by Michal Chmela.

Jiří Šteg
Jiří Šteg is an economist.
> see other articles <