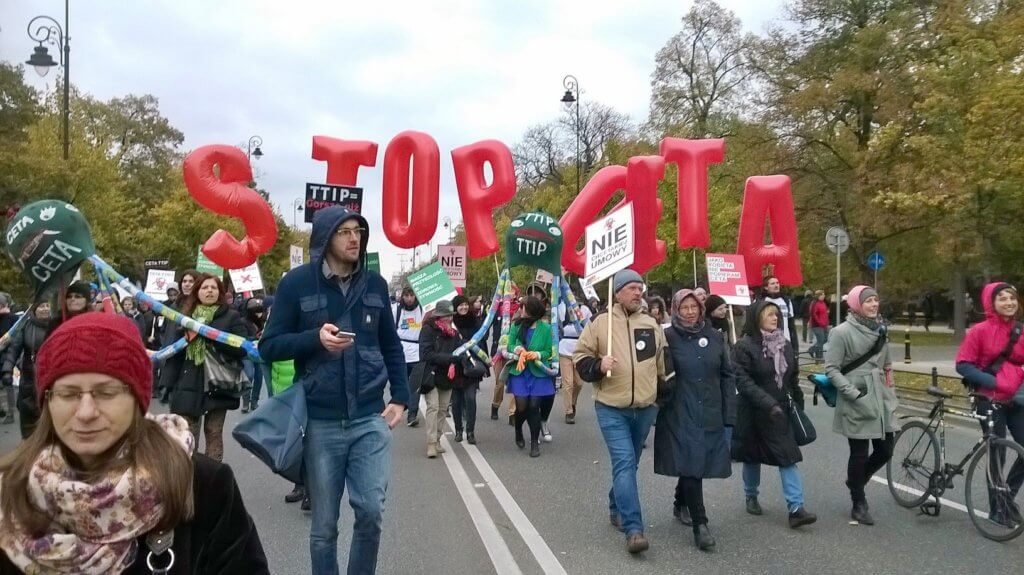 Firstly, it is necessary to point out that we do not need the Comprehensive Economic and Trade Agreement (CETA) in order to establish trade relationships between Poland and Canada or between EU and Canada. We already have working trade agreements. However, CETA is not about establishing a framework for economic cooperation between Europe and Canada, but about radical transformation. CETA, like the Transatlantic Trade and Investment Partnership (TTIP), is a new type of trade agreement.

Like the old free trade agreements, the aim of CETA is to liberalize international exchange by reducing trade tariffs. We are told that we are all better off when the barriers to trade are reduced; goods are cheaper, we pay less for electronics or food, who wouldn’t like that? However, it’s important to remember why trade tariffs were first introduced. They have served, primarily, as a source of government revenue. As the liberalization of trade progresses these revenues will decline. Trade tariffs are also an important instrument of protectionist industrial and agricultural policies. That is, they are used not only to help the local producers survive competition with imported goods and services. To some extent trade barriers can be used to protect the of public health standards, by making goods that are unhealthy or dangerous for the environment less attractive to consumers.

But, and this is a qualitatively new component of agreements like CETA, this agreement not only reduces duties, but also aims at getting rid of so called non-tariff barriers to trade. For example, if you want to trade in a foreign market, you have to meet the standards set by the regulators of that market. In many areas of the European Union those standards are set higher than in Canada or in the United States. In the EU you have to prove that a substance or technology is safe before you can sell it (the ‘precautionary principle’). On the other side of the Atlantic you can market a product until it is proved unsafe. And this process takes time. For example, it took decades to have Agent Orange withdrawn from the American market. Today in the EU, such substances would have to be approved by specialized institutions before it would be possible to market the product.

You simply cannot harmonize two such different regulatory approaches; you must pick either one or the other.

In the CETA documents which are publicly available there is no mention of the precautionary principle in European regulation. It is no wonder that people are concerned that this is because CETA undermines this part of EU consumer protection regulation. And people are worried, in particular, about Genetically Modified Organisms (GMO), agricultural products developed by North American bio-technology companies, many of which are currently banned in the EU. It is important to emphasize that the precautionary principle is part of EU regulation, the result of a long and democratic process. CETA represents the influence of trade deals negotiated in secret over democratically agreed processes.

A third important element to keep in mind is a system of so-called international investment arbitration (so-called Investor-State Dispute Settlement, or ISDS). ISDS allows corporations to sue a state for lost revenues as a result of that state’s policies. The cases will be decided by judicial officers who are outside of that state’s normal judicial system. Despite the procedural changes introduced to CETA’s ISDS system, serious concerns remain. The right to sue operates only in one direction; states cannot sue companies for lost revenues as a result of that company’s conduct.

ISDS arbitration works only in the interests of investors. ISDS judicial officers cannot take the public interest into consideration.

Assuming that the calculations made by the European Commission are correct, CETA will have a marginal effect on the overall GDP of Poland, namely, 0,018 per cent after 10 years. However, while the aggregate effect of CETA will be negligible, we will see a transfer of wealth from the poor to the rich. The agreement will mean the loss of 200 000 jobs across the EU. While we may not have precise data, we can expect that Poland will be among the countries that will suffer. The agricultural sector will suffer as cheap (and low quality) food will move from Canada into Europe. The Polish Ministry of Agriculture has repeatedly voiced concerns over this agreement, but it has failed to get its message heard.

One can argue that CETA would actually improve Poland’s position. Poland had already entered the system of bilateral investment treaties in the 90s, including agreements with the United States and Canada. The agreements that were signed then are even worse than CETA, giving foreign investors in Poland even greater protection. After the breakthrough of 1989 politicians were informed that it was part and parcel of joining ‘western civilization’ and, though perhaps in good-faith, however naively, signed treaties ceding large chunks of economic sovereignty. We do not know the details, because they are not transparent, but we do know that today Poland is among the 10 most sued countries in the world. We do not know the extent to which multinational corporations are benefitting from these deals, because this information has also been classified. According to data obtained in 2015, however, Poland was defending itself against lawsuits worth 9,37 billion PLN.

I would argue that this experience should encourage Poland to withdraw from all treaties which offer such privilege to corporations. We have more than 60 bilateral investment treaties (BIT) that can be easily terminated and, as far as I know, our government has taken steps to do just that. We should conclude from this experience that we should not sign any new deal of this type. Especially if it is practically impossible to unilaterally terminate them (such as in the case of CETA or TTIP). Moreover we have to keep in mind that CETA and TTIP would impose ISDS on more than 20 member states that presently are not party to BITs with the US and Canada. This means that, if ratified, CETA and TTIP would make a greater part of the EU vulnerable to ISDS claims.

The effect would be to limit the EU’s right to regulate in the public interest.

While, on the one hand, there is much talk about freeing the entrepreneurial spirit, on the other, it is clear that the process of liberalization is concerned only with the free flow of goods, services and capital. This leads to an increase in inequality and the emergence of an oligarchy, which introduce private sector distortions into markets which CETA is supposed free from state sector distortions. While the movement of capital is freed from restrictions on movement, the movement of people is still under strict control. In my opinion, to discuss opening our borders to goods and services, while economic migrants and refugees are denied entry at the very same border, is outrageous.

Maria Świetlik
Maria Świetlik is a political anthropologist and activist. She specializes in the effects of TTIP and CETA.
> see other articles <