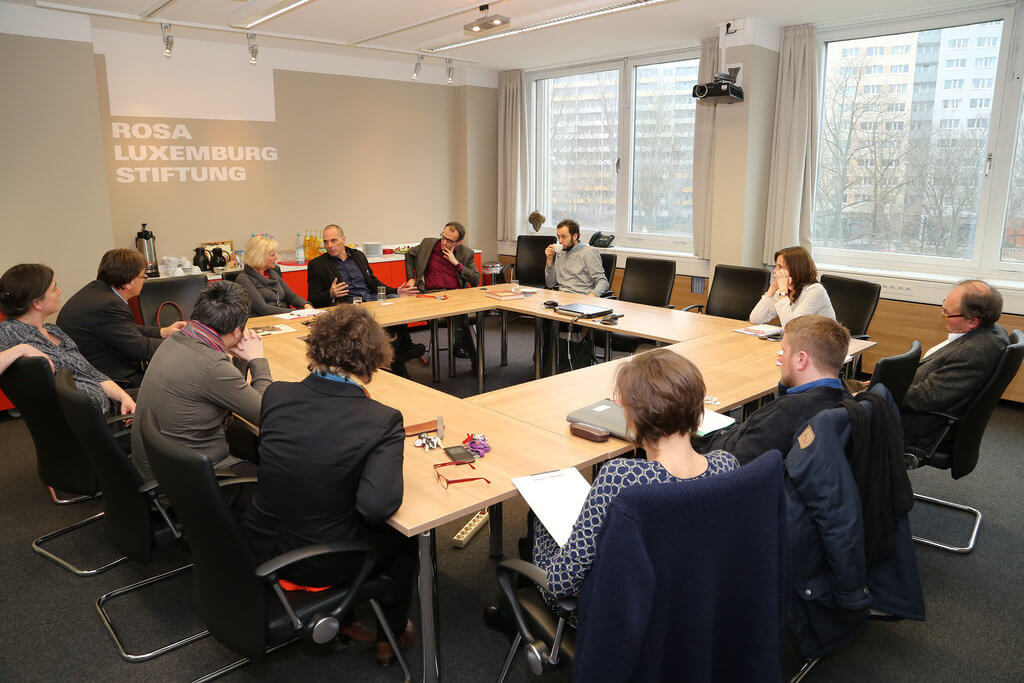 As a Diem-25-Member from Germany, who is currently witnessing the aftermath of Trump’s victory in the United States first hand in New York, I could not agree more with Yanis Varoufakis and Srecko Horvath’s calls to meet the emerging alliance of international nationalism with a new Progressive International. A new Progressive International is a beautiful vision and, indeed, the best answer to the global wave of ultra-nationalism, against which an understandably unattractive, destructive and unjust system of neoliberalism has nothing to offer. Nevertheless, a new Progressive International needs to be more than just a loose alliance of regional progressive movements fighting for national or regional democracy. We need to move beyond both nationalism and regionalism in order to make space for new geographical visions, which aim to create change at a global level and promote a vision of Global Justice that is diverse, post-categorical, social, ecological and above all democratic.

Whereas the call for a new Progressive International is a great starting point in this direction, such a global vision is largely absent from the ongoing debates on Diem’s policy direction. Although acknowledging the role of the global economy in the build-up of the crisis, Varoufakis mostly roots the rise of the new nationalist international in the context of the Great Western Deflation and draws upon historical lessons from the Euro-American Experience of the 1920s and 1930s and the Bretton-Woods Era on how to resolve it ‘domestically’. The recently distributed questionnaire on the European New Deal by Varoufakis and James Gailbraith, while insightful, didn’t pay tribute to the fact that the European economy is deeply interwoven with the rest of the world, both presently and historically, and didn’t acknowledge the privileged position of the European Union in global society. Indeed, consideration for international solidarity beyond Europe is completely absent. This is despite the fact that (the increasing trans-nationalization of the global ruling class and shifting global power relations aside) the vast majority of people living in ‘the West’, especially in Western Europe and the United States, are very privileged from a global perspective. This privilege is not only a function of colonial exploitation, but still today based on the import of cheap labour and natural resources from the Global South.

Instead of adequately compensating for these imports, our lifestyle of abundance is causing environmental destruction worldwide, especially among those populations that are the least responsible and well prepared to deal with it.

Mobility is also distributed in a dramatically unequal fashion. Despite the environmental damage it causes, mobility is more or less unlimited for those with an OECD-passport, while even those searching refuge from war and misery are being criminalized or left to die in the Mediterranean. Whereas the deaths in the Mediterranean still arouse occasional media attention, the fact that even those who make it aren’t allowed to vote and are stripped of other basic human rights is completely normalized. This system of Global Apartheid reproduces century-old structures of racial or cultural superiority, which have long been used to justify the distinction between the colonizers and the colonized. They find their newest expression in the self-defeating ‘War on Terror’ and the hatred of Islam that is behind it and this causes increasing militarization and political violence ‘at home’ and ‘abroad’.

Although driven – among other things – by a desire to change the trajectory of neoliberal globalization, the direction foreshadowed by Brexit and the Trump Victory stands to accentuate many of the problems reviewed above. The emerging nationalist international will use state protection of enterprises as well as domestic liberalization and anti-union politics to further strengthen the power of national businesses worldwide. Their policy of climate-denialism stands to accelerate planetary destruction on the back of less fortunate communities worldwide. Bigotry and Nationalist Messaging have already strengthened white supremacists and xenophobes everywhere, while the disdain for political liberalism might foreshadow an increase in political violence ‘at home’ and across the globe. The nationalist international does not (only) strive for dismantling national diversity and democracy; they also aspire to rebuild the power and privilege of their nations and cultures on a global scale.

The fight-back should aspire for nothing less than a global counter-movement. Of course, we need to build a coalition with Jill Stein and Bernie Sanders and others who are resisting Trump’s Agenda domestically. And naturally, it also means to ally ourselves with those who fight for democracy and peace in the Middle East. However, especially a couple of days after Fidel Castro’s death, it is at least as important to learn from those who have been struggling for a vision of global, rather than national or regional justice for decades; be it Cuban revolutionaries, the participants in the World Social Forum or the Global Climate Justice Movement. In this regard, we as Europeans can learn a lot from those US-social movements, who stand to lead the response to Trump’s Victory. Although often blamed for their focus on identity rather than economic issues, US-social movements – like Black Lives Matter or NoDAPL – are keenly aware how global inequalities today are deeply interwoven with a history of white supremacy and colonial domination across the World. We should follow their example and make the same connections.

A Progressive Agenda for Global Society

Whereas the Cuban revolutionaries felt that they had no other weapon other than violence at their disposal to bring about a more just world order, Diem25 as a European coalition for democracy and progressive change, has the opportunity to reject nationalism and white supremacy and to help reform the global economic order peacefully and non-violently as long liberal democracy still exists.

Beyond commendably taking a strong stance for refugee rights, we as a Movement need to come to grips with our historical guilt and contemporary privilege.

This requires more than a Green New Deal for Europe and a reform of European Arrangements. It requires that we, as European Progressives and committed Internationalists, commit to reform the unjust structure of global society, which Europe does not only profit from, but also helps to sustain. If we are serious about the idea of a Progressive International, we must add a range of demands that aspire toward this wider aspiration.
Among other proposals, Diem25’s New Deal for Europe should commit to the following demands:

• Formally apologize for Colonial Violence and Commit to Repatriation of Cultural Heritage as well as Reparations
• Acknowledge Ecological Debt & Institutionalize an Individual Carbon-Budget
• Strengthen National Regulation of Transnational Enterprises (esp. Human Rights & Ecology)
• Commit to radical reform of the UN Global Compact and the establishment of a mandatory global regulatory framework for Transnational Corporations
• Provide Debt Relief for ‘odious debt’ and repatriate Illicit Funds
• Commit to the establishment of an International Sovereign Debt Regime under the UN
• Support the establishment of an International Tax Organization and the introduction of International Taxes (i.e. on international flights, financial transactions or carbon production)
• Commit to radical Reform of the International Financial Institutions (esp. minimizing European representation)
• Commit to radical Reform the World Trade Regime (esp. minimizing intellectual property rights)
• Strengthen Worker Rights and Wages worldwide
• Create a Global Basic Income Fund and a Global Universal Health Coverage Fund and enhance international redistribution
• Transform the European military into a strictly defensive military
• Outlaw the export of weapons and other support for actors involved in Human Rights Violations
• Demilitarize Police and Border Control and abolish restrictions on the right of abode
• Work towards ending mass surveillance on a global scale
• Provide equal political rights to everyone and eliminate Voter Repression of ‘Foreign’ Residents
• Strengthen Criminal Liability for War Crimes, Human Rights Abuses and Environmental Destruction (especially those committed by Europeans themselves)

These reforms are in no way less, if not even more, realistic than the reforms implied in the questionnaire or Diem25’s manifesto, but they are too connected and relevant to ignore them. Also, in many ways, the same powers resist both of them. Let’s Fight Back!

Frederick Heussner
Frederick Heussner is doing research on the intersection between International Institutions and Global Inequality. He is affiliated with the University of Munich.
> see other articles <