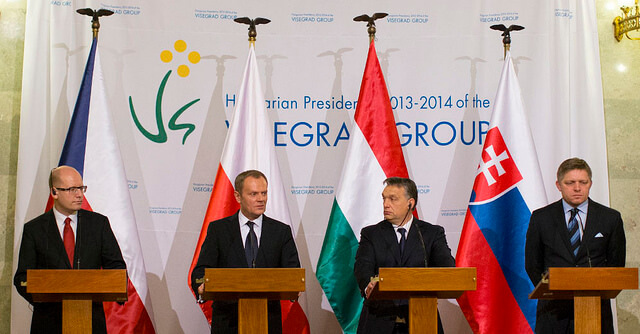 At the moment, the Visegrád group consisting of the Czech Republic, Hungary, Poland and Slovakia is lauded as a role model in several capitals of the post-Yugoslav space. In Croatia, the President promotes closer engagement with the Visegrád group. The liberal Serbian daily Danas recently praised the FDI-based economic success story of the Visegrád countries and highlighted that “they have managed to free themselves from firm connections to the USSR and immediately began to sketch thier Euro-Atlantic strategy”.  It is a variation of the older melody of turning the back to the East.

25 years ago, that melody was very much present when the Visegrád group was formed by Czechoslovakia, Hungary and Poland. It was the brain child of the then Czechoslovak President Václav Havel. He belonged to those liberal intellectual circles who tried to revive the idea of a specific spiritual and cultural distinctness of Central Europe. And it was especially the distinctness from the “East” that mattered. It was a rather explicit demarcation from the post-Soviet countries, and a more implicit one from Southeastern Europe.

The founding fathers of the Visegrád countries saw themselves in the pole position for the so-called “return to Europe”.

I.e. linking closely up to Western Europe and to be “reformed” according the model of the West.

Initially, the three member states cooperated rather efficiently in the dissolution of the Warsaw Pact. Cooperation regarding the economic relations with each other and regarding negotiations with the EU developed to a much lesser extent. Indeed, the relationship with the EU was characterised by competition rather than cooperation. Besides the desire of the Czech and Slovak political leaderships to control the privatisation process in their respective territories, the Czech aspiration to move more rapidly towards the West without the poorer Slovak areas was one of the factors behind the splitting up of Czechoslovakia. The Czech governments led by the national-liberal Občanská demokratická strana (ODS) saw the country as the most advanced in the region and made it abundantly clear that the Czech Republic would negotiate its relationship with the EU structures on its own and without liaising with the neighbours.

The then Czech Prime Minister Václav Klaus derided the Visegrád group “as a creation of the West, which is of no consequence to Prague”.

The equally nationalist, but not so much liberally inclined Slovak government headed by Vladimír Mečiar did not show much of a hurry to enter the EU and positioned itself less negatively towards Russia than the other Visegrád countries, particularly Poland. The Mečiar government was regarded as the “black sheep” of the Visegrád  group. Since the Mečiar government openly stated its preference for the creation of national bourgeoisie and was not free from arbitrary tendencies, Slovakia was as the only country of the Visegrád group not included in the first group of states with whom the EU started accession talks. Differently from the other Visegrád countries, Slovakia did not join NATO in 1999, just ahead of the NATO bombardments of Serbia. NATO membership was an informal prerequisite for the accession of East European countries to the EU.  The EU decision to exclude Slovakia from the first group of candidate countries played a role in Mečiar’s electoral defeat in 1998 and the formation of broad pro-EU coalition government in Bratislava.

The time of the accession talks after 1999 is seen as “revival” of the Visegrád group. It was, however, rather a time of like-minded economic policies and growth strategies rather than of an institutional revival of the Visegrád group as such, though the creation of the Visegrád Fund was an institutional step forward.  In all four countries, the balance of power swung in favour of the “comprador service sector” as the Czech sociologist Jan Drahokoupil calls the group of state official from FDI-related bodies, local branches of global legal advisory and consulting firms and companies providing services to foreign capital. For all four governments, privatisation and attracting FDI became key planks of the economic policy and the accession strategy. The four states competed for attracting FDI and being the first in the regatta to the EU. The regatta to the EU ended for all four countries in 2004 by accepting the acquis commautaire.

The West-orientation of the Visegrád economies was cemented. German manufacturing companies integrated the region into its export production complex – though in a subordinate position.

Assembling activities were outsourced to Visegrád countries, but research and development facilities have remained in Germany. Research and development expenditure has remained below 1% of the GDP in Poland and Slovakia which is very low by international standards. The production and export profile has become much narrower in Slovakia, the Czech Republic and Hungary. The car industry plays a key role in the economies of these three countries. The FDI-based industrial model has, thus, been very one-sided and technologically external dependent. The foreign investment is highly concentrated in a few regions, usually around the capitals and the Western parts of the countries. This investment pattern has accentuated regionally highly uneven development patterns. Except for Poland, industry is extremely outward looking. Trade links with Western Europe, particularly with Germany, are predominant. In 2007 when the brief growth spurt reached its climax, trade with the Visegrád partners accounted only for 14.7% of their total trade. They form part of a German-centred production system. The economic links with Germany are much stronger than the links among the Visegrád countries themselves.

Low wages have been at the core of the industrial export production model. This has been the key constraint for the development of the domestic market. In the pre-global crisis years up to 2008, the expansion of domestic consumption and a real estate boom (in the main urban centres) was mainly driven by rapidly expanding indebtedness of households. In Hungary, credit expansion relied particularly strongly on foreign capital inflows and many of the households took up credits in foreign currency. In all four countries, foreign-owned banks came to dominate the banking sector – even more strongly in the Czech Republic and Slovakia than in Poland and Hungary.

The 2008 global crisis hit the Visegrád countries to different degrees. Hungary proved to be most vulnerable since the abrupt end of capital inflows and the resulting currency depreciation hit the foreign exchange debtors and the banking sector severely. In Slovakia and in the Czech Republic, the steep fall of exports in late 2008 and the beginning of 2009 strongly affected manufacturing. With the recovery of the German export industry, the Czech and Slovak industry recovered relatively rapidly. Poland narrowly escaped a recession in 2009. The more inward-looking and more diversified manufacturing base softened the impact of the crisis. The de facto counter-cyclical fiscal policies contributed to stabilise domestic demand.

With the crisis, some features of the pre-crisis model became to be questioned. In all Visegrád countries, more critical viewpoints on the high reliance on foreign direct investment have been articulated.

The low wage character of the export-oriented economy has become an issue of critical debate. In Slovakia, the strong dependence on car exports has become an issue of concern. In all four Visegrád countries, the political axis has moved towards the right, particularly so in Hungary and Poland where the nationalist right succeeded to win parliamentary elections.

In positioning themselves towards the unfolding crisis of the EU integration model and the recomposing of the European power relations, the Visegrád states have shown significant differences. Slovakia with its particularly close links to the German export production sector is the only Visegrád country that joined the euro zone. The (left-)nationalist Smer government took a particularly hard line in the euro zone negotiations with Greece. By showing unflappable loyalty with the German position, it demonstrated its desire to remain within this institutional core of the EU. In the issue of the refugees, the Slovak government, however, took an extremely restrictive stance and offensively combatted any mechanism that would redistribute refugees among EU states. Thus, it challenged both the German position as the then majority inside the EU.

The Czech Republic is likewise very economically closely integrated with Germany. However, the Czech Republic retained its own currency. And the Czech National Bank first devalued and later maintained the exchange rate rather undervalued in order to combat deflation (and to promote exports). Social democrats and euro-liberals emphasize the importance of the relations with Germany and remain rather muted in regard to the further development of the EU whereas the national-liberal Občanská demokratická strana (ODS) clearly wants to stay outside the euro zone and wants much leeway for lowering tax and social standards.

The national-conservative governments of Poland and Hungary demarcate themselves politically more clearly from the core and the euro zone. In both cases, the nationalism has a partially economic connotation. Both the Fidesz government in Hungary and PiS government in Poland strive to expand the role of domestic capital, primarily in the services sector. They ascribe particular importance to expanding the role of domestically-owned companies in the banking sector. The Fidesz government dealt with the problem of foreign exchange credits and amplified its scope for exchange rate and interest policies which it used to some extent. Its economic nationalism is, however, as the Hungarian economist András Tóth underlines, “selective”. It does not concern the industrial export sector. There, incentives for transnational corporations are as generous as before. PiS has taken a more critical view on the industrial growth model and advocates a more pro-active approach than Fidesz. National-conservative in Poland have positioned themselves clearly outside the euro zone. PiS regarded the British conservatives as their main (political) allies in the EU. With Brexit imminent, they are losing this ally. Poland will be the largest country outside the euro zone. It is not clear what the Polish government will make out of that.

The unwavering anti-Russian position of the Polish government is, however, clear. Differently from Poland, the other three Visegrád governments are not ardent partisans of EU sanctions against Russia and favour a normalisation of relations with Russia.

The Visegrád countries’ relationship to the core is characterised by competing rather than cooperating with each other.

Their joint extremely restrictive position on refugees is rather an exception. And it is informed by the desire to keep off a group of migrants that are forced out of their countries by war which might compete with their “own” labour migrants in the core economies.