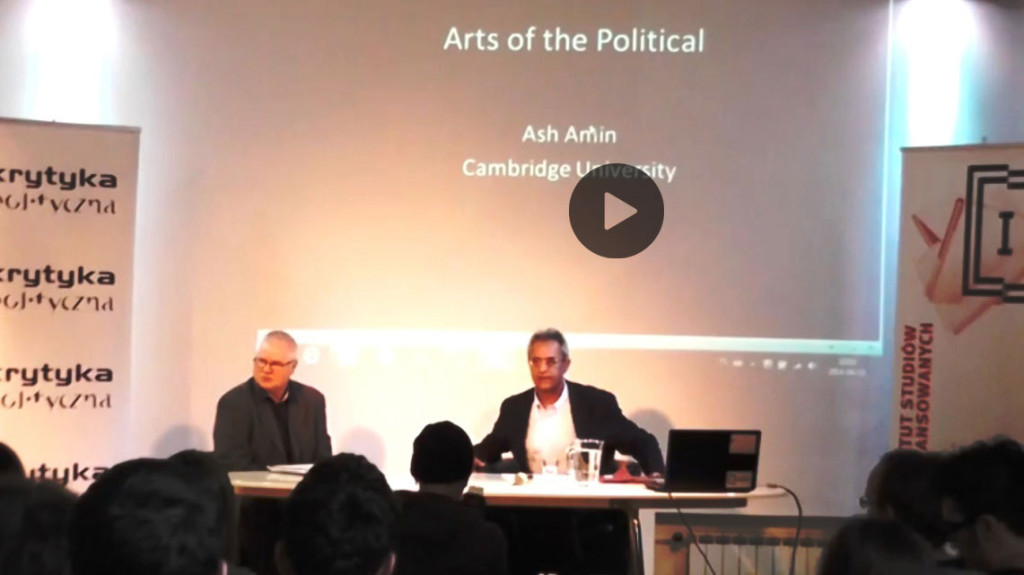 Arts of the Political

[dropcap]T[/dropcap]he global uprisings of the last two years – from the Arab Spring to ‘occupy’ movements – have wrested the political, the terrain of public dispute, from politics, the settled rules of conduct. On the other hand, politics as we know it – representative, top-down, wedded to fixed procedures, and largely presentist or if future-oriented then apocalyptic – speaks of no alternative, and of the future as more of the past, perhaps adjusted at the margins to be more inclusive. Professor Ash Amin, co-author of the Arts of the Political, claims that the organised left needs to thoroughly reinvent itself and regain the world-making qualities, which made the movements of the late 19th century so influent. German Social Democracy and trade unions or British women’s movement during the 1910s thoroughly changed the meaning of the political and its subjects by:

The left today should recover this capacity by amplifying latent and nascent demands for social justice and by working through the very many experiments of alternative society that already exist. There is no shortage of counter-hefemonic, non-mainstream and post-capitalist experimentation (to mention only a few: negative taxes and basic wage, socially enabling credit and money, Tobin’s tax, sustainable cities, anti-profiling in insurance and health care) responding to five major contemporary global challenges (concerning market fundamentalism, financialisation, global inequality, climate change, and bioethical questions). The left could make these experiments its cause, along with gathering diverse injustices and oppressions under the single umbrella of a continually expanding transformative social democracy.

Chair in Geography at University of Cambridge and Fellow of Christ’s College, Oxford University. Professor Amin is known for his work on the geographies of modern living: cities and regions as relationally constituted; globalisation as everyday process; the economy as cultural entity; race and multiculture as a hybrid of biopolitics and vernacular practices. He has been founding co-editor of the Review of International Political Economy, he has also (co) authored or (co) edited 19 books, including Cities: Re-imagining the Urban (2002, with N. Thrift) and Arts of the Political (2013, with N. Thrift).