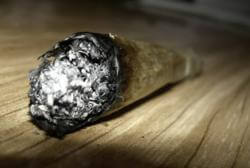 Martyna Dominiak: When was the first time you were charged with drug possession?

Paweł: Three-and-a-half years ago, my former partner denounced me to the police. The police came to my house, claiming that they can do so, without a warrant. Unfortunately, I let them in. The conversation was short: if I showed them what I got, the court would treat me leniently. So I gave them 0.2 gram of marijuana that I had at home. Then, I went to the police station, where I spent forty-eight hours. I pleaded guilty and accepted the penalty.

At the court hearing, I cited regulations that treat the possession of a small quantity of drugs as nuisance. The judge said that such a law did not exist. I got a year’s imprisonment suspended for four years, which meant that if, while on probation, I would be convicted for a similar offense, that is, for example, I would have a small amount of marijuana again, the sentence would be executed and I would go to prison for a year.

And so it happened?

In less than a year after the first sentence, police officers from the Regional Police Headquarters appeared at my door. It turned out again that someone had lodged a complaint that I had drugs. And just like before I was informed that if I immediately showed what I had, everything would be fine. So I showed. Again, 0.2 gram. However, this time  they declared that this was not enough, they still had to search the premises with a dog. But it didn’t find anything more.

Once again, I pleaded guilty and accepted the penalty. At the court session, the judge concluded that I had broken the rules of probation and I should go to jail. The verdict was six months suspended for two years, resulting in a mandatory execution of the previous sentence. In other words, I might have ended up spending a year behind bars.

How were you treated by the police and the prosecutor’s office?

None of the police officers told me that I had the right to  a solicitor or a phone call. They threatened me that I would go to jail for three months. Their approach was like this: if you committed a crime, then you were a bad person, so we had to scare you, to show you where your place was. All people were treated in the same way, no matter whether you were drunk driving, drank beer in the park or smoked marijuana. The police acted in the same way on the first and on the second occasion.

The prosecutor may discontinue criminal proceedings and dismiss the offense as nuisance or offer a voluntary submission to penalty by proposing a sentence. In my case, the latter, much worse scenario was put in place. On the first occasion, I got a very high penalty; on the second occasion, quite low. Each time, for having exactly the same amount of the drug. Each time, the penalty depended on the unrestricted evaluation of the prosecutor and, after that, of the court. There were no clear criteria for drug possession. That is how this law is constructed.

Did you ask a lawyer for help?

No. When, at the second court hearing, I cited regulations that treated the possession of a small quantity of drugs as nuisance, they told me I should be glad that I was not going to jail. I had to pay for the proceedings. I also got a fine, some part of which I worked off because I had no income for a while.

Why are you facing the court again next week?

Two-and-a-half years after the first court hearing, I got a sudden call to prison to serve the sentence of one-year imprisonment. The reason given: my probation officer had found in documents that I committed a crime while on probation after the first sentence. He made a request to imprison me for a year.

After such a long time since the last sentence?

Yes, exactly. It had been eighteen months since the second court hearing. I went to the probation officer to get all the information. I am not a lawyer, after all. Did I really have to go to prison? But he did not want to explain anything, he said he had to make such an application, it’s the law. I found out that I could make a complaint and appeal. So I started to write.

The first appeal was rejected. Then I wrote a request for a respite from the sentence. Later on I requested permission to serve the sentence that would involve electronic surveillance, there was a possibility like that if a penalty was less than one year and it was not a serious crime. You get a bracelet on your arm or your leg and you are told when to stay at home, for example, for twelve hours.

The hearing on this issue will be on 17th September. The judge may postpone the execution of the sentence, but may also decide to execute the penalty under electronic surveillance. The judge can also refuse all the appeals and, then, I will face a one-year imprisonment for possessing 0.2 gram of marijuana.

How do you cope in this maze of rules?

Agnieszka Sieniawska, Ombudsman for the Rights of Addicted Persons, is helping me now. She suggested that I can apply for the adjournment of the verdict, sentence suspension and, then, probation. I’m not a criminal, after all. She prepared a document that the offense I had committed might be qualified as nuisance and said that we could cite the article concerning the small amount of drugs.

Has this story affected your professional life?

Naturally. On the first occasion, I was asked a lot of questions at the police station, questions were unrelated to the case, for example, where I worked. They wrote everything down. If I had withheld any information, I would have been subject to criminal prosecution. After two or three weeks, a few men dressed in civilian clothes came to my workplace. They asked if I did well at work, how I behaved, who I contacted and if I was late for work. They were, as they put it, gathering information, to which they were entitled. Less than three months later, I was fired from my job and I knew from a very good source that their visit had been the reason for that. No one said anything, but a friend of mine from the HR department, with whom I had a very good relationship, told me that, after the visit, I could expect everything.

I’m not working at the moment. If you are convicted, you can’t even work as a cashier at Tesco because they want you to have clean criminal record. Neither can I work as a security guard in a mall for five zloty per hour.

Have the verdicts made you stop smoking marijuana?

Honestly? No. To be clear, I believe that marijuana is not a drug. Marijuana is a stimulant. That is my opinion, I have a right to think so. Adults have the right to decide whether they wish to drink alcohol or relax by smoking marijuana. Among my friends, ten out of ten smoke. Since the introduction of the law prohibiting the possession of marijuana, its consumption hasn’t decreased because the forbidden fruit tastes better.

How often do you smoke?

I have been smoking marijuana since my first year at high school. I’m not physically addicted and if I don’t have access to it, then I don’t make any efforts to get it, and I don’t think about it. I have no aches, no seizures or shaking hands. I smoke with larger or smaller gaps. The largest gap has lasted for more than four years. If someone is mentally resilient and wants to discontinue smoking, it can be done. I’ve never gone to any clinic or doctors, but I know that there is a possibility like that. Basically, I now smoke once or twice a week at social gatherings and events. I certainly wouldn’t allow myself to use marijuana while sitting at home on my own because it’s not the point.

Some politicians, while reading this, could accuse you of promoting drugs, which has recently happened to Kora [Polish singer; translator’s note].

I know her personally and I respect her. When she was caught in the act, the issue attracted a lot of publicity. Tabloids and newspapers were harping on about her because she was a hot topic and their sales would go up as a result. Strangely, when thousands of people, young and old, were convicted of drug possession, then no one talked about it. No one was interested apart from the Wolne Konopie Association [Free Cannabis; translator’s note] and their marches, which will probably be banned. The truth is that Kora won’t go to jail. The only thing that she may face is a suspended penalty because she’s first-time offender. The case will be dismissed immediately.

During the work on the Act on Preventing Drug Addiction, the Senate has put forward a proposal to finally clarify what a small amount of drugs should be. It hasn’t been done so far, since, because of these stupid quantities like 0.2 gram, the prosecution wouldn’t be able to initiate the proceedings. Kora had 2.8 grams, and her verdict says it’s a small amount as well.

Having said that, I’m not trying to promote drugs, planting it and consuming marijuana. The point is to show what kind of law we have, how it is used and what the realistic consequences of it are.