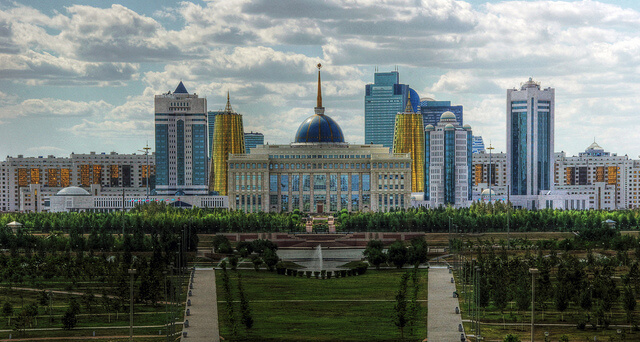 In Kazakhstan, the power of citizens to resist authoritarianism has been dealt a significant blow. On November 28, two major Kazakh land activists, Max Bokayev and Talgat Ayanov, were sentenced to five years in prison on charges of organising unsanctioned protests and inciting social discord.

Bokayev and Ayanov were arrested following large-scale land protests in the country in April and May. Normally very cautious, in this instance, the regime failed to spot the potential threat of online activism in time, and therefore let protests unfold.

The jailing of the two men shows the government of President Nursultan Nazarbayev well understands that it can no longer underestimate the power of new forms of civic activism.

The growth of online activism

The Central Asian authoritarian state has not tolerated political opposition for years. It jails journalists, frequently violates citizens’ civil liberties and stifles every other form of liberal democracy.

But beneath the surface, a new era of civic activism has been growing since 2010, coming to fruition in the land protests of April 2016.

Developments in technology, increasing access to the internet, and the growing popularity of social media equipped Kazakh civil society groups with tools to even out the battle against an overly centralised and corrupt government.

Long gone are the days when there were a handful of civic activists in the republic; no longer is there a minority of people who use the internet only for entertainment purposes. Political apathy has been rapidly waning and being replaced with political cynicism.

Nowadays, you do not have to be affiliated with any organisation or social movement to defend your rights to freedom of information, protection of environment or access to public health. A computer with internet access and a social media account is enough for raising public awareness, articulating interests, and mobilising discontent.

People are more aware of the government’s limitations, and their own lack of rights. One recent survey showed that the majority of people in Kazakhstan evaluate the government’s fight against corruption as poor. Another survey among young people indicated that more than 60% of respondents do not believe in their own ability to influence power.

All of these developments mean that more and more people have become engaged in politics through signing online petitions or participating in protests. An anti-pension reform movement in 2013 involved all of these forms of political participation and mobilised masses that were previously politically alienated.

Political memes have also boomed in Kazakhstan, making politics more accessible to ordinary people. The pension reform protests gave birth to numerous memes showing that government did not have a valid reason to increase women’s pension age from 58 to 63. These memes went viral and pension reform became the most discussed issue of the day.

The success of this new form of activism was never clearer than in the wave of protests that hit Kazakhstan’s cities and towns in April and May 2016, and which have now landed two organisers in jail.

Protesters were concerned that amendments to the land code would let foreigners, particularly Chinese businesses, rent agricultural land for 25 years. Many perceived this as a threat to national sovereignty. Alarmed that the situation could get out of control as it did during the 2011 Zhanaozen oil-workers’ protests, the president intervened and announced a moratorium on land reform.

The government sent this message in May, informing the population that land code amendments had been put on hold.

Protest mobilisation began online and significantly benefited from WhatsApp. The use of mobile phones for civic activism expanded the movement’s support base by directly appealing to individual users. It’s telling also that the government announced its u-turn on the land reform policy by texting citizens directly.

The land reform protests were unprecedented in scale, taking place simultaneously in several cities, an unusual feature of demonstrations in Kazakhstan.

Ultimately, civil society celebrated a major victory when authorities officially responded by changing the policy, a very rare occurrence in Kazakh politics. Even the arrested activists admit that the protest campaign was successful in making people’s voices heard.

The regime strikes back

But this new online movement could be under serious threat.

A set of amendments to the country’s media legislation in 2012 and criminal code in 2014 has already put severe restrictions on material posted on social media and blogs.

The publication of materials libelling the president and his family members, and materials that could cause inter-ethnic and social discord are strictly forbidden. As a result arrests and prosecutions of bloggers and online activists have become the norm.

Now, following the land reform protests, the government has been devising new legislative and technological barriers to “clean” the Kazakh internet. The Ministry of Development and Innovation is planning to launch a Great Firewall (named after China’s Great Firewall) that will allow national law enforcement to monitor and block all internet traffic on desktop and mobile devices.

If these plans materialise, Kazakh internet users will not be able to access websites such as Facebook and Google.

On the other side, the government has established a new Ministry of Information and Communications, with the novel responsibility of informing society of state policies.

Kazakh authorities have gone online, creating accounts on Facebook and Twitter. Almaty City’s Instagram account tries to connect with its constituency by responding to citizens’ concerns and demands. Meanwhile, activists are under threat of jail for using these same platforms.

Ultimately, it was a no-brainer for the Kazakh regime to sentence Bokayev and Ayan.

The government needed to save face after a humiliating defeat in passing the land code amendments. And the prosecution of activists is supposed to send a message to others that the authorities have no intention of opening up the political system.

With its Great Firewall initiative, the regime is only getting more serious about eliminating new forms of activism.

Supporters of jailed activists intend to protest the court’s verdict. But activists have not yet elaborated a strategy for coping with the Great Firewall. As usual in Kazakhstan, the cycle of protest and repression continues.

This article was originally published on The Conversation. Read the original article.

Nurseit Niyazbekov
Dr Nurseit Niyazbekov holds PhD in Politics and MSc in Sociology from the University of Oxford. Right now he is teaching and researching as an Assistant Professor in the Department of Public Administration at KIMEP University in Kazakhstan. Before that he used to work in various other universities in Kazakhstan as well as international and non-governmental organizations. He often consults international think tanks and researchers on issues related to political risks, social welfare and protests in Kazakhstan.
> see other articles <