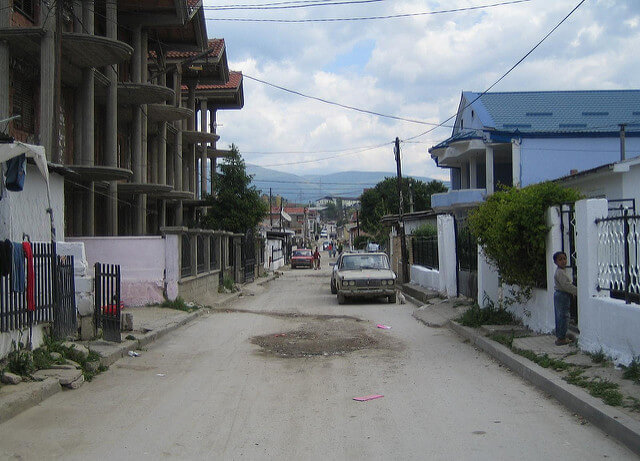 Macedonia is the only state in the world where the Romani community is officially recognized as a nation. The rights of Romani people in Macedonia are part of the constitution; they have their own representatives in the police structures and parliament, their own Romani radio, TV stations and a self-governing district in which the Romani language is officially recognized. Despite the obvious difficulties it encounters, this community in Macedonia is in a better position than Romani communities in other countries in the region or even Europe as a whole. This is the visible situation of the Romani people in the Republic of Macedonia, at least formally.

On the other hand, in the name of multiculturalism, decisions about “recognition” and “identity” still form the topic of publications and conferences in Macedonia. According to the European Union Ambassador to the Republic of Macedonia, 28% of the country’s Romani people live below the poverty line. Up to 50% of Romani homes were built without planning permission. Thousands of children from the mainly Romani district of Shuto Orizari in Skopje do not have access to running water, education or health care and the life-expectancy of Romani people is 15 years less than that of other citizens. While government projects aimed at the assimilation of the Romani community exist, in practice they are often only marketing campaigns. These facts illuminate another, darker, aspect of the lives of Macedonia’s Romani population.

A cursory glance at recent history may lead to the conclusion that the Romani community in Macedonia has accumulated a certain degree of symbolic social and cultural capital over time. From this perspective their situation is represented today as a positive starting position for constructive integration; they are recognized as a nation, with the right to education in the Romani language and their own self-governed neighborhood, amongst other gains.

Without equal access to key infrastructure, health care and public institutions, there is no chance of building an integrated society.

However, by many standards, what is probably the largest Romani borough in Europe, Shuto Orizari, popularly known as ‘Shutka’, is the poorest community as social inequality grows in Macedonia. Shutka is a part of Skopje. While it may not be physically isolated from the city, Shutka is effectively isolated by obstacles such as lack of public transport and distance from public institutions like health care. These invisible walls shape the perception of the wider population and symbolize the marginal status of the Romani community in social life.

This reflection of prejudice in the ordering of urban space has been explained in various ways: marginalization, segregation, exclusion, and, more recently, ghettoization. The variety of such terms and the weight of their political and emotional associations lead to imprecision and obscure the reality of the situation. The way in which the space of the Romani has been abandoned by welfare and social services, but not by the repressive apparatus of the state, suggests that these peripheral areas of public life, rather than creating a ghetto, reflect the construction of an anti-ghetto or hyper-ghetto.

‘Ghettoization’ refers to the rising ethnic homogeneity which results from members of a certain community being forced to live in a space separated and reserved only for them. However this is the exact opposite of the trends we observe in marginalized urban communities in Europe today. According to a 2002 census, 22 017 people live in Shuto Orizari, including 13 342 Roma, 6 675 Albanians and 1 438 Macedonians. This growing diversity is visible in Western Europe too; La Courneuve, a town north-east of Paris, is inhabited by 35,000 residents from sixty-two nations. Shuto Orizari, then, is a modern, hyperghetto; it has no economic functionand lacks infrastructure. This, in turn, has resulted in an increase in unemployment, criminality and an expansion of the ‘gray’market.

The hyperghetto, according to Loïc Wacquant, is characterized by the simultaneous degradation of two inter-related areas of public life: class and race. The modern anti-ghetto, therefore, is not an easily identifiable space. It is a site in which those who society perceives as economically or politically useless are dumped, ‘as result of public policy that weds the invisible hand of the market to the iron fist of the penal state’, according to Wacquant.

Capital organizes the city by means of economic mechanisms; in particular, the housing market and government institutions. Developers and investors regulate the order of socio-spatial distribution. State bureaucracy builds social housing and authorizes investment in the construction of elite housing estates. Under pressure from economic demand and class divisions, therefore, the economic stratification between different neighbourhoods widens.

It is important to consider the historical roots of social differentiation and the socio-spatial layout of residential areas. However, the processes of social transformation that create new social environments within certain social systems are more important still. It would be a grave oversight not to mention that the ruling party in Macedonia has spent 22% of the year’s budget to erect over a hundred statues in the city center. At the same time, the unemployment rate in the Shutka district has reached 73% and 70% of the community live in poor, substandard housing conditions. State policy, therefore, highlights the material and symbolic inequality of power in the social structure of Skopje.

Nonetheless, in a country known as a tax haven, where 14% of the population lives on less than two dollars a day, it would be naive to ignore the influence of the state’s neoliberal policies on socio-economic dynamics. A seemingly never-ending economic transition has resulted in the greatest economic inequality, not only in Europe, but also in relation to those countries which have arisen after the collapse of the Soviet Union.

The development of the textile and garment industry has been encouraged by the prospect of an extremely cheap workforce and low taxes. Today, there are more than five hundred such companies in Macedonia. However, in spite of bureaucratic and economic concessions to investors, salaries are still not paid on time and, according to the Center for Research and Policy Making, up to 40% of the salary is unregulated and untaxed. Such practices amount to a loss of revenue in the state budget of three million euros. Those employed without documented contracts are not entitled to any social benefits; they receive neither security in the workplace nor health care provision (poor as it is). In the case of the Romani community, the situation is even more complicated. Many Romani people do not have Macedonian citizenship, which would entitle them to legal employment or enrollment in public schools. Without equal access to key infrastructure, health care and public institutions, there is no chance of building an integrated society.

In the era of socialist Macedonia, employees had a guaranteed contract of employment, retirement, paid overtime, “a thirteenth cheque”, a hot meal in and transport to the workplace. According to the Clean Clothes Campaign workers in Macedonia’s garment industry not only lack these benefits, but, given the collapse in the exchange rate, wages have actually fallen by more than a half. The average salary is usually the national minimum, 143 euros. This is the lowest average salary in this region; for the sake of comparison, in Albania the average salary is 160 euros; in Kosovo, 170 euros; and in Greece, 683 euros.

A declining standard of health care provision has coincided with a decrease in other welfare benefits. In the period from 2007 to 2012 social services were cut by 40% though the number of families receiving social assistance is almost the same as that in more developed Slovenia. This trend is very likely due to the fact that income tax in Macedonia has been reduced to 10% of what it was.

We can assume that tax revenue from just 10% of national income cannot go far beyond the basic functions of administration of the police or the judicial system and that, consequently, there is not much left to finance education and health care. One solution seems to have been the provision of low wages in public services for the police, judges, teachers, and doctors. In this case services do not function properly, creating a vicious circle of weak public services and distrust of the state. Therefore, it is not cultural difference that constitutes the ghetto, but the perceived distance of a certain community from the state. The systemic neglect of these communities by the political elite and the state has resulted in ‘hyper-ghettoization’. Such marginalization, whether political, economic or cultural, is increased by social policies which deepen poverty and instability. Such policies range from urban planning, economic regulation, fiscal policy and infrastructural investment to the spatially differentiated provision of core public goods such as housing, education, health, welfare and policing.

Andrzej Mirga and Nicolae Gheorghe, researchers and activists supporting the rights of Romani communities, have noted that the problem of discrimination calls for reasonable and balanced public debate. They claim that this debate is hindered by a lack of education and investment in Romani communities.

Shuto Orizari is one of the most underdeveloped neighborhoods in Macedonia. The mayor of the district, Elvis Bajram, in a 2014 pamphlet setting out his policy ambitions, mentions the desire to attract investors and to build pedestrian crossings and traffic lights. However, there is not a single ATM in the suburban area and the total length of paved roads is 33 kilometers, upon which no traffic rules are enforced. Thus, the intentions and competence of the district’s authorities fall under suspicion.

The systemic neglect of these communities by the political elite and the state has resulted in ‘hyper-ghettoization’.

In the same pamphlet one of the fifteen chapters is called ‘Vision’. Vision, as we can read in the text, ‘refers to the perfect situation, which can only be achieved over time, in an ideal world’. The vision of the future presented here is as follows: ‘Shuto Orizari is a modern district with sustainable economic development, developed infrastructure and a high quality of life’. And yet, in lieu of the development of local entrepreneurship and new jobs, Amdi Bajram, a business man involved in corruption scandals and father of the current mayor, Elvis, has built what is probably the biggest “Romani mosque” in the world.

One is left to consider just how far from reality this perspective lies, and to think about the worth of such optimistic rhetoric; is the nature of this “ideal world” eschatological, revolutionary or merely hypothetical. In the final analysis, Shuto Orizari, instead of becoming “a modern district”, is, in fact, a hyperghetto.

If nothing breaks the political impasse in which the Romani in Macedonia are trapped, it is likely that the neighborhood will remain a so-called gypsy ghetto for a long time. Should the political dynasty of the Bajram family continue, with the candidacy of the younger son, Gianni Versace, the situation is unlikely to change. The current state of affairs certainly suits them. Their support for the existing system, however it may be defined, indicates a lack of interest in the possibilities for change, in the future of the children of this district. Their authority is based on lawlessness. And such corrupted local magnates merely serve to reinforce the negative stereotypes of the Romani community and to entrench the social impact of this prejudice.

As Mirga and Gheorghe point out, there are, in fact, well-educated young Romani in Macedonia. However, for some reason they do not, or cannot become involved in these debates. The present political impasse must first be broken, at the state level, by an ongoing ‘colourful revolution’, and upcoming governmental elections.

Marek Matyjanka
Graduated in Balkan studies. He studied in Poznan, Zagreb and Skopje. Resides and works in Bucharest.
> see other articles <