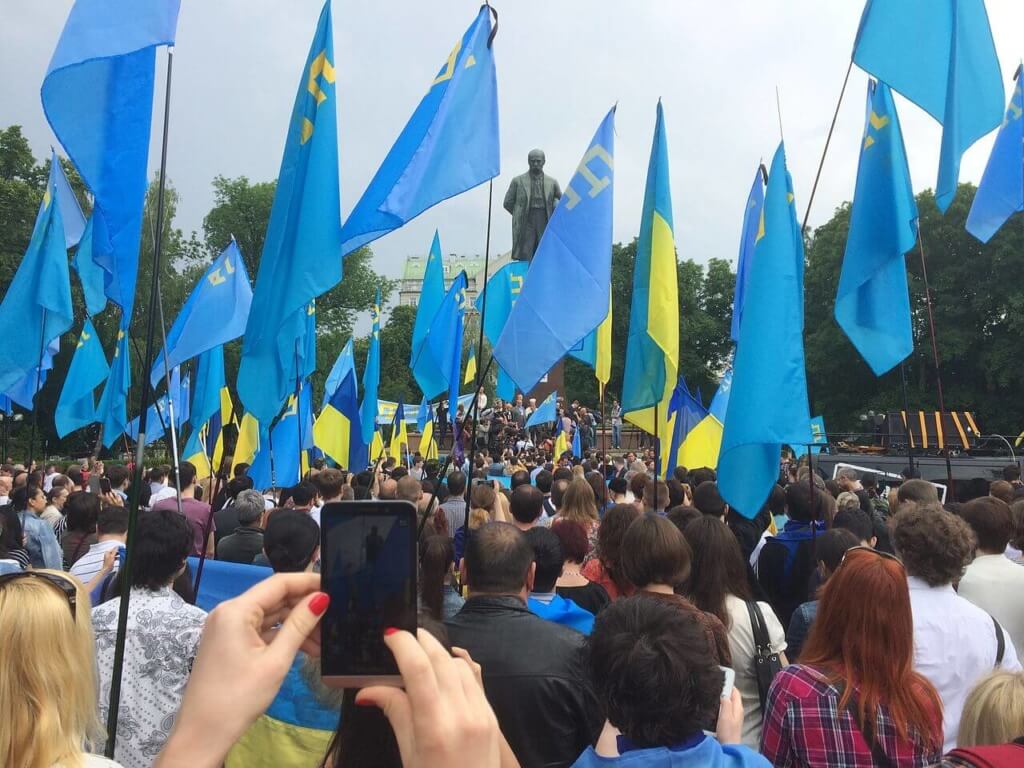 Jim Blackburn: Spring 2016 marks the two year anniversary of the illegal annexation of Crimea by the Russian Federation. How have things changed in these two years for the indigenous Crimean Tatar community, both on the peninsula and those in the diaspora?

Ayla Bakkalli: A lot has happened as we enter into the second year of the attempted illegal annexation of Crimea that we consider still part of Ukraine. Russia has been implementing a policy of systematically ignoring the fundamental rights of indigenous Crimean Tatars within their homeland. The recent raids in the Dzhankoy district this February by Russian authorities, forcibly entering into Crimean Tatar homes without notice, has caused alarm both for the Crimean Tatar leadership and the World Congress of Crimean Tatars with these senseless arrests that are causing much fear and unrest.

is the Crimean Tatar Mejlis’ representative in the United States. She is a member of the World Congress of Crimean Tatars and an Adviser to the Permanent Mission of Ukraine for the United Nations on Indigenous Matters.

Crimean Tatars here in New York have pleaded for help on behalf of their relatives who were among those whose homes were raided. Fear in Crimea has even reached the Crimean Tatar community in Brooklyn, which is closely following what is happening on the ground in Crimea.  One of the families noted: “I know my family; they are just simply trying to live their lives in their homeland as indigenous people. Why are they doing this? Why?”

Moreover, the militarisation of the Crimean peninsula has been accelerating at an alarming level, which has been of high concern for the indigenous Crimean Tatar leadership, as Crimea is becoming increasingly isolated from the media and international community. There are several upcoming human rights reports that will be released on the situation in Crimea this year; within these reports the state of the Crimean Tatars is highlighted, stating that it needs to be of greater concern to human rights advocates. This report follows the European Parliament’s recent adoption of the February 4th, 2016 resolution on the Crimean Tatars’ human rights situation. It is for the most part a detailed document, item by item, outlining the particulars of the rights of Crimean Tatars as an indigenous people of Crimea and the mechanism relevant in their protection given that Crimea was not even mentioned within the Minsk Agreements.

Life for the Crimean Tatars in their second year of occupation has been progressively moving from worse to unbearable.

As a Crimean Tatar, I am trying to gauge if the EU and the rest of the West, including Turkey, are realising the increase of and continuing militarisation of the Crimean peninsula. Ukraine’s State Security Service (SBU) reported at a briefing in Kyiv on February 17th of this year that heavy military equipment had arrived in Crimea (including over a dozen helicopters and a whole new battalion). This along with the installation of recent missile launch platforms which have the capacity of carrying out and firing nuclear missiles, was seen via a video in which Russian forces were transporting the facilities from Kerch.

I am also wondering, given the historical precedent of Crimea’s great strategic significance, about the entire peninsula’s militarisation, as this should highly concern the international community, particularly Turkey. Crimea’s importance for Moscow is that it will serve as a springboard to the south into the Mediterranean and Middle East. If Moscow wants to have an impact on the Mediterranean, it can only do so from the Crimean peninsula. Russia’s shift has been seen most recently with the war in Syria, with Russia having a much higher military and naval presence in the Mediterranean.

Volodymyr Yelchenko, the Permanent Representative of Ukraine to the United Nations, raised this concern at the UN Security Council Meeting this year on February 15th, in which he stated his concern that a motion towards the nuclear militarisation of the peninsula is moving forward quickly. This is a threat to the region and to world peace as a whole. Mustafa Dzhemilev, the Crimean Tatars’ leader and the Commissioner President of Ukraine on Crimean Tatar Affairs, attended the Parliamentary Assembly of the European Council calling for the creation of an international group that will include the countries that signed the Budapest Memorandum of 1994, in order to work towards an immediate de-occupation of the Crimean Peninsula.

Can you explain more about the role of the Crimean Tatar Mejlis? And how it has been functioning or treated since the illegal annexation of Crimea two years ago?

This attempt to ban the Mejlis amounts to ethnic, cultural and political discrimination (on the grounds of banning the political freedoms of opinion and expression) towards the entire Crimean Tatar people.

The leaders of the Crimean Tatar people – Mustafa Dzhemilev (the first chairman of the Mejlis) and Refat Chubarov (the current chairman) – are currently banned from entering their indigenous homeland simply because they expressed an opposition towards Russia’s seizure of their homeland.

The Mejlis received repeated threats that its “activities on Russian soil will be banned” in connection with protest actions and the failure of the Crimean people to subjugate themselves to the Russian government (this was in reference to peaceful actions in the form of demonstrations and meetings). The reference to the banning does not just affect the self-governing body of the Crimean Tatar people, but also its elected representatives. Repression apparently also applies to anyone who participates in the activities of elected entities that run communities, nominate representatives and implement decisions adopted over the past 25 years regarding the lives of the indigenous Crimean Tatar people.

This attempt to ban the Mejlis amounts to ethnic, cultural and political discrimination (on the grounds of banning the political freedoms of opinion and expression) towards the entire Crimean Tatar people. It is important to keep in mind what has recently occurred in Crimea when the First Deputy Chairman of the Mejlis, Nariman Dzhelal, received a court order “to ban the activities of public associations.” Nariman responded: “It is important to remember that the Mejlis is not just a structure. It is an idea, a distinct symbol, a set of specific actions. And these kinds of direct, crude bans don’t change anything, because this national movement has always found a form that corresponds to a concrete moment in history, to concrete government actions; as a result, this period of history is no different. Anyone who believes he is still responsible to his own people, who, through their votes, gave him the right to represent them, will continue to bear this responsibility in the future.”

Where have you found the most support for the Crimean Tatar cause? Have any of the reactions surprised or disappointed you in any way?

The Indigenous Crimean Tatars have been attending the UN Permanent Forum since 2005. Support for us has been growing since the illegal annexation of Crimea, especially by the Baltic States and Ukraine. As a matter of fact, the World Conference of Crimean Tatars board members meeting will be hosted in Vilnius, Lithuania, where members will meet with the Lithuanian president.

Estonia will launch a public diplomacy project in May 2016 with the UN during the UN Indigenous Peoples Forum. It will advocate human rights for the Crimean Tatars via public diplomacy in collaboration with the Office of the Commissioner of Crimean Tatar Affairs under President Petro Poreshenko of Ukraine in their international advocacy and diplomacy efforts. The project duration is from September 2015 to August 2017.

Also, it is very important to note that Ukraine adopted the UN Declaration on the Rights of Indigenous Peoples in 2014 underlining that only the indigenous Crimean Tatars as indigenous Ukrainians hold a right to self-determination. I was also very pleased that the Unites States passed the Anti-Annexation of Crimea Act. I, along with the Ukrainian Congress Committee of America’ representatives, advocated for the US House Resolution on the Crimea Annexation Non-Recognition Act of 2014, introduced in Congress as a response to the illegal annexation of Crimea by Russia.

I believe the international community came to the realisation that Ukraine’s independence was not going to be easy to maintain when Crimea was illegally annexed. But at the same time, neither Ukraine nor the West was going to back down. I believe the issue is not Ukraine’s independence, but rather where does Russia see itself. Does it view itself as European or Asian? And this process of Russia’s evolution has to be undergone by itself. Ukraine has claimed its distinct identity as a nation without Russia, and now Russia has to discover its own identity without Ukraine. Overall, we were actually surprised how the entire international community supported and continues to support the indigenous Crimean Tatars.

You have been a dedicated and passionate advocate for the Crimean Tatars (I personally remember you speaking at Wesleyan University in 2014 and it left an impression on me). How did you become involved with the Crimean Tatar cause?

My parents are indigenous Crimean Tatars and I am as well. They raised me to always remember Crimea and its indigenous people. My father was born in Keslev (Evpotaria) and my mother in Karasupazar, Crimea. They have shared their tragic experiences with me which have left a footprint on my heart to always continue the struggle till we, as indigenous people, are freely united with our homeland. So we can begin to live normally as we deserve, as does everyone.

Jim Blackburn
Jim Blackburn is an editorial researcher at New Eastern Europe. He is also a writer, journalist, and book reviewer.
> see other articles <