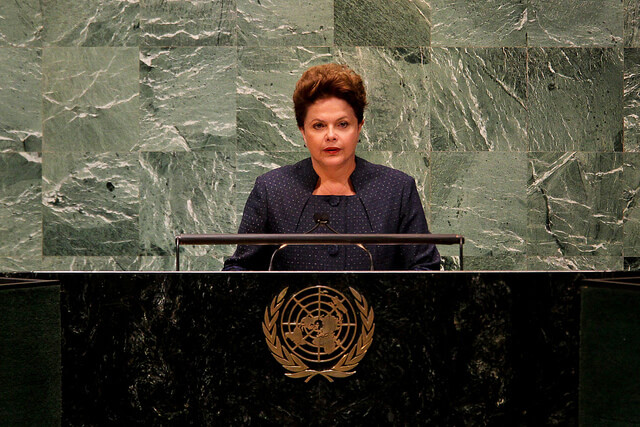 Brazil is in the midst of its greatest political and economic crisis of recent years, just a few days away from the beginning of the Olympic Games in Rio on August 5th. President Dilma Rousseff faces impeachment on charges of neglecting “fiscal responsibility”.  Her mandate has been suspended in what is considered a Congressional coup. Her vice president, installed by Congress in her place, is implementing a conservative agenda that puts the important achievements of Brazil’s recent democratic period at risk.

Brazil’s system of government is known as “coalitional presidentialism”; a system where it is virtually impossible for a president to maintain the political stability necessary to pass their bills without a clear majority in Congress. This system has worked well until now, especially during the Lula era (2003-2010). Lula was the president from the Workers’ Party (PT) who implemented a liberal, mildly progressive agenda, distinctive for its successful programs combating poverty and leading to greater social inclusion.

Dilma Rousseff was elected in 2010 as Lula’s successor. She was re-elected in 2014, but this time with only a narrow electoral majority, little more than 3% over her opponent Aécio Neves, of the Brazilian Social Democracy Party (PSDB). The 2014 ballot also elected one of the most conservative legislatures in Brazilian history. This posed a problem for the weakened Rousseff governing coalition. It had to yield to the demands of right-wing sectors such as the BBB (Bullet, Beef, and Bible) Caucus, composed of pro-gun, ruralist and religious lawmakers.

Rousseff lacks support in Congress and has been faced with an overt campaign against her led by the media, which reflects the discontent of the middle and upper classes with the growing economic crisis.

Rousseff lacks support in Congress and has been faced with an overt campaign against her led by major media conglomerates, which reflects the discontent of the middle and upper classes with the growing economic crisis. Lacking the support necessary to maintain control, on April 17 impeachment proceedings against Rousseff began in the lower house of Brazil’s bicameral Congress, on the pretext that she had used a budgetary technique known in Brazil as “fiscal pedaling”. This consists of authorization by presidential decree of the deferral of governemnt funds for social programmes to public banks.  Previous governments have resorted to this technique. At worst it is a minor administrative misdemeanor.

However, Rousseff’s mandate is suspended until the Senate takes the final decision on the impeachment process in a session which is supposed to take place on August 25 or 26. The acting president, Michel Temer, of the Brazilian Democratic Movement Party (PMDB), has created an interim government that threatens to efface many important achievements of the past thirteen years of PT government. Just after Temer took power as interim President he announced a major ministerial reform. Besides appointing the first all-male, all-white cabinet since the end of the military dictatorship in 1985, the reform included the closure of the Ministry of Culture – later repealed, after protests and the occupation of public buildings by artists and intellectuals – and the absorption of the Ministry of Science and Technology by the Ministry of Telecommunications.

Among Temer’s main projects, modelled on his party’s manifesto, “A Bridge to the Future”, there is a proposal to set a minimum retirement age of 70 years (in a country with an average life expectancy of 76 years), alongside budget cuts in most areas of government and changes in protective labour laws. In a recent meeting, at which the interim president was present, the president of the National Confederation of Industry of Brazil (CNI) suggested that Brazil’s labour system should be “open to changes”, such as raising the maximum working week to 80 hours, “like in the legislation now passed in France” (the changes proposed in France actually increased the maximum working week to 60 hours, and were met with resistance from workers’ movements). The reforms announced by Temer are “unpopular”, but they will be implemented “even if there are protests”, he declared.

The trial of a democratically elected President on the pretext of an alleged “crime of responsibility”, a pretext challenged by the Prosecutor General of Brazil, and the rise of an openly conservative interim government, which risks becoming permanent, are only by-products of a deeper, structural change taking place in Brazil’s public sphere.  The majority of the electoral candidates in the last elections have been right-wing, and discourse such as that of former soldier, now congressman, Jair Bolsonaro (Social Christian Party, PSC) have gained national traction. Bolsonaro, who is also a potential candidate for the next presidential election, represents a growing number of people who oppose same-sex unions, affirmative action, and the decriminalization of drugs, and advocate for the death penalty and the installation of a military government. Bolsonaro went so far as far to dedicate his vote in the impeachment trial to the memory of Colonel Brilhante Ustra, the head of the Department of Information Operations during the military dictatorship, under whose supervision at least 300 people were tortured.

The resurgence of discourses in the public sphere from what scholars have been calling “a Right not afraid to say its name” are leading to very concrete consequences. The LGBT population, for example, is facing increasing violence. Statistics published recently by the advocacy group, Grupo Gay da Bahia, report that, in the past four years alone, there has been roughly one death per day related to violence against gay and transgender people. Police brutality is also endemic. Amnesty International reports that more than 2,500 people were killed in Rio by the police since 2009, when the city was chosen to host the Olympics; most of them black youths who live in favelas.

A conservative agenda has dominated the Brazilian public scene. The latest national debate is a prime example: the “Nonpartisan School” bill, a project aiming to “ban ideological preaching” by teachers in the public education system. The bill presented in the Senate is highly ideological itself. It prohibits teachers from ”promoting their ideological, religious, moral, and political interests, opinions, conceptions, and preferences” to their students. Aimed at what proponents see as left-wing indoctrination in schools, this McCarthyist, technocrat project risks becoming an instrument of political persecution used against teachers and further undermines an already malfunctioning public education system in the country. The results of a public consultation made available by the Senate showed that popular approval of this project is high, despite opposition campaigns by left-wing groups.

However,  in the wider context of the challenges facing Brazil today it is of minor significance whether  Rousseff or Temer is in charge. It is the loss of the historic rights and social provisions of the working class and minorities, achieved at a high cost, which is at stake. Though Temer’s government is the current face of this threat, the Left is no more capable of providing the alternatives we need. Leading Workers’ Party politicians are facing accusations of involvement in corruption scandals during both the Lula and Rousseff governments. Rousseff is also heavily criticized by the left-wing opposition for having been elected on account of her Left campaign platform and then making huge concessions to conservative sectors during her term.

The apparent lack of any concrete political vision for Brazil has led to a general discrediting of the political system as a whole.

Minor left-wing parties, such as the Socialism and Liberty Party (PSOL), despite being small and mostly concentrated on a regional, rather than national, platform, have been important in the articulation of progressive alternatives on the Left. PSOL, though, has been accused of “playing the Right’s game” in levelling such criticism at PT and Rousseff. But this accusation only demonstrates the discursive colonization that has taken place on the Left; after thirteen years in power PT seems to claim for itself the position of exclusive advocate of left-wing ideology.

The apparent lack of any concrete political vision for Brazil has led to a general discrediting of the political system as a whole. In cases like this, it may be easier for messianic leaders to sway public opinion. In Brazil’s case this trend has manifested itself in growing approval for Lula, or at least an idealized image of him. Recent polls suggest that, among the major political figures, he remains the politician with the highest general support as presidential candidate in the country (should he decide to run in the 2018 election). With no viable projects on the horizon, and the only potential leader emerging from the political scene of a decade ago, inertia seems to be the strongest political force in Brazil today.

Ítalo Alves is a graduate of Law and Philosophy at the Catholic University in Porto Alegre, Brazil. He works as a researcher for the National Council for Scientific and Technological Development, with a project on the interaction of discourse in the public sphere. He has previously worked as a research assistant at Carleton University’s School of Public Policy and Administration.