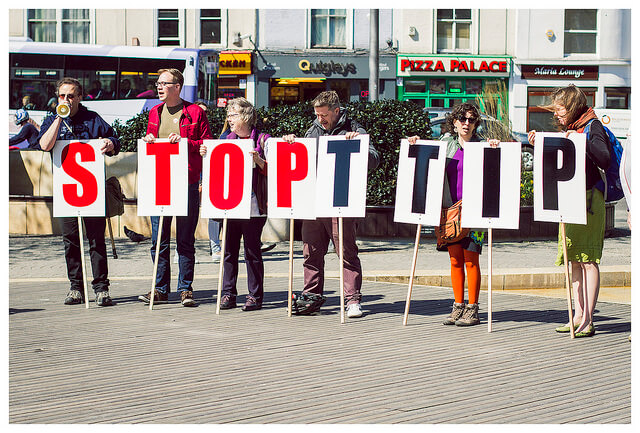 On his recent visit to Germany, Barack Obama emphasized that the economic aspects of the treaty were strategic in their own right. While almost 100,000 people protested against TTIP on the streets of Hannover, president Obama was saying: ‘TTIP has larger, strategic benefits. At a time of widening inequalities in the world, including in Europe, TTIP will help encourage growth across the 28 nations of the EU, including southern Europe. At a time when some are questioning the future of European integration, TTIP will encourage the higher long-term economic growth Europe needs to create more jobs, including jobs for our young people.’

So much for wishful thinking. Much has already been written about the economic benefits which will result from TTIP as the American administration and the European Commission have presented it. The promised benefits might not be as great as they suggest, if there are any at all. Studies have suggested that as many as several hundred thousand jobs might be lost in Europe and that the negative impact of this deal will disproportionately affect the weakest economies. TTIP may contribute to widening inequalities not only in Europe and the United States, but also between the West (USA and the European Union) and other countries. Because of this economic controversy, supporters of the treaty say that the economic impact of TTIP should not be overestimated, while more attention should be paid to the political dimension. Proponents emphasize that TTIP has mainly geopolitical significance and its function will be to signal to the rest of the world that the West, as a community, based not only on common economic interests but also on common values, is politically cohesive and capable of acting decisively.

What would be the aim of demonstrating unity and an ability to work together other than a flexing of diplomatic muscles? This question was also answered by Barack Obama. It is about the export of Western values: ‘At a time when other countries are trying to shape global trade to their advantage, our countries – which make up nearly half the global economy – have the opportunity to write the rules for trade in a way that reflects our values, like rule of law, transparency, and respect for human rights.’

Once again, this sounds great on paper. However, the crucial problem is what the promotion and transfer of ‘Western values’ into areas other than the economy would look like in practice. Free trade isn’t necessarily accompanied by the promotion of democracy and human rights.

Furthermore, a fundamental question needs to be addressed; which, supposedly common, values are we actually talking about in the context of TTIP?

TTIP would pave the way for the West to shape globalization in the 21st century. Thanks to TTIP, the West would keep its role as the architect of world order and arbiter of the international agenda. TTIP would therefore serve as a model which helps to extend the most important principles of the post-Cold War global economic order. This model is especially important in the light of the growing economic influence of the BRICS countries (Brazil, Russia, India, China, and South Africa). The BRICS countries are ever more strongly questioning the existing global geopolitical and geo-economic architecture. Intimidated by the power of the West which is propelled by the TTIP engine, and also the TPP (Trans-Pacific Partnership) signed by the United States with a number of Pacific countries, contenders for influence in the international arena would be more willing to adapt to a world order designed to a large extent by the West. Does TTIP really have such instrumental influence? It is unlikely, especially given that TTIP doesn’t seem to offer any significant economic impulse that could form the basis for a political renewal of the West. This is why it is hard to imagine that the leaders of the Global South would abandon a path which gives them greater influence over global systems. The proof of this influence is a growing institutionalization within the framework of the BRICS multilateral organizations, which many Western analysts either fail to notice or to which they do not attach adequate significance.

European TTIP advocates demonstrate that the treaty could be Europe’s most important tool in influencing the processes of globalization, which are practically impossible to halt. In his book, The Globalization Paradox, Dani Rodrik, a Harvard professor from Turkey, states that in the contemporary world expanding globalization cannot coexist with national sovereignty and democracy. Therefore one must ask a fundamental question: what combination of values has been proposed to us in the form of TTIP? Unfortunately, it seems it might be a combination restricting both the democracy and the sovereignty of nation states in the name of the profits of corporations, trying to give large, multi-national corporations the rights that would enable them to interfere in nation-state political processes even more – processes in which only a nation’s citizens should participate directly. Is this vision of a “domesticated” globalized world really worthy of export to the rest of the world?

Although Barack Obama has indicated that he would like to finalize TTIP negotiations before the end of his term in office, the chances of achieving this are slim.

TTIP was intended as a signal of the unity of the transatlantic partnership of the West. However, amongst citizens and between states, the project provokes more misunderstanding and friction than consensus.

Resistance to the treaty is on the rise across Europe. The call of the ‘Stop TTIP’ coalition has been signed by nearly 3,5 million Europeans. Germany, the most important US partner in Europe, is the center of this social resistance. According to various estimates, between 150 and 250 thousand people protested in Berlin against TTIP in October 2015. It was the largest protest in Germany since the Iraq war.

Objections to the treaty are not only put forward by civic society citizen’s organizations, but also by nation-state politicians. French President François Hollande declared that France would not support the treaty in its current form. The French minister for foreign trade, Matthias Fekl, has stated that the United States offers Europe too little in exchange for the many concessions on her part and has called for a halt to the talks. Germany’s vice-chancellor, Sigmar Gabriel, said that the negotiations have failed. Many other officials from different countries, including the Visegrad Group (V4) states, have also raised concerns about the treaty’s provisions. Even if the negotiations were to succeed, in the light of the controversies surrounding the project, it is difficult to imagine that TTIP would receive the support of a majority of the European Parliament and of ruling parties in national parliaments that would be needed to ratify the treaty.

However, even if it were possible to finalize the signing of the agreement, it is not difficult to imagine a scenario in which this treaty fails to have anything in common with the strategic interests of the transatlantic community. That is, if we understand this community as something more than the common interests of American and European corporations. Today we can already see that the objections resulting from legitimate concerns, raised initially by social organizations and left-wing political groups, are increasingly used in Europe by far-right, nationalist and/or pro-Russian parties, such as the National Front in France or the Alternative for Germany (the American embodiment of which might be Donald Trump), as well as many other radical groups all over Europe and America.

One can see clearly that the neoliberal politics which TTIP supposedly develops to a higher level, produce – as Zygmunt Bauman, among others, has argued – losers and rejects, troubled by the feeling of uncertainty and humiliation, and a lack of agency. These tendencies might soon bring to power the unpredictable Trump and contribute to a further rise in isolationism in America, and as a consequence, to the deepening of the European Union crisis. The strategy behind the TTIP project, not to mention CETA (Comprehensive Economic and Trade Agreement), which might be interpreted as an indirect implementation of TTIP, seems to be completely ignoring these threats.

Indeed, Europe and the United States need a project that could breathe new life into the transatlantic family. Such a community, however, cannot be built on the values embodied by TTIP.

The failure of TTIP will be an embarrassing, but transient, blow to the image of the transatlantic community, but one from which it can recover and learn.

Its success, however, could have more serious, and long-lasting, negative consequences. What Europe and United States need is a TTIP treaty which currently runs against the grain: an agreement based on solidarity and the concept of sustainable development, which takes into account the poorest developing countries and climate protection. Only an agreement such as this would revitalize the transatlantic community and, at the same time, be worth “exporting” to the rest of the world.