The Trump team’s strident anti-intellectualism makes it all the more surprising, then, that members of the president’s National Security Council have now received a formal briefing on the Peloponnesian War. That war was fought between Athens, Sparta and their allies from 431-404 BCE—5,000 miles away from American shores and nearly 2,500 years ago.

The foreign policy specialist who spoke to the National Security Council was Graham Allison, a Harvard professor and author of Destined for War: Can America and China Escape Thucydides’ Trap? The idea of the “trap” hinges on Thucydides’ celebrated observation that, despite all the other reasons each side gave for the conflict, it was really “the rise of Athens and the fear that this instilled in Sparta that made war inevitable.” Allison’s work uses that line as a springboard for a generalization about human history: “When a rising power threatens to displace a ruling one, the most likely outcome is war.” Apparently, senior policy analysts now suspect that Thucydides holds clues to a cataclysmic war impending between the U.S. (Athens?) and China.

The neocons’ advocacy for American interventionist policies rested largely on an ideology of American exceptionalism.

Few Americans know much about Thucydides (or as Michael Crowley put it in his Politico article, “Most Americans probably don’t know Thucydides from Mephistopheles”). Thanks to the ancient historian’s renewed popularity in Washington circles (and a name check in the recent Wonder Woman film) Time magazine even decided to run a short article explaining just who he is.

Many commentators, though, have been quick to point out that Thucydides has long been a favorite among the country’s foreign policy wonks. During the Cold War, they worried what his observations about the Peloponnesian War meant for the fate of the U.S. and the U.S.S.R (the Athenians and the Spartans had also fought a number of “hot wars”). Thanks to the influence of prominent thinkers such as Leo Strauss and Donald Kagan, the History of the Peloponnesian War achieved near biblical status among neocons.

In the second half of the twentieth century, the neocons’ advocacy for American interventionist policies rested largely on an ideology of American exceptionalism. The Athenians of Pericles’ day were also convinced of their exceptionalism, and their city had a well-earned reputation for polypragmosyne, Ancient Greek for the habit of interfering in other people’s (or other states’) business. It’s easy to see, then, why American neocon intellectuals thought Thucydides was writing for them.

Yet foreign policy advisors with old neocon credentials aren’t the only ones on this new Thucydides bandwagon. Trump himself might not know Athens from Sparta, but White House Chief Strategist Steve Bannon is notorous for having the Peloponnesian War on his mind. Julia Jones, Bannon’s former writing partner, also told The Daily Beast that he used to talk “a lot about Sparta—how Sparta defeated Athens, he loved the story…The password on his [desktop] computer at his office at American Vantage Media in Santa Monica was ‘Sparta,’ in fact.”

Like Bannon himself (and Hitler, too), many white supremacists still especially admire ancient Sparta.

Bannon remains notorious for his former role as chairman of Breitbart News, which he once boasted was “the platform for the Alt-Right,” that is, the new wave of American white nationalists (many of whom are Trump supporters). Shortly after Trump’s election last November, American classicist Donna Zuckerberg wrote an influential article exposing the Alt-Right’s obsession with Roman, and especially Greek, antiquity. This past academic year, the white nationalist group “Identity Evropa” even plastered certain American college campuses with posters of ancient statues—white statues, that is—accompanied by the slogan “Protect Your Heritage.”

Like Bannon himself (and Hitler, too), many white supremacists still especially admire ancient Sparta. For them, ancient Sparta is, in the words of Cambridge historian Paul Cartledge, “proto-fascist.”All of this means that the government’s interest in the Peloponnesian War and the “Thucydides trap” now risks ensnaring Thucydides himself: in this case the trap is one of association with the likes of Steve Bannon and the white supremacist alt-right. 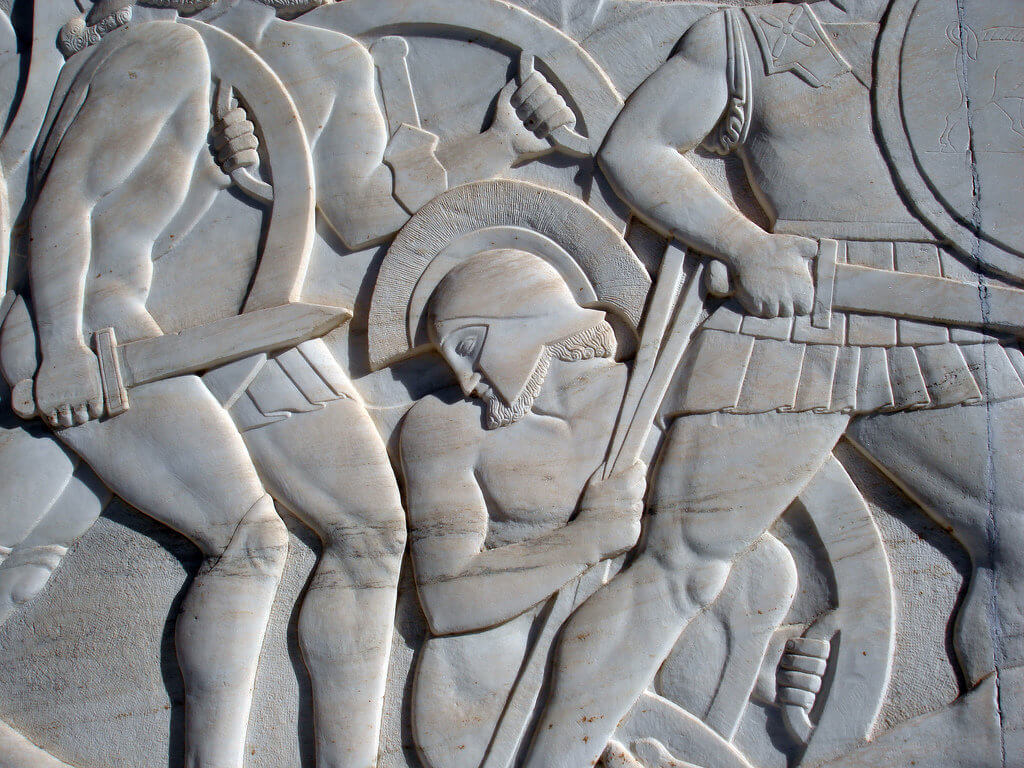 But if Trump’s advisors are truly interested in looking to ancient Greek authors for timeless insight into human behavior, they might do better these days to turn to Athenian tragedy.

The U.S. government, after all, has effectively given its stamp of approval to some of those ancient plays. Over the last decade, the Department of Defense has funded dozens of readings of Sophocles’ Ajax and Philoctetes at American “military sites.” These readings, performed as part of the Theater of War initiative, present Sophocles’ characters as sufferers—like many modern soldiers—of Post-Traumatic Stress Disorder. The performances aim to “de-stigmatize psychological injury” by painting the ancient Greeks, so well-remembered today for their military courage, as just as susceptible as anyone else to battle’s “invisible scars.”

Trump’s fixation on the laughter of others, especially of “other leaders and other countries” long predates his presidency.

But those ancient plays, and the Ajax in particular, also open windows into other aspects of human psychology. More specifically, they suggest that one of the American president’s particular preoccupations—with the “laughter” of other countries—flags a dangerous outcome for his own erratic behavior.

In his June 1 Rose-Garden statement on the US withdrawal from the Paris Climate Accord, the President boomed: “At what point does America get demeaned?  At what point do they start laughing at us as a country?   […]  We don’t want other leaders and other countries laughing at us anymore.  And they won’t be.  They won’t be.” And in fact, Trump’s fixation on the laughter of others, especially of “other leaders and other countries” long predates his presidency. In a 2011 piece in the Atlantic, Elspeth Reeve collected a number of instances of Trump’s “ridicule anxiety.”

In Sophocles’ Ajax, the tragic hero’s own ridicule anxiety becomes so profound that it drives him to violence against others, and, ultimately against himself. Words for laughter, and specifically for enemies’ laughter, occur more than ten times in the play. At line 367 Ajax declares “alas for their mockery! How I have been ridiculed!” By line 866, he is dead.

Trump proclaimed: “Oh I do love the Greeks…Don’t forget, I come from New York. That’s all I see, is Greeks.”

Other ancient tragic protagonists, spurred by the thought of their enemies’ laughter, also respond erratically and violently. Scorned by her husband Jason, Medea shares Ajax’s preoccupation. At line 797 of Euripides’ Medea, she reflects to the chorus that “it is unbearable to be laughed at by your enemies.” By line 1282 she has killed her two children. For the student of ancient Greek tragedy, the script is a familiar one: heroes consumed with paranoia about their enemies’ laughter react radically and fatally.

In a statement marking this year’s celebrations of Greek Independence Day, President Trump proclaimed “Oh I do love the Greeks…Don’t forget, I come from New York. That’s all I see, is Greeks.” These days Trump’s inner circle is supposedly reading up on their ancient Greek history. But for anyone who knows their Greek drama, too, all they see when they look at Trump is a tragedy waiting to unfold.

***
This article was first published on The Press Project (GR).