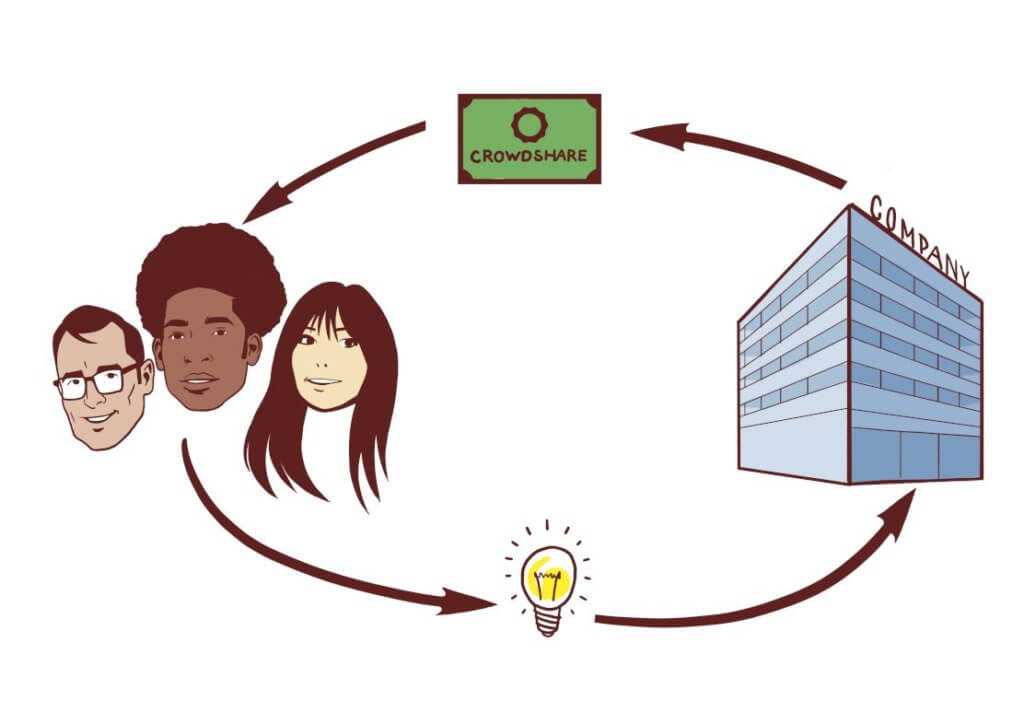 Crowdholding, a C2B co-creation application based in the Czech Republic, launches on March 17th. The online business platform allows companies and startups to gain knowledge, opinions, and feedback from the crowd (or “crowdholders”), and in return the business shares 1% of its revenue with the crowd, known as crowdshares. For the first time, entrepreneurs have a platform where the public validates their product even before it is put on the market, and for the first time the public will be able to receive revenue for their input and time.

On the application, the crowd is connected with entrepreneurs, allowing the crowd to give immediate feedback and ideas in exchange for future revenue. It allows startups – and in the future already established businesses – to begin sharing revenue with the public to crowdsource. And in a world where everything is becoming automated – even journalistic work, which is now being infiltrated by the use of artificial intelligence – there is a dire need to create new ways of making and distributing income.

In a world where everything is becoming automated, there is a dire need to create new ways of making and distributing income.

The gap between the rich and the poor has continued to increase drastically in recent years. In 2010, 43 people represented half the world’s wealth, but within 7 years, that number is down to 8. In the U.S., where I am from, many people believe the best way to address this issue is by implementing governmental redistribution of wealth, so as to begin closing the gap between the rich and the poor. The founders of Crowdholding hold the same concern as relates to bridging the gap between the rich and poor, but they differ on how that wealth is to be redistributed: Crowdholding is an application that seeks to increase incomes of companies and individuals without government interference.

Ethan Clime, one of the founders, states he was motivated to become an entrepreneur for the very purpose of helping poor people because of the time he spent in international development when serving as a Peace Corps volunteer in Moldova. Rarely did Ethan see international and government funding going to the people; it usually went into the pockets of the richest in their society, with the government scraping off fees for themselves. And the methods and reasons for development in Moldova were not applicable to the problems on the ground. For example, tons of money was put into helping people write resumes, but this never helped them find a job. And in Moldova, people just need jobs – any type of income – and in order to do this they usually have to move out of the country because there’s virtually nothing for them there (other than learning how to write a resume).

Complementing that experience, upon reading Peter Diamandis’ Bold, a book which examines futuristic uses of technology and its implication on the economy, Ethan started to think of the possibilities of crowdsourcing. After all, exponential technology will (and is) eliminating a lot of the ways in which people used to make money: 3D printing is on the rise, so even outsourcing manufacturing for the sake of exploiting hundreds of people on an assembly line is disappearing. So Crowdholding is meant to fill in the gap that such technological advancements are producing as regards wealth. Says Ethan: “The rise of 3D printing in America is essentially bringing manufacturing back to America. Companies are using automated manufacturing methods, and people are going to lose jobs, that’s just a simple fact. So I want to create something that assembles the masses and allows them to trade without a broker, something that allows people to make money without having a traditional ‘job.’”

Consultants are more feasible than brokers. There’s no need in the world today to take money from the people without giving anything back to them in return.

Within this vision, revenue goes back to the people. And investments go back into the company from the people when they buy the product. It’s a cyclical effect that is consistently mutually beneficial. As Ethan points out, “Capitalism is on steroids. Wall Street could do this right now if they wanted, cut out the brokers. But they do not want to do that because they make so much money from the commissions that brokers take. Consultants are more feasible than brokers, in my opinion. That’s the idea of this. There’s no need in the world today to take money from the people without giving anything back to them in return. I just don’t see how that can work in the near future; it’s already failing now.”

One of the most interesting and important aspects to this application is how businesses will be held accountable. They intend on using analytics to track sales of businesses and startups, so as to ensure that the appropriate amount of revenue (which will be increased from 1% in the future) is returned to the crowd. In this context, then, the only time a business will lie is to say they have actually made more than they actually have earned, because they want to create long-term, valued crowdshares and get outside investment. And if they do lie, stating they made more money than they actually did, this only benefits the crowd, who will receive more revenue because of it. Furthermore, in a similar fashion to Kickstarter, if businesses are found to claim that they made less money than they actually did, or to have not tried to make the project to the best of their ability, they will be kicked off the application.

Crowdholding’s development has so far entirely relied upon the support and investments of volunteers (21 volunteers, to be precise). Zero money has been spent on getting the application started. In the beginning, they were refused money from investors, but instead of giving up, they found people to recruit. These volunteers are aware they will not be paid until the success of Crowdholding is evident – and these volunteers are fine with that, because they find inspiration in the concept itself.

The test site that launches today consists of a batch of 13 different startups, ranging from social media, gaming, fashion and swimwear, to a musician and a novelist. Ethan has commented that they “are beta testing everywhere to see which industry sticks and what the public likes to choose from. It could be anyone; we feel this could work for any industry, but we want to see right now which one will stick to understand how to get it working as fast as possible.” They hope to move out of beta mode and launch the official site by September or October.

So if you are interested in getting involved in an innovative income-building concept that completely shirks off bureaucratic procedure and leeching middlemen, consider looking into one (or more) of the 13 startups looking for advice on Crowdholding starting March 17th.