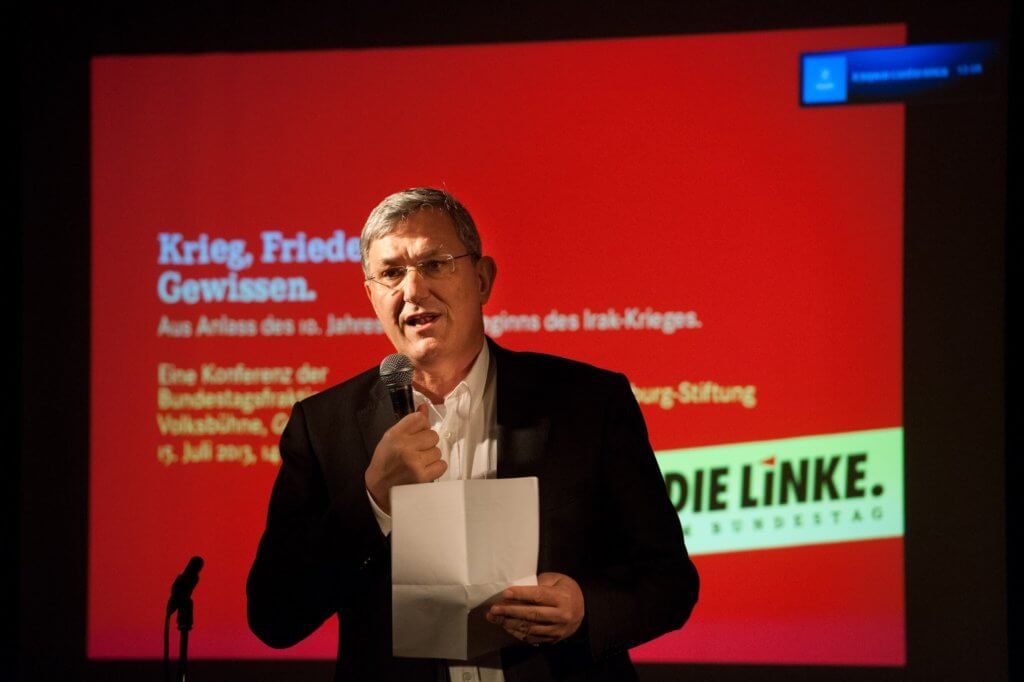 How would you situate the upcoming German elections within the political landscape of the European Union?

The German general elections are taking place in times of a deep crisis for democracy. It is – as perhaps seldom before – a landmark election for the future of our country. Policies of the German government in Europe, have had devastating consequences for Europeans. An EU dominated by Germany, exacerbates the social divide in Europe, through the ongoing austerity measures. The unilaterally oriented, economic policy of the federal government, which is strongly focused on exports, weakens the national economies of our European neighbors. This is just one of many reasons for a sustained policy change in Germany, in order to create a brand new start for Europe. The German government plays a key role in transforming the European Union into an area of competition. However, competition of location, pressure on wages and the welfare state and free trade are neither in the interest of the people in Germany nor for the rest of Europe.

All over Europe, traditional political parties are losing popularity. The French election is just one example showing that the people in Europe are voting against the political establishment. How can traditional parliamentary politics remain a driving force for a just and peaceful social change?

Social democracy in Europe is doomed to failure, if it doesn’t undergo a significant overhaul, dissociating itself from the neoliberal agenda.

Looking at Europe, it appears obvious, that the rise of right-wing populist parties is definable by the spread of uncertain working and living conditions. An additional factor is the unleashing of competition in everyday life. In Germany, uncertainty has affected the middle class for more than two decades. Many people in Germany feel a sense of paralysis – after ten years of “Tina” (There-is-no-alternative) policy, under chancellor Angela Merkel. In grand coalitions, Social Democrats and Christian Democrats resemble each other like two peas in a pod. Protest movements, such as the one addressing TTIP, are being largely ignored by the German government. Social democracy in Europe is doomed to failure, if it doesn’t undergo a significant overhaul, dissociating itself from the neoliberal agenda.

In France, Mélenchon refused to endorse Macron for the second round of the elections. He was criticized harshly by many for this. However, in the aftermath of the French elections, you have shared a tweet saying that relief was inappropriate and that voting for the lesser of evils should not be an option in European elections. Does the Left fail to adequately oppose right wing populism?

Jean-Luc Mélenchon expressed himself clearly by stating, that it would be a “terrible mistake” to vote for Marine Le Pen. He fought the Front National, and called on his supporters not to contribute a single vote to the Front National, because this would drive France into a disaster of epic proportions – with an unpredictable ending. It is completely absurd if some media outlets now set up the equation that whoever is not supporting Macron is automatically of the extreme-right. Macron’s political program will further heighten the social problems in France. The only reason to choose Macron is that he is not Le Pen.

How do Die Linke and grassroots movements work together? What is your relationship with movements such as the commons and the feminist movement?

We are an organic part of a “camp of solidarity” and stand alongside unions, social movements as well as organizations and initiatives for feminism, peace and refugees. The struggle for the preservation of the public (public services of public interest) is also our struggle. I am delighted that more and more young people are choosing to join Die Linke and get involved in politics.

You express the need for a new labor movement. What exactly needs to change, what is already happening?

It is the challenge of the Left to define and organize the common interests of workers and employees and provide employment protection.

A leftist party ought to develop policies that do not victimize citizens, and which considers itself a social voice in support of people that stand up for their rights. In neoliberalism, core workers are played off against temporary workers, precarious against long-term unemployed workers, finally precarious and unemployed with a German passport are being played off against fugitives. These different groups are driven into permanent and severe competition. Those circumstances aggravate the organization of common interests and the experience of solidarity – but these components are the basis for class consciousness. It is the challenge of the Left to define and organize the common interests of workers and employees and provide employment protection. Yet it is also important to establish that other minorities are not the problem, but the super-rich, the finance world, and social injustice.

In Germany, social justice has always been a major demand put out by Die Linke. How do you deal with the popularity of the Schulz campaign, which is now taking the lead on these topics?

If the commitments to a new social-justice and peace-policy are serious, a Red-Red-Green coalition is the only realistic option. Yet we do not know exactly what Schulz wants. As long as he does not seriously exclude forming a government with the CDU / CSU or even the FDP, his talk of social justice is not credible.

Some people in Germany seem to ask themselves if Die Linke has cut lose all its ties to former GDR political functionaries. How do you react to such criticism?

Die Linke ties in with the left-democratic positions and traditions of the socialist, social-democratic and communist workers’ movement, as well as feminist and other emancipatory movements. We bundle political experiences from the German Democratic Republic and the Federal Republic of Germany. The GDR has shown that a socialism attempt, which is not democratically shaped by the great majority of the people, but is controlled by a state and party leadership, must sooner or later fail. Without democracy, there cannot be socialism.

Under what circumstances would Die Linke be willing to form a government with SPD and the Greens?

My party is planning on co-governing at the Federal level. The prerequisite is that a change of policy is going to be implemented. Social justice must be the benchmark for the government’s activities and millions of people need to experience significant improvement in their everyday lives. In concrete terms, pensions need to be solid and life-sustaining. The Agenda 2010, implemented by a Social-Democratic government and highly destructive to social justice, needs to be withdrawn. Whoever wants to create fair conditions on the labor market must significantly increase the minimum wage and take up the fight against sprawling temporary work. Maintaining the Hartz-IV sector with its sanctions regime is not acceptable to us. We urgently need a program for public social housing and against speculation. Ultimately huge investment is needed in public services and infrastructure.

Till Gentzsch and Valentin Ihßen
Valentin Ihßen is a Berlin based freelance journalist. He studies PPE at Witten/Herdecke University and is particularly interested in the field of democratic innovations & political theory. Till Gentzsch works as a freelance journalist. He studies PPE at Witten/ Herdecke University. His main focus is on political theory.
> see other articles <