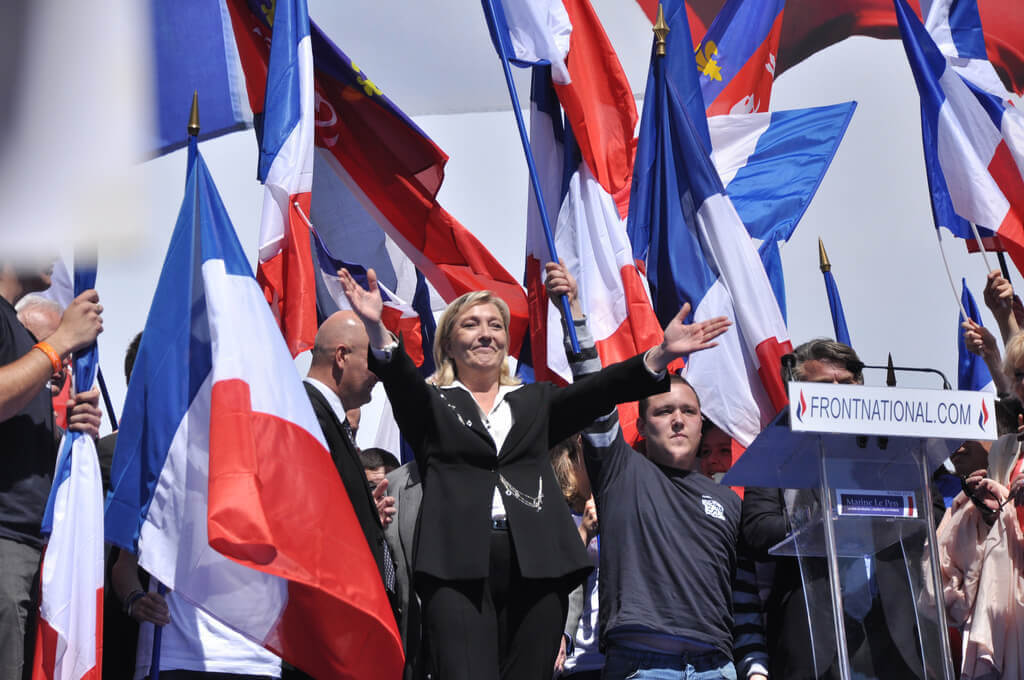 Without doubt the French election promises a political shake-up. The governing Socialist Party is at just 8% in the presidential poll while all four leading candidates vying to replace François Hollande declare themselves the challengers to ‘élites’, or even to be ‘anti-systemic’. Certainly the candidates are keen to represent a clean break with the record of both the Hollande and Sarkozy presidencies, associated with continual economic crisis as well as the insecurity attached to the mounting war on terror. Yet the ‘battle against élites’ increasingly appears as a mere marketing strategy, the supposed fight against ‘vested interests’ able to cover all manner of sins, or indeed, vested interests.

His campaign began with the slogan ‘I reject this system’, and supportive media continues to cast him as the ‘anti-system’ candidate.

For evidence of this we need look no further than the candidate currently in the lead in the opinion polls, Emmanuel Macron of En Marche! [On the Move]. French presidential candidates write books about their political vision: Macron’s is entitled Révolution. He promises a new way of doing politics, without the old party machines. If power has changed hands between parties [alternance] in recent decades, his is the only ‘true’ alternance. His campaign began with the slogan ‘I reject this system’, and supportive media continues to cast him as the ‘anti-system’ candidate. You wouldn’t have guessed that this revolutionary was Minister of the Economy in the present government until August 2016, or that while never an elected politician, he did attend the élite ENA civil service training college, before continuing his education as… an investment banker.

This ‘fresh face’ does represent something of a break with the current government; or rather, a much-accelerated version of its agenda. Though airily projecting the notion that he was uncomfortable with aspects of the Loi Travail that sparked mass labour and youth protests in spring 2016 (a Labour Act which he himself advocated at the time), Macron’s plan is in fact to extend its principles far further. Promoting the ‘rights of the individual’ (or rather, individual employer) in setting the retirement age, or bypassing France’s 35-hour working week, sounds a lot like getting rid of rights whose very nature (i.e. avoiding an all-out race to the bottom) demands that they are collective in character. The ‘anti-system’ candidate tellingly talks about France as a ‘startup’, and the startup in question seems to be Uber. His plans to exempt stocks from ISF (Solidarity Tax on Wealth) are also a peculiar ‘revolutionary’ proposal.

In this fight for renewal Macron has aligned an impressive array of factions. He is supported by most of the ministers of the centre-Right governments of the mid-2000s, under Jacques Chirac; 2014-16 Socialist prime minister Manuel Valls, and most of his ministers; centre-to-centre right liberals like François Bayrou; and almost all media, with the youthful candidate’s handsome visage dominating many a front page. He transcends the old party divides, yet rallies behind him the very same individuals of whatever party participated in the last 15 years’ worth of governments. At least François Hollande had the candour to admit that he would not announce his own support for Macron, because such a declaration ‘would be no service’ to his campaign. The En Marche! candidate could however tweet a phone call from Barack Obama wishing him good luck.

Of similarly thin ‘anti-élite’ credentials is François Fillon, former Prime Minister and candidate of the conservative party Les Republicains. Promising a sharply Thatcherite economic agenda as well as rhetorical bombast against ‘Islamic totalitarianism’, Fillon’s struggle against ‘vested interests’ particularly centres on the corruption scandals that have threatened to sink his campaign. Using state cash to hire his wife Penelope and his sons to do alleged ‘fake jobs’ – getting almost a million euros from the public purse – was not itself intended as subversive.

Fillon has switched to conspiracy-theory style attacks on the shadowy forces he claims are driving the police investigations against him.

But with key Les Republicains members and even his campaign director giving up on his candidacy, Fillon has switched to conspiracy-theory style attacks on the shadowy forces he claims are driving the police investigations against him. In this vein he baselessly accused president Hollande of forming a secret ‘cabinet noir’ in order to direct the smears, in this bold claim perhaps seeking to capture some Trumpian stardust. This bizarre narrative of the deep state setting out to destroy France’s leading conservative candidate has indeed had some success in galvanising François Fillon’s increasingly hysterical activist base, with supporters of the besieged candidate even booing representatives of their own party at Fillon’s own rallies for their perceived failure to resist the anti-Fillon coup.

Clearly in each case the idea of the strong leader standing up to vested interests is a reflection of a deep malaise in French political life. The demand for ‘change’ reflects not only discontent with the general course of recent governments but also the hollowing out of real political alternatives. The paradox is that in economic terms in particular, both Macron and Fillon offer much more of the same agenda that has dominated every government since François Mitterrand’s 1983 turn to fiscal rigour. In a context of political tumult, they however realise the potency of an ersatz ‘outsiderishness’, with Macron in particular recognising that refusing to detail his policies allows the creation of a blank screen onto which anyone can project any vision of ‘change’ they prefer – not unlike Barack Obama’s slogan ‘HOPE’.

At the same time, the candidates who represent some real political alternative are caught between fully embracing their own oppositional character, or else trying to swim toward a more respectable or ‘statesmanlike’ image. This contradiction is particularly notable in the campaign of Jean-Luc Mélenchon, whose replacement of his 2012 ‘Left Front’ candidacy with a new less structured movement named ‘France Unbowed’ reflects an attempt to break with his dependency on the Communist Party and far Left. Calling for an end to the ‘presidential monarchy’ and the creation of a Sixth Republic of more direct-democratic aspect, Mélenchon’s effectiveness is nonetheless closely tied to his own personal charisma and his evident intelligence.

Yet it should also be said that Mélenchon is not the ‘far Leftist’ his opponents claim.

Mélenchon’s reboot has had some real success, with the former Socialist senator rising from around 11% in the polls (as in 2012) to 20% in the last month, within striking range of the lead candidates. While most of this vote seems to have come from the collapse of the Socialist candidate Hamon (declining by similar proportions), Mélenchon has also made real headway among the young and working-class voters hitherto expected to rally behind Marine Le Pen. Nonetheless, even his populist turn is underpinned by a kind of idealised view of the French republican tradition, supposedly abandoned by recent governments: he thus claims the mantle of not only François Mitterrand but also Charles de Gaulle. Of the major candidates it was in fact Macron who most sharply condemned France’s colonial history (before then apologising for having done so).

In a sense, Mélenchon is cleverly positioning himself. Constantly derided by his opponents as somehow un-national (a Russian stooge, a ‘French Chávez’, or as Macron put it, potential founder of a ‘Cuba without the sunshine’) Mélenchon seeks to present policies of left-wing inspiration (protectionist economic policies, leaving NATO) as a continuation of a ‘Mitterrando-Gaullist’ tradition. Yet it should also be said that Mélenchon is not the ‘far Leftist’ his opponents claim: he does, after all, come from a long career in the distinctly unradical French Socialist Party, before being pitched to a stronger oppositional stance after the 2005 referendum campaign against the European Constitution.

Also trying to evince her own Gaullist credentials is Marine Le Pen, as part of her long campaign to ‘de-demonise’ her party and render it compatible with republican values. This has also succeeded in part thanks to her Front National party’s vice-president Florian Philippot, who has not only pushed the FN onto a more protectionist-statist economic platform but also – while certainly not promoting gay rights – espousing a particular kind of Islamophobia that presents Muslims as a homophobic and misogynist threat to Western values of tolerance (such egalitarian mores are themselves labelled ‘French republican tradition’ across party lines, despite their only recent vintage).

It is difficult to imagine many Mélenchon voters turning out to vote for Fillon, or indeed vice versa.

In a generally low-key campaign reliant on the decades-long sedimentation of support for the FN as an ‘anti-establishment’ force, Le Pen has made few decisive media sallies. The campaign has not yet moved onto the terrain of security/refugees/terrorism (in her mind the same thing) on which she could expect to thrive. The only real moment she became the centre of attention was when she claimed that French police had no complicity in the Nazi deportation of Jews (a claim that looked like a piece of red meat to fascist FN militants) before then claiming that she had meant that since De Gaulle was in London, the operatives of the collaborationist French state were not ‘really’ representatives of France.

While this line was widely deemed an unprompted gaffe, Le Pen (who almost all polls predict will reach the second round) also delivered one of the sharpest lines of the campaign by declaring the first round merely the ‘primary’ among the pro-system candidates, who will face her. Yet if there is a ‘republican bloc’ against Le Pen in the second round, its size and composition depends radically on who the opponent is: it is difficult to imagine many Mélenchon voters turning out to vote for Fillon, or indeed vice versa. Indeed, if defensive ‘anti-fascism’ is a short-term measure to block the FN, claims of that party’s illegitimacy have proven unsuccessful in stemming the party’s rise, now expected to secure over 40% in the second round.

In actually implementing FN policies a Le Pen regime would seemingly have to rely on some sort of deal with conservatives (the government being distinct from the presidency). This is also true of Macron, whose new En Marche! vehicle seems highly unlikely to sweep June’s legislative elections. A government loyal to his presidency would likely have to rely on some sort of coalition with right-wing Socialists and elements of the centre and centre-Right. Inveighing against ‘the caste’, Mélenchon’s most radical proposal does however offer a real break with this: calling a Constituent Assembly in which no former MP of the Fifth Republic could serve.