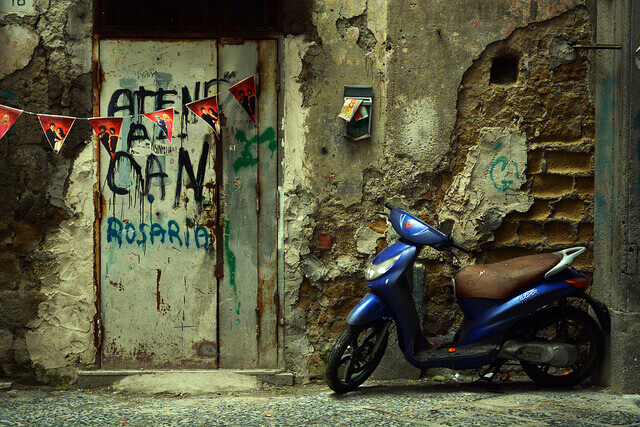 Behind any “rebel city” there is an active structure of social movements, civil organizations and citizens claiming their right to own their city’s future. Cities that become spaces of radical innovation and democratic regeneration when citizens get tired of useless and corrupt bureaucratic processes for regeneration. Cities like Barcelona, where the leader of the radical municipal anti-eviction platform won the city elections last year; or Messina, the Sicilian city whose mayor, Renato Accorinti, has been working towards a more participatory and democratic political structure for nearly four years.

Naples is one of these examples: in the Southern Italian city more than 20 buildings are occupied and used for a wide variety of political, social and cultural events that try to achieve better conditions for citizens. The re-elected independent mayor of the city Luigi de Magistris, has been actively engaged in the process of establishing an active network of cities with alternative governments able to speak on behalf of the people.

At a moment in which European and national institutions are losing the support of citizens, the core idea of ‘the cities of change’ is to reject market logic as the only rule establishing order in political structures: instead, cities of change put citizens at the centre of the decision-making process. Governments defend citizen participation in political institutions that protect and strengthen the commons. Naples was the first Italian city to establish a “Department of the Commons” and the first to change the municipal statute by inserting the “commons” as one of the interests to be protected and recognised as a fundamental right.

Citizens and social movements transformed these spaces into places “that create social capital in terms of collective uses with a commons value.”

The city of Naples recognised seven public properties occupied by citizens and associations as “emerging commons and environments of civic development” through a Council Resolution in 2016. All these buildings were public properties, which had for years been in a terrible state of neglect and decay. Citizens and social movements transformed these spaces into places “that create social capital in terms of collective uses with a commons value.” The seven properties identified by the Resolution are very different in terms of origin and historical evolution, but they share the fact that Neapolitans were worried about speculation and the possible privatisation of the buildings. This concern drove them to take the decision to act first and restore them to the public interest.

The municipalist government of De Magistris has allowed social organisations to continue developing processes of cultural creation and productive innovation: Government Resolution no. 446/2016 has as its objective “the identification of areas of civic importance ascribed to the category of the commons.” Immediately after its publication (the resolution is dated 1 June  2016 but was only publicised recently), some members of the City Council criticised the Neapolitan Government, because according to them it would be better for the city to sell or rent these public spaces to increase the city’s income. The Government was also accused of “legalising” an illegal occupation of public buildings. However, Resolution 446/2016 does not provide leases or concessions for the social movements that occupy the spaces; it only acknowledges the  “civic use” they do with them.

What has not been outlined is who has the official responsibility for maintaining the spaces (regular checks, cleaning etc), and so it is unclear if this is the Government’s responsibility, the occupants’ or both. The Resolution specifies that “the person temporarily in custody of the property management of municipal assets identified as a “common good” will have to respond to the principles of good performance, impartiality, cost management, and resource efficiency, respecting the public interest.”

WHAT MAKES A PUBLIC BUILDING A “COMMON GOOD” IN NAPLES?

Resolution 446/2016 is important because it recognises the social value of the experience of living in occupied spaces and not only the economic value of the properties.

The Neapolitan Administration defines common goods as “the tangible and intangible assets of collective belonging that are managed in a shared, participatory process and which is committed to ensuring the collective enjoyment of common goods and their preservation for the benefit of future generations.” The administration has also created a “Permanent Citizen Observatory on the Commons” which studies, analyses, proposes and controls the management and protection of common goods. The Observatory has eleven members, all of whom are experts in legal, economic, social or environmental fields. Seven of these members are appointed by the Mayor and four are citizens selected through simple online procedures.

Following the spirit of the cities of change, Resolution 446/2016 is important because it recognises the social value of the experience of living in occupied spaces  and not only the economic value of the properties. It is also important because it establishes “the recognition of public spaces as part of a process of constant active listening and monitoring of the city and its demands, in relation to the collective use of spaces and protection of the commons.”

In order to analyse the forms of management and regulation of the occupied buildings, there are public discussion tables where citizens share decision making power with the Administration. Each space is different so the required management and the profile of the spaces varies from one to another. At the same time they are united through a commitment to the protection of the commons with the objective of keeping cultural, social and political issues alive, for example in the form of workshops and training centres for women, children and unemployed citizens.

Naples is just one of the hundreds of cases of new municipalism that are spreading around Europe. There are more and more examples of cities working on testing new citizenship initiatives and possible relationships with local institutions, looking for creative responses to the challenges of urban development, social harmony, and integration of migrants. What is needed beyond this is to deepen transnational cooperation between these experiments, to facilitate the exchange of knowledge in order to deal more effectively with the problems that nation-states seem unable to solve.

Marta Cillero
Marta Cillero is responsible of EA communications. Graduated in Media Studies, Journalism and Communication. Background in Gender Studies, previously she interned with Anushay Hossain as community manager and research assistant . For two years she has monthly reported for United Explanations and other Spanish blogs. She has volunteer for many years with different NGOs and she has experience assisting in Data Journalism Research Projects. Email her at [email protected]
> see other articles <