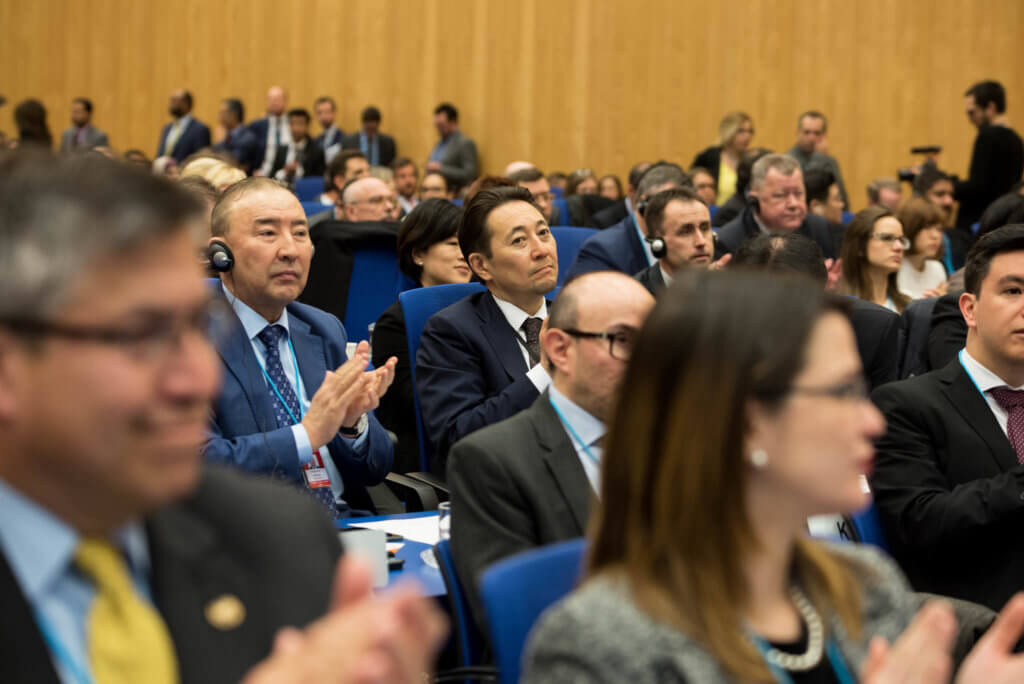 Representatives from more than 60 UN member states arrived to Vienna to discuss drug policy. Like in past years, officers of health ministries, foreign ministries, and other institutions shaping the world’s drug policy filled up the futuristic Vienna International Centre for the duration of the UN Committee on Narcotic Drugs (CND). The session, which took place over the course of several days, consisted of intense meetings organized by representatives of civil society.

We object to capital punishment and fully support in the EU’s stance on drugs.

“For us, the Vienna meeting is a chance to talk about the challenges facing Poland’s drug policy. It’s here that we learn solutions to issues others have already tackled,” said Agata Kwiatkowska, a representative from Polish Foundation for Social Policy Prekursor. “We didn’t come here to cozy up to delegates. We want to influence international drug law, social security, and healthcare so as to secure the needs of drug users in our country.”

The addresses delivered at the plenary hall were accompanied by nearly one hundred events on specific drug-related problems. Delegates from the Russian Federation rhapsodized about repressive therapies, including compulsory drug tests for teenagers, whereas Washington and Ottawa posed questions on how to reconcile the legalization of marijuana with the UN’s conservative drug conventions.

This year’s 60th session of the UN Commission on Narcotic Drugs saw a wide range of opinions on drug policies. For example, as regards the Philippines, officials representing President Rodrigo Duterte defended his unprecedented methods for the war on drugs (Duterte is responsible for the systematic slaughter of drug users in his country), while representatives from Uruguay and Canada deliberated over the exact quotas of marijuana bushes allowed in a household.

In this polarized milieu, the Polish delegation also took its stance. One address made by the director of the National Bureau for Drug Prevention (Krajowe Biuro ds. Przeciwdziałania Narkomanii, KBPN), Piotr Jabłoński counts among those that staunchly embrace an evidence-based drug policy that respects human rights. Mounting the podium the first day of the CND session, he opened his speech by clearly stating that Poland’s approach to drugs is in synch with the European Union’s approach: “We particularly wish to emphasize our general objection to the use of capital punishment also with reference to drug-related crime. We would like to point to the necessity of shaping the response to drugs based on the concept of public health and the necessity of including in the drug policy the needs of drug-dependent individuals through promoting and providing access to harm reduction programmes and in the context of penal policy through the use of punishments proportionally to the crimes committed.”

The drug policy should be more sensitive to the voices of individuals and groups of specific needs such as women, youth, minorities, marginalized groups and individuals of limited to cultural and material goods.

Jabłoński emphasized that drug addiction is a challenge, and should first be addressed by healthcare systems. “We aim to seek effective solutions to the problem of addiction in the health policy, concept of public health, education, access to prevention, reduction of risk factors and respect for universal rights and standards as well as development of self-awareness and responsibility of drug users. Consequently, the drug policy should be more sensitive to the voices of individuals and groups of specific needs such as women, youth, minorities, marginalized groups and individuals of limited to cultural and material goods. In the development and assessment of such actions the voice of civil society should be given priority. They are the people and institutions who are often the closest to the individuals battling with addictions.”

An important part of Jabłoński’s address was his recognition of the role members of NGOs perform as concerns reform of international drug policy. “In the development and assessment of such actions the voice of civil society should be given priority,” said Jabłoński. “They are the people and institutions who are often the closest to the individuals battling with addictions.”

His speech, lasting several minutes, also addressed the international situation, with Jabłoński asserting that “Undeniably, domestic funds should be increased; however, the process of phasing out the international funds should be conducted with great care in order to eliminate the risk of sudden lack of financial resources to sponsor prevention or treatment programmes.”

The 60th session of the UN Commission on Narcotic Drugs commenced on Friday, March 17.

Translated from Polish by Mikołaj Denderski.