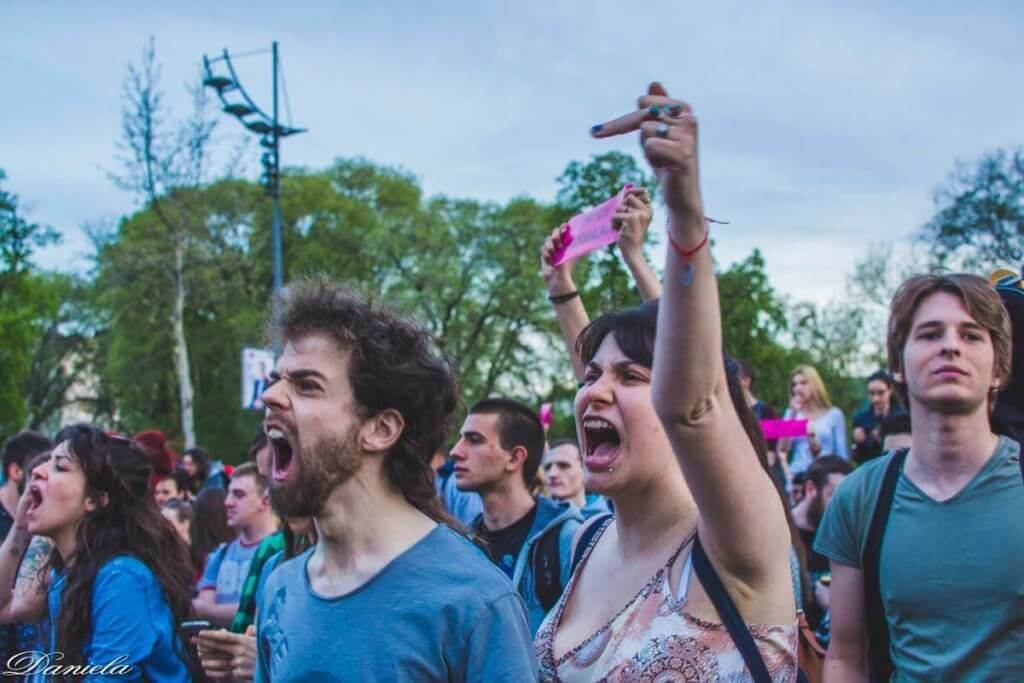 CITIZENS’ DECLARATION IN THE PROSTEST AGAINST DICTATORSHIP (TRANSLATION)

After an announcement which included demands formulated by a number of towns and cities from Serbia and the diaspora, and which had already been made public as demands proclaimed by the people of Novi Sad, a larger connection between the cities and the people who took part in the protests emerged. As one could already assume, the protests have arisen spontaneously in the wake of mass discontent of the people, both home and abroad, over the entire electoral process and presidential campaign on the eve of the April 2nd elections in Serbia.

For seven days have we already walked along the streets in protest. Autocracy, farcical presidential elections, continuous lack of perspective and the humiliation that we have suffered by the government and its institutions, and finally, a complete disregard towards the difficult lives that most of us are forced to live – these are the reasons that have brought us together to protest.

Furthermore, the reasons that have brought us together are fake university degrees of the people in power, their false promises, false news, false elections. For more than two decades we have been waiting for these promises to be fulfilled. For some of us, that has been an entire life so far. Today we say that we do not accept mindlessness and autocracy, by standing together despite our different opinions and different age. The answer to the question “Who organized the protests?”, can be found every day among ourselves, who, each in our own way, express our discontent with a banner, a message, with drums or with cooking pots, live feeds or sharing on social media: the organizers are the people.

We, the students, together with workers, pupils, farmers, peasants, retired people and all those dissatisfied in Serbia who have been protesting in the streets for days, we would like to proclaim our demands and invite all of those who agree with them to join us in struggle for their achievement!

We want to make it clear that we share the same sentiment towards all the current actors on our political scene, hence we do not support neither the ruling party nor those who present themselves as its opposition. We need no leaders in this struggle! Students are not the only social group in the streets of Serbia. Therefore, we call upon everyone, from trade unions to degraded individuals, to participate. We are not asking for anything that has not already been promised to us so many times, however, it is obvious that the promises they made can be fulfilled by us alone and no one else, once we get together.

Taken all this into account, we are highlighting the demands which reflect everything that has been happening in the streets throughout Serbia for the past week. We will not give up on these demands and we will struggle for their achievement until the very end!

On account of everything that you have been talking about for the past days, these are the requests which received the most amount of support:

1) ABOLITION OF DICTATORSHIP AND THE COMPLETE REMOVAL OF THE POLITICAL ELITE ALONG WITH THEIR LEADER ALEKSANDAR VUČIĆ, FOLLOWED BY:

-FAIR AND FREE ELECTIONS – The main prerequisite for the prevention of an absolutist government in Serbia are fair votes. Our demands: an immediate recount of the ballots, the dismissal of the current Regulatory Electoral Commission and Regulatory Body for Electronic Media members, making sure all candidates receive equal media attention, a strict sanctioning of bought votes and blackmailed voters, introducing an obligatory TV debate and public financing of political campaigns. We implore that this also be the case for these presidential elections, thus we request an independent verification of their validity and a criminal liability to all involved, not just for the irregular campaigns, but also for the irregularities during voting and counting of the votes.

-DEPARTIZATION – An immediate elimination of all corrupt party officials in public sector enterprises.

-DECENTRALIZATION –Shifting the political power across the country – a larger amount of people making important decisions for our society; direct election of local officials.

2. A SHIFT IN PRIORITIES REGARDING ECONOMICAL AND SOCIAL POLITICS, FOLLOWED BY:

-PROTECTION OF THE RIGHTS OF WORKERS AND IMPROVING THEIR STATUS

-PROTECTION OF THE RIGHTS OF WORKERS AND IMPROVING THEIR STATUS – The immediate abolition of changes made to the Labor law in an effort to quickly improve the situation of our workers, ensuring their respectful rights as well as immediately raising the minimum wage. Illegal, seasonal, temporary and occasional workers, as well as the regular working class’ protection will be fought for by any means necessary.

-PROTECTION OF THE LIVING STANDARDS OF CITIZENS – Abolishment of the illegal reductions in pensions and wages, reform and improvement of the system of social benefits, agrarian reform and increased subsidies of rural households, a revision of the arrangements made with the IMF and a halt on further privatization of public enterprises.

STATEMENT BY THE STUDENT MOVEMENT OF NOVI SAD ON THE UNFOLDING EVENTS:

The protests have started on Monday the 3rd of April, a day after the presidential elections in Serbia and initially started in Belgrade and Novi Sad, initiated mostly by Serbia’s youth and student populations. They are protesting against the ‘dictatorship’ of the ex-prime minister and now president Aleksandar Vučić, over the election irregularities and over social and economic issues such as unemployment and austerity measures which have plagued the country in recent years. Only one day after the initial protests, a wave of mass demonstrations ensued, ranging across over 20 towns and cities in Serbia and refusing to dwindle in number. Four days after, the current president of the National Assembly of Serbia, Maja Gojković, decided to halt the operation of the Assembly up until the end of the protests which, since then, have appeared to be gaining momentum. On the 8th of April the student protesters were joined by the Military and Police Unions which have organized their own demonstrations in front of the Assembly building in Belgrade. The students across different towns then went on to harmonize their demands, producing a document (translated above) which was read in over 20 towns and cities as a set of generally agreed demands to the government. Other demands are being set up at local levels. Currently, the students are seeking ways by which to expand the already numerous protests by cooperating with different trade unions and other worker’s and civil society organizations in what appears to be a coordinated effort at focusing public rage over the presidential elections to more urgent social and economic issues which have plagued the country for over a decade. These include both political and economic demands such as the dismissal of the entire ruling coalition, freedom of the press, the dismissal of all public sector functions held by any party members. Also, the protests’ economic demands point out not only to the country’s internal problems but those induced in its international relations: a call to end austerity policy, a revision of arrangements made with the IMF and a call for the protection from further living standard deterioration. While the regime has attempted to both sideline the protests through media control, police inaction and infiltration, and use them as an excuse for new parliamentary elections (benefiting the ruling coalition), the protests themselves have been supported by different actors across the political spectrum. These include oppositional presidential candidates, trade unions and factory workers, pensioner’s unions, news agencies, as well as actors and other public personas, signaling the possibility of further escalation of mass discontent over the current political situation.

We call for international attention and solidarity with the protest movements in Serbia and call upon the international media to publicize our efforts to counter the social and economic disasters that have been induced by austerity measures and anti-democratic government currently in power. For more information on the developing situation, please contact us directly via the e-mail provided here ([email protected]).

The list of demands is a collectively produced document that has no single author.

The explanation given below was produced by the Student Movement of Novi Sad, one of the initiators of the protests.