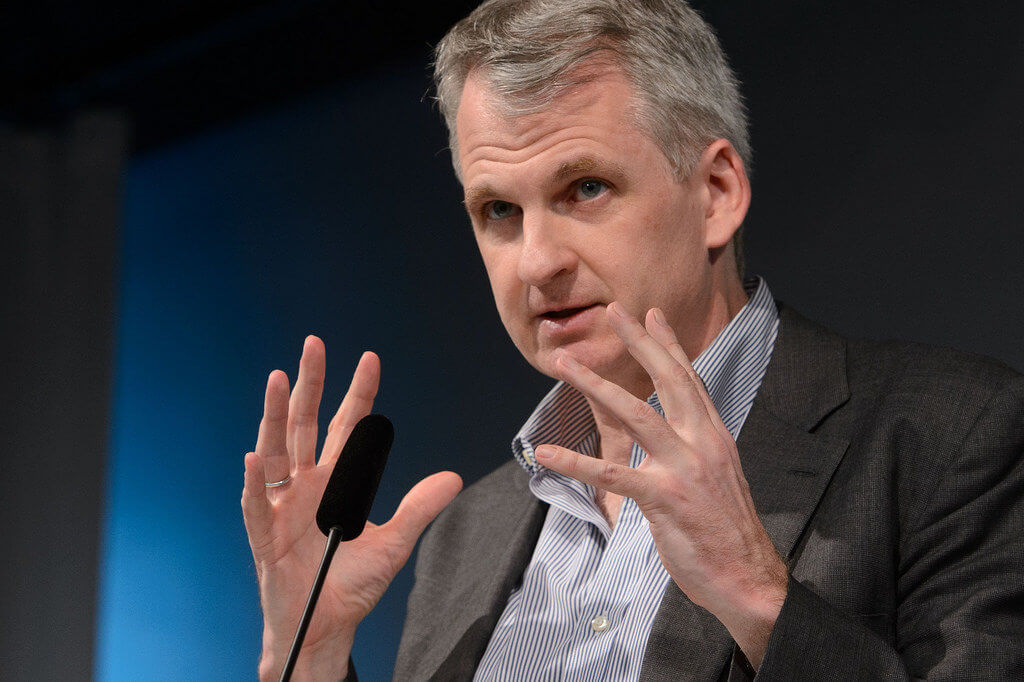 A historian, philosopher and author specializing in Eastern Europe and the Holocaust.

“It’s really just one idea about history and politics: the idea that history has to be political. If I get this idea across, I’ll try to give you a sense of how the knowledge of 20th century might just be useful for the century we will be confronting,” says Snyder, stressing that we have forgotten some very simple, obvious-sounding things. Understanding the past, he continues, is not just about knowing that things happened but also realizing that these things were possible – and so were other things that might have happened. This perspective becomes very useful when confronted with statements like “It has to be this way”, leading to a healthy suspicion towards any kind of monism or determinism.

According to Snyder, it is the lack of historical perspective that leads to what he calls the politics of inevitability. This paradigm has been especially influential in the United States in the last twenty-five years. It’s based around confident predictions of where things are going and is best summarised as “it’s all going to sort itself out into liberal democracy one way or the other”. History ends and all that’s left is liberal democracy; we have no other ideas, therefore history has to be moving into liberal democracy. It feels like history, looks like history, smart people defend it as history, but it just replaces one teleology with another. Following the collapse of the USSR, people talked about how communist ideology – the communist story – turned out not to be true, but all they did was just replace it with another story.

“Saying that one teleology is wrong and therefore another must be right is a mistake. It’s not historical thinking,” states Snyder. If you think you know where history is going, you don’t need to know anything about the past because you can just work the few things you do know into the story you’re writing.

You have conviction, so you don’t need possibility.

Another ahistorical way of viewing politics is political boredom. In a two-party system, explains Snyder, one party inevitably ends up representing the status quo while the other one becomes a vessel for rebellious ideas that are never really articulated (but they don’t need to be); there is no alternative and politics becomes boring. We call it neo-liberalism but that word loses its meaning because it embraces everything.

“Neo-liberalism is a word of critique that doesn’t contain any critique because it fails to offer any alternative. And it’s not the only one – we talk of irony, of disruption, all limited because they operate under the assumption the system will always bounce back. But what if there isn’t a system that would bounce back? That is where we are now, with a disruptor-in-chief in the White House,” the historian claims. The system is very vulnerable to shocks: people cannot interpret the events that do not fit into the story, like 9/11. “And with a shock like this, people will say: everything is new. And from that it is very close to everything is permitted. And what comes next?”

The risk lies in shifting from politics of inevitability to politics of eternity, referring to the past without any rhyme or reasons using words like “memory” and evoking nostalgia for things that never happened. If Russia builds a monument to Prince Vladimir in Moscow (where he never lived since Moscow didn’t exist in his lifetime) or when Poland, France or Britain imagine an inter-war period where there was a nation-state that never was (having been commonwealths or empires), they are being nostalgic for lies.

This way of thinking replaces interpretation with regularity – things always happened this way so there is no need to explain.

The same things happen over and over:  we are always attacked from the West (or East), there are always too many immigrants. “It’s a pattern where no one has any responsibility. It’s very hard to think about leadership in this kind of world and it is this kind of world where the notion of a Leader who comes from outside of history and becomes a saviour of the nation flourishes.”

Snyder believes America is currently shifting from one ahistorical perspective to the other: from inevitability to eternity, with lack of alternative making the shift possible. Historical awareness and thinking are becoming more important than ever.

“We think our globalization is special, new, but there is nothing too special about it. I think it’s the second one after the one in 1870s – and it was very similar: world trade, multilingualism, importing culture and writing, sharing technology, a self-conscious sense that globalization was happening and same predictions about what would it bring: a spread of liberalism and peace. It failed.”

That does not mean it has to fail again, reassures Snyder. It just means that we have survived its failure before. People were pretty confident about liberalism until the 1900s, then it went away and become worse but that doesn’t mean it’s doomed. “If you see everyone being shaky about the rules that govern things, sure, they could go away, it’s happened, but it is nothing unprecedented.”

According to Snyder, it is the reactions that we should be concerned about: ahistorical perspectives like fascism, and its ultimate expression, national socialism, that claims there is no history, only racial imperatives. But even when we say “fascists”, we usually mean “evil irrational mad people” and we forget why these things were attractive. And the reason for this was that the first globalization really did bring massive inequality. “Fascism promises that we are going to protect you from the global economy; it is a reaction to inequality that mattered a lot during the first globalization – as it does in ours.”

It becomes even more apparent when we look at the rise of the one-party state. It is a concept that allows for a gradual transition from a normal political system with a constitution to a regime that is much less normal. And because it happens gradually, people can get used to living in it every step of the way.

Another indicator is the de-monopolization of violence: armed groups that are supported by state but are not an accountable part of the state, i.e. the SA and SS.  And finally the politics of emergency: the Reichstag fire. “It creates new legitimacy for authorities because of the emergency. Who set the Reichstag fire? We don’t know. But it doesn’t matter – what is going to matter is how people react: nothing like this has ever happened before! Even though it happens with a regularity…”

If you react historically, Snyder continues, there are possibilities for manipulation. “Every authoritarian regime in history talks about extremism and terrorism all the time – but what is that? Is there an actual extremist doctrine? What does the word mean? I consider myself an extremist when it comes to defending the things I care about, because I feel strongly about them. I hope you are extremists about something too.” Eventually the word just ends up meaning what is not mainstream – and mainstream changes from day to day.

Another facet is personification: what leaders do – and Hitler did this in particular– is give the enemy a face. It’s not a set of impersonal forces, not a challenge, not a difficulty, it’s the Jews. And then you globalize them: a Jew is not your neighbour, not a citizen; he’s a member the Weltjudentum. He’s not a human anymore.

According to Snyder, the history of Eastern Europe teaches its own lessons too. One is the importance of language: when opposing communism, the first step was to think up a different set of words from the one used by the regime. Another was the concern with factuality.

“When faced with the politics of inevitability or eternity, what you do is to try to rescue the individual fact from the big story.”

And the third step was to watch out for conformism. Freedom feels awkward; self-censorship and obeying in advance are safe. “It is normal to be creative – but not to be creative for obedience. If you censor yourself in anticipation of what can and cannot be said, you are doing the power’s work for it.”

Finally, the way to fight authoritarianism depends on civil society. “The easiest way to rule is when there is just government and isolated, atomized people. If you have people doing things together that are neither for or against government, it creates connections, professional ethics and, primarily, trust. Authoritarianism is really easy when nobody trusts anybody, because resistance becomes impossible then.” The way communism ended was people trusting one not just through civil societies but also across countries.

The transition American politics is going through was similarly foreshadowed. “We take a look at what happened in Ukraine, Russia, and we say the transition failed, therefore it’s irrelevant. But we still think the people act rationally, are concerned with economic growth – but then there would be no invasions, no wars. We still think history will come to the rescue… But it never does.” Russia, Hungary and Poland then are not failed transitions, they are states ruled by intelligent men that work by different rules. And those rules are spreading westwards.

“Think of yourself as an oligarch,” he continues. “You just want your son to become unbelievably wealthy and it’s not like you dislike democracy but it’s in the way – and it’s not like you love Russia but they can help you out in this direction. That’s Yanukovych. Oh, and let’s say your political advisor is Paul Manafort. The resemblances just go on and on – we have become very Ukrainian.”