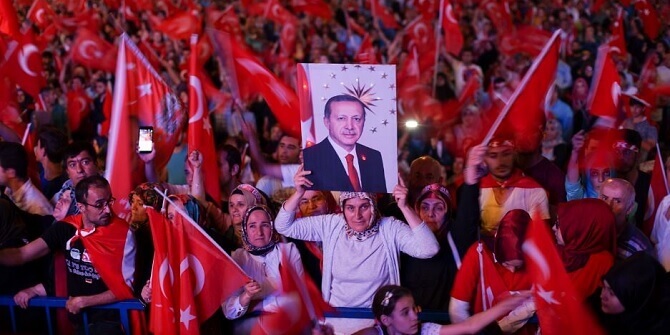 Those who followed Turkey’s tense constitutional referendum are looking high and low to find the silver lining. Unfortunately, there is none. Yes, President Erdoğan would have loved to carry the day with a much wider margin than 51.35 percent. The victory of the “No” vote in 17 out of 30 big urban centers, including Ankara and Istanbul where his own political career took off when he won the mayoral elections in 1994, must have hurt. But win he did and frankly, there is nothing to stop him now. Turkey has formalized the one-man political system that has been in the making for a good part of the 2010s.

The notion that Erdoğan cannot simply go against the wishes of half of Turkey’s citizens does not hold. After all, he has been governing as a de facto imperial president, stretching and on occasion overstepping his constitutional prerogatives, after winning the elections in August 2014 with 5 million less votes than he won in this referendum. Passing the 50 percent +1 goalpost (in the first round) has been sufficient for Erdoğan to invoke the “national will” and brand everyone critical of his rule as “traitor”. That is just how he is: he thrives on polarization – whether it is the conservative Anatolian masses against the established elites or the Turkish nation fighting back at its external enemies and the fifth columnists at home. Expect even more of that in the days ahead. We will not be getting a different, more sympathetic version. Nor will he be softened by what pundits style a “Pyrrhic victory”.

One should be aware that this referendum is not the end of the journey. The constitutional changes transferring all executive power into the hands of the president, abolishing the prime minister’s office and subduing parliament to the national leader, will come into force only after the next elections for the head of state, which will take place in the middle of 2019. Erdoğan will have to be returned to office by the voters. The likelihood of such an outcome is quite high. The 50 percent who oppose the current president are not a homogenous group and it would be a surprise if a candidate emerges who is capable of mounting a credible challenge.

Unless the mother of all economic crises strikes or for whatever reason Erdoğan chooses not to run, we can safely assume he will be running the show throughout the 2020s.

Sure enough, what the “No” camp achieved is nothing short of impressive. The odds were stacked against them. Despite Erdoğan’s near-complete stranglehold over the state machine and the media, the imprisonment of opposition leaders, and widely reported irregularities on the day of the referendum, they had huge success. At the same time, the governing AKP and the Nationalist Action Party (MHP) campaigning for “Yes” undershot their mark. Together they garnered only 25.2 million votes, 4 million less than their combined result in the general elections of November 2015. But unless the mother of all economic crises strikes (who knows?) or for whatever reason Erdoğan chooses not to run (I won’t put my money on it), we can safely assume he will be running the show throughout the 2020s.

What we will see next is the bankruptcy of the promise that superpresidentialism will bring stability for Turkey. That is not going to happen. Turkish society remains fragmented. The referendum opened rifts within the Islamist community as well as among the MHP-voting nationalists, with the party heading for an internal bloodbath at its next congress. The Republican People’s Party (CHP) is challenging the results before the courts given the controversial decision by the Supreme Electoral Council to tally votes that had not been stamped and had to be invalidated by law. I would be surprised if the CHP succeeds in overturning the referendum but, in truth, there is no way its supporters would ever recognize the legality of the constitutional changes.

Erdoğan has no other choice but to resort to repression, perhaps brute force, to deal with dissent. One of the first decisions made after the referendum was to extend the state of emergency, in force since July 2015, for another three months. The very fact that constitutional changes were adopted and then put to a plebiscite during a state of emergency is revealing.

Across the border, Syria remains a mess and there is no end in sight.

Worse still, there is a low-intensity war still going on in the southeast provinces. Erdoğan cannot win it, neither can the PKK. As things stand, it is bound to drag on for at least another generation and it is now fought in the big cities of western Turkey too. Across the border, Syria remains a mess and there is no end in sight. The “Euphrates Shield” operation is now officially over, but the Turkish military will be invading again in the future, to “mow the grass” and keep the Kurds at bay. Jihadis will continue to wreak havoc in Turkey. The strong president is meant to do away with the bad memories of the 1990s when the country was run by fractious coalition cabinets. Ironically, the PKK insurgency and Turkey’s exposure to the Middle East mark a sort of return to the turbulent 1990s.

The first two terms of the AKP in power (2002-2011) constituted a time of hope. Now, it is fear and loathing that prevail. The bitter legacy of 16 April will haunt Turkey. May Allah be with all its people.

This piece was originally published on blogs.lse.ac.uk/europpblog/

Dimitar Bechev
Dimitar Bechev is a Nonresident Senior Fellow at the Atlantic Council’s Eurasia Center and a research fellow at the Center for Slavic, Eurasian, and East European Studies, University of North Carolina—Chapel Hill. He was formerly a Visiting Fellow at LSEE Research on South Eastern Europe (LSE European Institute) and Director of the Sofia Office at the European Council on Foreign Relations (ECFR) where he covered Turkey and the Western Balkans.
> see other articles <