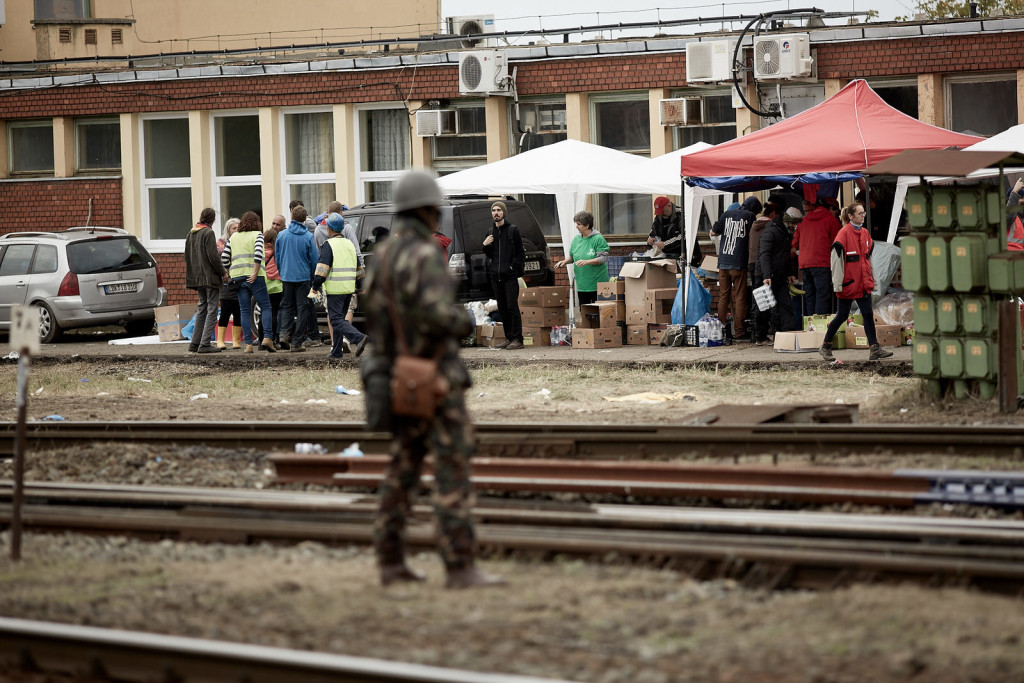 This summer the ethnic clashes between Roma and Bulgarian people in the village of Garmen and in the Orlandovtsi district in the capital of Sofia stirred up the embers of the everlasting fire of ethnic tension in Bulgaria. The Orlandovtsi and Garmen riots are the last in a long line of local conflicts of this type that come up once in a while, showing that Bulgarian authorities can only reach temporary solutions. Or they can wait for another huge issue like the migrant wave from Africa and the Middle East to become the next big thing on the public agenda. It is certain that another occasion for ethnic tensions will appear soon enough and a firm sign for that is a certain way of speaking – or perhaps we can say yelling – that comes across strongly out of newspaper pages, radio, television and computer screens.

“Roma people trashed a new asphalt-paved street”; “Gypsies beat up an exhausted horse with chains”’; “Roma people are hiring blonde Bulgarian girls so they can teach them to steal”; “The city of Haskovo gave away common land to illegal Roma”; “The city of Asenovgrad refused to compensate the Bachkovo monastery for church territories looted by Roma people”. Those are headlines and leads in journalistic texts which can be found in two of the most popular online news sources in Bulgaria and on the websites of two of the public media outlets. None of those are connected to Garmen or Orlandovtsi. This is standard news from respected sources in Bulgaria, year 2015. The other common thing between them – the authors and editors who published them openly declared that they will abide by certain ethical rules in media coverage, which do not allow for the above mentioned speech.

At this time, the news feed, filled with dubious qualifications does not stop. Texts like “Has the President ever seen a gypsy?” and “Who is the gypsy who is going to apologize?” by media mummies like Kevork Kevorkian, published in Blitz.bg, are competing in provoking hatred with racist public statements by MPs and ministers.

Three of the cited sources, OFFNews, Bulgarian National Radio, and Bulgarian National Television have signed the Ethical Code of the Bulgarian media, established in 2004. Its section on “Discrimination” states “As we are respectful to the right of every person to live in a secure environment, we will not publish materials which provoke and encourage hate, violence and any form of discrimination;  We will not state the racial, religious or ethnic identity, sexual orientation, mind or physical state of a person, if those are not of a key sense for the meaning of the information”.

The other cited source is Blitz.bg. Its authors have signed and should abide by the Professional-Ethical Code of the Bulgarian Media Union, established in 2013. In it we can also find certain postulates: “The media are obliged to respect the right of every person to live in a secure environment as they are committed not to publish any materials which provoke hate, violence and/or any form of discrimination. Therefore the media are to avoid publishing details regarding the race, color of the skin, religious identity, the sex or the sexual orientation, or any physical or mental differences or sicknesses, if those are not of a key sense to the meaning of the information” By chance or not, in this document the word “ethnic” is missing.

“The intention of the Ethical Code of 2004 is to cover all cases of publications which can hurt a person’s rights. The articles in the “Discrimination” section must restrict the provoking of hate or discrimination,” explains Alexander Kashamov, who since the beginning of this year is in charge of the Commission for Journalism Ethics in the NGO National Council for Journalism Ethics.  The foundation and the commission accept the first Ethical Code as a fundamental document for establishing standards in journalism, strengthening the freedom of speech and other wonderful chimeras which are in the credo of the organization.

In the news about Garmen or Orlandovtsi there is now way to avoid speaking about “Roma”, because the ethnic conflict is of “key sense” to the information. In a similar way, it is not ethical or right  to censor the Minister of the Interior or another politician who is speaking of the “Roma” or “Gypsy” problem. The conflict itself legitimizes the ethnic identification. “It is the same as when reporting a sexual crime of pedophilic character, you can’t and must not avoid the sexual orientation of the attacker,” Kashamov adds.

“But not rarely it is something else we see,” he continues. “We can see finger-pointing of no key sense, without any concern to the balanced presentation of information, which leads to strengthening of existing prejudice against ethnic, sexual, religious or other groups.”

On the 8 April of this year, we could read: “The exporters of lumber are not giving up, they want a meeting with [Prime-minister] Boyko Borissov”. This is the headline of a report by Ivailo Anev of OFFNews about a branch protest in front ot the main National Assembly building in Sofia. The lead states “Around a hundred Roma people, representatives of the lumber-exporting industry, went out for a fourth consecutive day of protest in front of the Parliament against the moratorium imposed on them regarding the export of unprocessed wood.” This media outlet has signed the Ethical Code. If we follow the logic of the lead in this case, the people in question are most importantly Roma and only then industry representatives, protesters or anything else. The need for and meaning of the ethnic identification in this particular case is of the same importance as would be identifying the protesters with their preferred brand of trainers. With the small difference that the first type of identification deepens hate issues that lead to violence and open confrontation.

His opinion and editorial principles explain the headline on his site:  “Gypsies beat up an exhausted horse with chains”. Let’s try to pin it down. If we follow well enough Yonchev’s words, if a certain media outlet finds it in unison with the public opinion that beating up horses and people, stealing brides, electricity or other people’s belongings, or any other vices, are typical for Roma people, then the ethnic identification becomes of “key sense”.

Acording to Pavel Antonov, managing editor of “Evromegdan”, a huge portion of the ethical norms in the journalistic field are unwritten and are a direct mirror of the writing person’s code of values. “Journalists and editors are responsible for their professional and personal choices,” according to Antonov, who is an author of a dissertation on journalist ethics in Bulgaria. “It is expected from the journalist profession and the media as a whole to defend the public interest and carry out public control of the political and economic mechanisms of authority. When the opposite happens there are self-regulating and also legal mechanisms that must defend the democratic constitutional order,” Antonov insists.

“The Ethics Code is not a legal act, but a critical text which sets some rules of behavior. In this sense it can’t be read as a strict law and an instrument of censorship or repression,” states Kashamov. In his words, this year only there is a huge amount of litigations which were received and processed by the Commission of Journalism Ethics that he is in charge of. Some of the media outlets accused of discrimination have signed the Ethics Code.

The Ethics Code of the Bulgarian media is considered “a document of legal stature” in the Law for radio and television. Ergo, its rules must be considered by all of the electronic media, regardless if they have signed the document or not. This is supposed to limit the creation of radio and television reports or other genre materials which can provoke hatred and discrimination.

On the other hand, printed and online news sources remain a no man’s land. The Commission can only send out warning appeals to the editorial rooms or in the worst case – hold the blamed media to public execration.

In the Professional-Ethical Code of the Bulgarian Media Union you can’t find the word “ethnic”. So there are no accusations of provoking hatred and discrimination for the editors of Blitz.bg when they publish stories such as: “A Gypsy went crazy and verbally attacked the mayor of his village”, in which case the ethnicity of the attacker is of the same importance as the color of his hair.

But the worst cases of needless ethnic identification can be found in the media that have not signed any ethical code. A “fine” example is the so called information agency PIK. In its content we get informed how “Roma are crawling like cockroaches” for example. The websites, papers, and television channels directly run by the far-right political parties which are in the Parliament also fall in this category. The only thing an NGO journalist ethics commission can do in their case is to publicly condemn them. From that point on there are state organs like the Commission for Protection against Discrimination and the Bulgarian judiciary.

“The abstract use of words like “gypsy” or “Roma” is not discriminatory in itself – there are expressions like “gypsy summer” (when the weather in the first months of the autumn is still warm), or “gypsy music”, “gypsy speak,” etc. All words and expressions must be measured in their respected context and sense,” says Kashamov. In other words – outside of brutal examples like the popular neo-nazi slogan  “Turn the gypsies into soap!” or recorded angry Roma statements like “Turn the Bulgarians into soap!”, hate speech is a subjective concept in the ethical or legal world. Although it is prosecuted in the Bulgarian and the European legal frameworks, the identification of the use of hate speech can take a large amount of time in commissions and courts.

At this time, the news feed, filled with dubious qualifications does not stop. Texts like “Has the President ever seen a gypsy?” and “Who is the gypsy who is going to apologize?” by media mummies like Kevork Kevorkian, published in Blitz.bg, are competing in provoking hatred with racist public statements by MPs and ministers. And the sensitiveness of society to the use of ethnic and other unnecessary identifications as  examples of hate speech is becoming duller and duller every day.

The original text was first published in Evromegdan.

Konstantin Mravov
Konstantin Mravov is a member of the "Reaction" student radio team and a graduate of the Faculty of Journalism and Mass Communications at Sofia University "St. Kliment Ohridski". He is working on a wide range of social and political topics.
> see other articles <