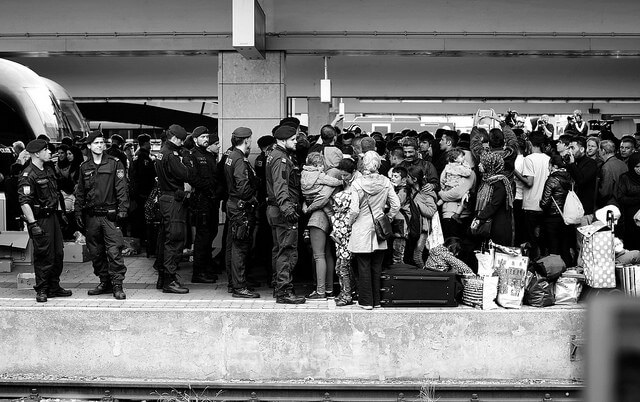 In recent months, the Austrian Social Democrats, together with their junior coalition partner, the Austrian People’s Party (ÖVP), seem to have re-established a social category from the nineteenth century and the interwar period: the notion of the “unworthy poor”. Under the assumption that their poverty is partly self-inflicted, Karl Marx and Friedrich Engels analysed the situation of a sub-proletarian class they called the Lumpenproletariat. In the view of this Marxist theorem, vagabonds, day labourers, prostitutes, “criminals” and so on, were, in contrast to the industrial proletariat, more or less human waste, passive and incapable of recognising the necessity of revolutionary politics. Of course the bourgeoisie wasn’t troubled by these assumptions at all.

With the recent attempts to cut social benefits for acknowledged refugees (in spite of violating the principle of equality), the Austrian government is about to establish a new sub-proletarian class.

Today the “migration problem” is being used to refresh the notion of dangerous and useless vagabonds who are a threat to society. With the recent attempts to cut social benefits for acknowledged refugees (in spite of violating the principle of equality), the Austrian government is about to establish a new sub-proletarian class. This policy comes hand in hand with preparations to cut financial aid for non-EU citizens. For example, child support for workers from Eastern European countries is planned to be capped at the amount people would receive in their home countries. The dominant credo at the moment is “that something has to be done”. The Austrian foreign minister, Sebastian Kurz, and the interior minister, Johanna Mikl-Leitner (jointly with her counterpart in government, the minister for defence) are openly violating European Community Law by trying to impose so-called daily and general “upper limits” (Obergrenzen) for refugees, illegally forcing them to wait at the Austrian border before they can apply for asylum. At the same time, politicians try to show strength on the “home front” by proposing the above-mentioned law restrictions. Of course, the true “gains” of the discussed measures for the public treasury would be minimal (perhaps 30 million a year), but the effects for the poorest in society will be severe. Keeping in mind that most of the refugees arriving in Austria are minors or young adults, the current integration and social policy is forcing them into an inescapable poverty trap. We are witnessing the construction of a new isolated social group with people thrown back to rely only on the solidarity of their families or ethnic groups. It is a development other European countries have already gone through.

Efforts to keep out refugees, which were increased at the Western Balkans conference held in Vienna last week, go hand in hand with restrictions against foreigners within the country. The effects of these disastrous measures are unforeseeable – for Austria but also for Europe. At the time of writing, Greece recalled its ambassador because Austria did not invite a Greek representative to the aforementioned Vienna meeting. The intended “domino effect” – closed Austrian borders causing delays and barriers for refugees – started already with the announcement of quantitative restrictions. How safe can an acknowledged Afghan refugee feel in Austria, while being marked as a threat to the social framework and while seeing images of his fellow countrymen being rejected at the Macedonian border – a border that will soon be, according to Mikl-Leitner’s proposal, protected by Austrian police forces? Refugees in Austria are more and more identified as the main problem, without regard for their actual legal status. A number of commentators naively hide behind the imperative of what they believe are incontrovertible principles such as the right to asylum and the principle of equality. But the reality is that we are on a dangerous path, where governmental policy is creating poverty as well as fighting the poor at the same time – and there is no one willing or capable to defend their interests.