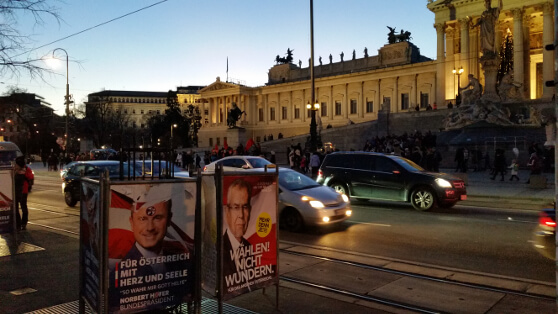 Despite his involvement in misogynist publications and membership of a pan-German nationalist association, the right-wing FPÖ’s Norbert Hofer currently leads the polls and many commentators are wondering whether his election will provide the breakthrough for the Right in Europe’s old West. Yet, the real question is not who will fill the mainly symbolic role of president. Instead, we should be asking whether next year will see the formation of an Austrian government led by a party which has a worrying record of links to the neo-Nazi scene, has cooperated internationally with the likes of the KNP, the (Slovakian) SNS and revisionists in Serbia, and whose representatives were at hand to approve the annexation of the Crimea in 2014.

In the last decade, the FPÖ’s star has been continuously on the rise as Austria’s two established parties of government, the SPÖ (traditionally centre left) and the ÖVP (traditionally conservative centre right), have become damagingly associated with indecisive, ineffective coalitions. Since 2008, they have been leaking votes, with the blame for a rise in unemployment, price inflation and a perceived lack of competitiveness being put squarely on their shoulders. However, there has nonetheless been a noticeable change in tone during the course of the last year and this can generally be traced back to the refugee crisis, its political impact and the way in which the Austrian Right has been quick to capitalise on the situation.

As one of the major gateways to the West, Austria saw considerable movement of peoples last year. In December 2015, the Austrian Interior Ministry stated that some 600,000 refugees had passed through Austria in the preceding three months and that c.100,000 refugees had applied for asylum in the country within the course of the previous 12 months.

While many initially met the refugees with enthusiasm, with civil society taking up the slack left over by the state (and some 100-150,000 attending a charity concert in Vienna’s Heldenplatz), there was also widespread concern at the absence of normal registration procedures and the Austrian Right has made good use of the fear factor of images of large groups of mainly young male refugees making their way to and across the Austrian border. The effect of these fear tactics can be seen in, for example, the fact that the number of firearms in circulation rose by 9% from the end of 2014 through to the end of 2015 and many have clearly been unsettled by, at the very least, the uncontrolled manner of the immigration process.

This disquiet has hardly been assuaged by the comprehensive and often sensationalist media reporting of terrorist attacks in France, Belgium and Germany, with the Austrian Right quick to connect terrorism and immigration.

And, with this reinforcing the impression of ineffectuality long associated with the mainstream parties and the coalition they form, there has been a clear response at the ballot box. In both the federal-provincial elections at the end of 2015 and the presidential elections at the start of 2016, the increasingly well-organised FPÖ (Austria’s biggest right-wing nationalist party) was able to consolidate its ever-stronger position in Austrian politics by taking a considerable number of votes from the conservatives (ÖVP) and the central left (SPÖ).

The presidential election results were particularly poor for the governing coalition, with neither the SPÖ nor the ÖVP’s candidate able to top 11% of the vote. Consequently, the Austrian Chancellor, Werner Faymann, lost the support of his party (the SPÖ) and saw himself with no choice but to resign, being succeeded (in an internal party process) by the charismatic ex-chairman of the Austrian Railways Holdings, Christian Kern, in May 2016.

As the leader of the ÖVP, Reinhold Mitterlehner, has only been in his job since the end of 2014, the conservatives have done little to change their personnel. However, certain politicians within the party have clearly been looking to raise their own profiles and to counteract the flow of votes to the FPÖ by adapting their own political positions and thus contributing to the general drift to the right. Figures such as Wolfgang Sobotka (Minister of the Interior) and Sebastian Kurz (Foreign Minister) have attracted particular attention with their statements. Draconian social insurance and underpaid obligatory work proposals for migrants as well as endless debates on the clothing of Muslim women and praise for the much-criticised Australian system of border controls  have helped to boost Kurz’s personal popularity, but represent a much harder line than that previously associated with the former secretary of state for integration.

Although to a lesser extent than its coalition partner, the SPÖ has also looked to accommodate itself with the changing circumstances. Throughout the summer, Christian Kern (Austrian Chancellor, SPÖ) competed with the aforementioned Kurz as they played to the home crowd in an attempt to register the loudest opposition to Turkey’s relationship with the EU. And, as early as May 2015, the party’s Burgenland branch caused controversy by breaking the party’s prior line on not working together with the FPÖ, choosing them as a regional coalition partner over the ÖVP. More recently, there has also been considerable infighting in the SPÖ’s Viennese branch as its right-leaning component seeks to assert itself and, only last week, the Chancellor himself adopted a conspicuously friendlier approach towards the FPÖ leader Heinz-Christian Strache in their televised debate.

And, with both the SPÖ and the ÖVP now treading water electorally and coming increasingly into conflict with one another within the coalition, it is to be expected that more appeasement of the Austrian right is yet to come. In particular, talk of an early general election in May/autumn 2017 is likely to see both parties scrambling to accommodate themselves with emerging political realities, with the FPÖ currently almost certain to emerge as the strongest party.

Of course, there isn’t just movement on the right of Austrian politics. Six (very nearly seven) parties were elected in 2013, with a wide range of political directions represented. In the NEOS, a liberal-orientated party is now present in the Austrian Parliament, while the Greens continue to progress, gaining 12.42% of the vote at the last general election and sitting (as junior partners) in the provincial governments of six of Austria’s nine federal provincial states. However, the NEOS scraped into the Austrian Parliament for the first time in 2013 with 4.96% of the vote and the Greens new found success has been limited to hovering at just over 10% of the vote for the last three legislative periods. Meanwhile, the FPÖ is an established party which has only failed to top the 15% mark on two occasions since 1990. Furthermore, the FPÖ mainly fell beneath this mark as a result of its own internal power struggles and the emergence of the now slowly-dying BZÖ splinter group during the ÖVP-FPÖ governing coalition between 2000-2007.

Indeed, the FPÖ is no stranger to government, having been part of three Austrian governments since the mid-80s.

The FPÖ isn’t just a provincial or historical party either. With education levels factoring heavily into voting patterns  and only 14.6% of the population holding a tertiary qualification, the FPÖ is also increasingly managing to get its message across in larger urban areas. In 2015, for example, it took 30.79% of the vote in the Viennese elections in what was only an increase of 5.02% on its previous haul. Furthermore, it has not only now topped national polls for the best part of the last two years, but, more worryingly, its rhetoric has also become salonfähig [socially acceptable]. The party itself sits in provincial governments in Upper Austria, Burgenland and Carinthia, and Austria has seen a general tendency towards a growing erosion of formerly acceptable rhetorical boundaries, with politicians scrambling to look tough and nationally-orientated following the backlash from the migrant crisis.

It isn’t therefore so much a question as to whether Austria will wake up to a victorious Norbert Hofer on the 5th December, but much more whether Hofer will be waking up and looking forward to putting his signature to FPÖ government legislation as early as May 22nd 2017.

Matthew Cruickshank
Matthew Cruickshank is the website editor and event co-ordinator of Time to Talk, a network connecting debate centres all over Europe in order to stimulate discussion of key socio-political topics.
> see other articles <