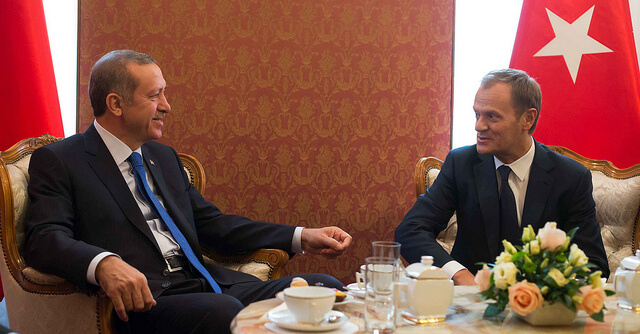 Angela Merkel must have thought she had finally settled things onto the right track. On the one hand, her pledge to accept Syrian refugees has earned her a reputation as a true stateswoman, unlike other European leaders who timidly avoid meaningful rhetoric about refugees. On the other, it has plunged her into a fierce political struggle inside her party, split the country into two distinct camps, and made refugees the subject of intense debate in Germany for an entire year. It soon became clear that her open-door policy is, unfortunately, backfiring. With no visible strategic planning, thinking only of last-minute damage control, she conducted rushed negotiations with Turkey to seal this deal – a deal that, in the end, offers no resolution but claims to ensure that no new refugees will enter Europe.

International law guarantees every individual the right to claim asylum in the country of their choice. Asylum claims cannot be processed en masse. It will not take long for the first lawsuits to arrive in Strasbourg.

The deal, struck in March between the EU leaders and the Turkish government, is nothing more than a sham. Its only purpose is to close the Balkan route by which refugees have been entering Europe. Turkey promises to shut its borders and sea routes to prevent refugees from reaching Greece. Those lucky enough to land on Greek shores, despite these restrictions, will not be allowed to claim asylum. They will be forced to return to Turkey. Under this agreement a “human exchange” will be allowed: for each refugee deported to Turkey, a Syrian already settled in Turkey will be allowed to come to Europe. Not exceeding, however, 72 000 people in total. Erdoğan, in turn, receives a large financial aid package, the gradual introduction of visa-free access to the EU for Turks, and a promise of renewed EU-accession talks. This deal is a disaster and discredits Merkel.

The deal is a sign of desperation. It demonstrates a lack of any long-term management, cooperation, legality, and common sense in envisioning the EU. It seems that the only thing politicians are now interested in is keeping the subject of refugees out of the press, and refugees themselves as far away from their own national borders as possible. At least until the next elections. The dominant political rationale nowadays is to hold onto power rather than striving to do something meaningful with it. It is naive to think that refugees would be content to remain in Turkey given the atrocities they have fled and the trials they are willing to overcome for the promise of a better life in Europe. Hoping that they will not try to find new routes into Western Europe, or that Greece will successfully administrate its refugee crisis, is wishful thinking.

Moreover, the idea itself is illegal. International law guarantees every individual the right to claim asylum in the country of their choice. No state is permitted to prevent people from claiming asylum; it must process every claim individually, assess the individual reasons and only then may the claim be refused. Asylum claims cannot be processed en masse. It will not take long for the first lawsuits to arrive in Strasbourg.

The core of the scandal surrounding this deal lies in its appeal to Ankara for help. Ankara has allegedly supported, financed and added fuel to the Syrian war for years. Not only have accusations surfaced that ISIS fighters have been trained on Turkish soil, but it is also clear that Turkey pursues its own interests in supporting any actions that weaken the perceived threat posed by the Kurds. Turkey must share in the responsibility for creating the situation from which the Syrian refugees are fleeing in the first place. This is not a matter in which one can seek Turkey’s help. Instead the EU should focus on pressurizing Turkey to refrain from such counterproductive actions.

Is it a good idea to ask the Turkish regime to keep these refugees on its soil? Turkey’s human rights record is disastrous, and more than two million Syrian refugees are already living in a precarious situation in Turkey’s refugee camps. Their human rights are not guaranteed; they are often forbidden to work, and for any employment they do obtain they are paid less than minimum wage. Moreover, there are many instances in which Syrian children have been forced to work in order to secure the family’s income, or worse, that they have been forced into prostitution.

However, it seems you are obliged to agree with the business partner you have chosen. Authorising the prosecution of German satirist, Jan Boehmermann, at Erdoğan’s request, must have been a bitter pill to swallow for Angela Merkel. At first glance the whole issue seems absurd: an intentionally provocative satirical poem by a German comedian about Erdoğan, read on a popular TV program, and a Turkish president, so offended he files a lawsuit and personally requests the head of state for prosecution of this offense. Which was more offensive, the criticism of his attacks against minorities and political opponents or the allusion to his “small tail”? Erdoğan is well-known in Turkey, for such “overreactions” to the criticism of journalists, activists, and opposition figures, and for far less offensive claims; indeed even mild criticism, or exercising one’s freedom of speech, provokes disproportionate reprisals.

However, this was the point of Boehmermann’s poem: to illustrate for Erdoğan the line between responsible freedom of speech and illegality in the universal understanding of human rights. The shock over Erdoğan’s request is two-fold: his attempt to silence a comedian in the European Union, not to mention the fact that the German government did not immediately dismiss it as farcical, is unexpected. However, the ease with which we patronizingly accept his actions “at home”, with which it is taken for granted that we would turn a blind eye because this is part of the deal – that Erdoğan might be an authoritarian leader, but at least he is “our guy” – is also shocking.

Merkel lost the chance to define the framework of the “partnership” with Turkey, to assert that there are rules and principles to follow and that the European Union will not compromise on these.

It is by no means insignificant that the German government has given Erdoğan’s request the green light. In fact, the law under which he has submitted his claim is a remnant of the nineteenth century, and seldom invoked. The government should not have enforced it. Furthermore, it should be left to judicial authorities to decide whether or not to prosecute the purported offender. The government’s authorisation carries a certain moral weight, and implies some degree of justification behind the claim. Moreover, opinion on this issue was evenly split, it was Angela Merkel who used her final decision to go ahead with the lawsuit.

Apparently Merkel wished to both play it safe, in order to retain her partnership with Erdoğan, who had threatened to renege upon the refugee deal, and to appear to be an impartial guardian of the constitutional independence of German judiciary. She has definitely lost her authority concerning this latter aim; she lost the chance to define the framework of the “partnership” with Turkey, to assert that there are rules and principles to follow and that the European Union will not compromise on these.

Is it really Central Europe that is behaving most shamefully?

Where does the difference really lie between the Western response to the waves of refugee and that of Central/Eastern Europe? An abyss has been created, and a dividing line clearly constructed, to draw attention to and denounce the shameful and backward behaviour of the Visegrad Four (V4) governments in their responses to this crisis. This is, by no means, a justification of their actions; however, in the final analysis, it seems that the real difference is merely rhetorical. Western public opinion is more sensitive and politicians take meticulous care not to say anything inappropriate, or ideally, not to comment at all. Yet, they are content to shower money on Turkey or Morocco to complete unpalatable tasks, and to keep refugees and migrants on foreign soil, often by any means necessary. They promote increased militarization of the Mediterranean, set up temporary border checks between themselves and frame occasional shootings as “security operations”.

Hungarian Prime minister, Viktor Orbán, on the other hand, has been more of a “man of action”, constructing a fence himself, while the Slovak and Czech Prime ministers are talking more than acting, electioneering rather than showing the slightest interest in resolving the issue. Unfortunately, we may have to resign ourselves to the idea that this situation is just as bad wherever you look. Not only is the German government willing to reach a compromise with Erdoğan’s regime on what was thought to be an untouchable freedom, leaving one to wonder what some governments will one day be willing to sacrifice, say, at the request of the Saudi king or the Chinese president. But, in addition to this, other Western governments lack any strategic thinking on the issue and are unable to undertake any statesman-like actions. They refuse to put human rights concerns before their economic interests. They are not willing to seriously and effectively pressurize our Middle Eastern “friends” to stop financing this brutal Syrian war. In fact, they merely continue to implement the same feeble measures: they are sticking their heads in the sand, and hoping the problem will magically evaporate, or, at the very least, stay away from their borders.