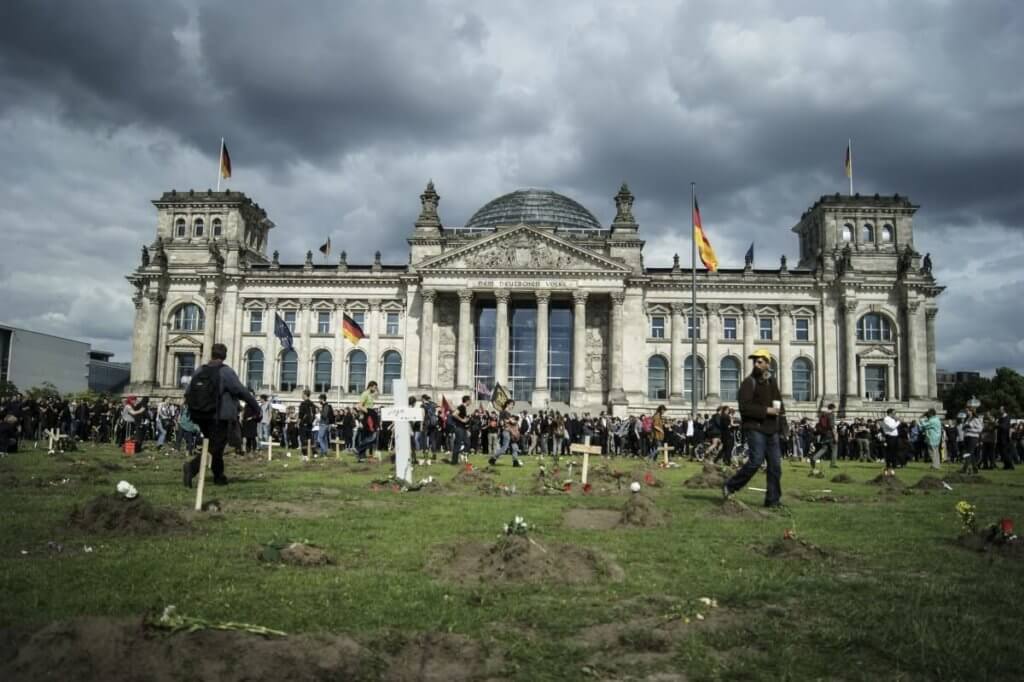 Protest outside of German Parliament in June 2015. Photo courtesy of Natalia Sawka

Following Macron’s victory in France, all eyes are on Germany, where the September elections are being billed as that which will determine the future of the EU. While the threat of the far-right appears diminished, the left remains divided, unable to challenge Angela Merkel’s dominance. Whoever wins it is unlikely any force will offer a coherent alternative to German exceptionalism in Europe.

2017 is setting the stage for the future of the EU itself. Not because there are more elections this year than usual, but because these are particularly vital elections. Across Europe, established political parties have been confronted with an ever-growing skepticism, which, it is feared, could result in significant gains for right wing populism. The elections in the Netherlands in March where celebrated as a victory of liberal democracy, even though Wilders’ Partij voor de Vrijheid is now the second strongest political party. In France, the far right populist Marine le Pen made it to the second round of the elections, before Emmanuel Macron, former minister of the economy of the Hollande administration won the runoff. Elections are yet to come in Bulgaria and the Czech Republic.

In Germany, meanwhile, the political landscape looks rather familiar. Here, only a few months before the elections, it seems like the threat of the far-right has been evaded successfully. The most powerful country in the European Union seems to be stable again: polls predict a surprisingly balanced outcome between the two big parties of the center, the Christian Democrats (CDU), and the Social Democratic Party (SPD). In contrast to the French presidential election system, the German chancellor is not elected by a popular vote. Instead he or she is voted for by the members of the Bundestag, the constitutional and legislative body. Germany is a federal parliamentary republic, with proportional representation and a 5% parliamentary entry threshold for small political parties.

The open question concerning Schulz is whether his leftist rhetoric is an elaborate campaign act or if there is real substance to it.

The Social Democratic Party was declared dead by many until Martin Schulz, former president of the EU parliament, declared his candidacy for the Social Democrats. All of a sudden the poll results went from a record low to a record high of 33%, thereby enabling the SPD to take the lead for the first time in ten years. Schulz has subsequently been hailed the epitome of a real political alternative to Angela Merkel ever since and was elected party leader with an astonishing 100% of the votes.

On Twitter, Facebook and Reddit people have hacked the symbolism of the US-American Alt-Right to express their euphoria for the candidate with slogans such as: “The Schulz train has no brakes” and “We will build a bridge to the UK and make UKIP pay for it.” Like Trump support on 4chan, it is not always clear how to draw a line between fandom and ironic inside jokes, trolls looking for a good laugh. More interestingly, however, these slogans have rapidly become diffused by the traditional and highly conservative German media.

The open question concerning Schulz is whether his leftist rhetoric is an elaborate campaign act or if there is real substance to it. Schulz claims, with some irony, that he wants to push back the ‘neoliberalisation’ of the welfare state even though it was the Social Democratic Party under Gerhard Schröder which introduced the Agenda2010 reforms, cutting back the welfare state and increasing flexibility in the labour market. Schulz’s political role during this period can indeed be seen as rather ambivalent. On the one hand he has always been known as a fierce critic of neoliberal policy. On the other, he has argued in favor of Agenda2010, calling the reforms a necessary sacrifice for the sake of future generations. Not only this, Schulz is a member of Seeheimer Kreis, a conservative group within the SPD, which has supported various processes of marketisation. As a result he has been continuously accused of populism and political opportunism.

Merkel stands for rational and pragmatic political decisions; when confronted by shifting baselines in international politics, many people prefer the status quo.

Today, Schulz’s agenda comprises free daycare for children, extensions of unemployment benefits and the introduction of a universal citizen health insurance plan. At a European level however, there is justifiable doubt as to whether a social democratic legislation would put an end to German austerity politics in particular. When it comes to EU policy there is little to no difference between the SPD and CDU and it is highly unlikely that Germany would deviate from its exceptionalist, “Pro German Europism.” More probably, Schulz would continue to reject any substantial changes to the EU, such as a communitarisation of European public debt, moderate inflation, let alone a permanent fiscal transfer. In the midst of the Greek debt crisis in 2015, Schulz even called for the elected Syriza government to be replaced by technocrat rule until stability was restored.

The lure of the status quo

In recent weeks the Schulz hype has waned a little, leaving the Social Democrats at 29% in the polls at the federal level. In last week’s elections in the German states (Bundesländer) the Social Democrats did not benefit from the Schulz hype at all. On the contrary, they actually lost voters in Saarland, Schleswig-Holstein and North Rhine Westphalia. All of these state elections are said to be touchstones for the September vote. Perhaps the key reason for their struggle is that the Christian Democrats (CDU) and especially the German chancellor Angela Merkel remain popular amongst many voters (36%).

For while Merkel is being called “Volksverräter” (a traitor of the people) by the far-right, she is also seen as “the leader of the free world” by many more. This is especially true following UK’s Brexit vote, Trump’s election as president of the US and in a climate of ascendency for fascist oriented groups. For her supporters, Merkel stands for rational and pragmatic political decisions, presented in a soothing manner, almost a German manifestation of Margaret Thatcher’s TINA principle, ‘There is no Alternative.’ Confronted with shifting baselines in international politics, many people prefer to stick to the status quo, fearing that things can only get worse.

The overwhelming success of Schulz and Merkel’s persistent popularity has marginalized the smaller political parties.

These two factors – the overwhelming success of Schulz and Merkel’s persistent popularity – have marginalized the smaller political parties. Plummeting poll results for the German right wing populist party (AfD, currently at 9%) have been a great relief for many commentators. However, other small parties like the Greens (Bündnis90/Die Grünen, 7%) and the German Left (Die LINKE, 9%) are also facing diminishing results.

The Greens have long been flirting with the option of forming a coalition with the conservatives. Now, this overt split between conservative and left wing factions within the party has left them without a coherent agenda. Die LINKE, meanwhile, is obviously struggling to distinguish itself from the leftist campaign of the social democrats. Nonetheless, their election program does differ on many issues including a 75% income tax on those earning over one million euros, and increased social benefits. One of their most striking proposals is to disband NATO and replace it with another organization that includes Russia. And as if this was not enough, the German Liberals (FDP, 6%) have also returned to the stage, a party currently not represented in the Bundestag. This is in part due to the popularity of their charismatic young leader Christian Lindner and an effective media campaign.

Perhaps the most interesting aspect of this autumn’s German election is how the political debate will shape the Schulz campaign and by extension how the Social Democratic Party will position itself when confronted with the option of coalition with the Greens and the German Left. At the same time, especially when it comes to Europe, real change is clearly needed. The European Project is still in danger and a new common agenda must be established. It is highly unlikely that Schulz represents this kind of fundamental alternative.

Till Gentzsch and Valentin Ihßen
Valentin Ihßen is a Berlin based freelance journalist. He studies PPE at Witten/Herdecke University and is particularly interested in the field of democratic innovations & political theory. Till Gentzsch works as a freelance journalist. He studies PPE at Witten/ Herdecke University. His main focus is on political theory.
> see other articles <