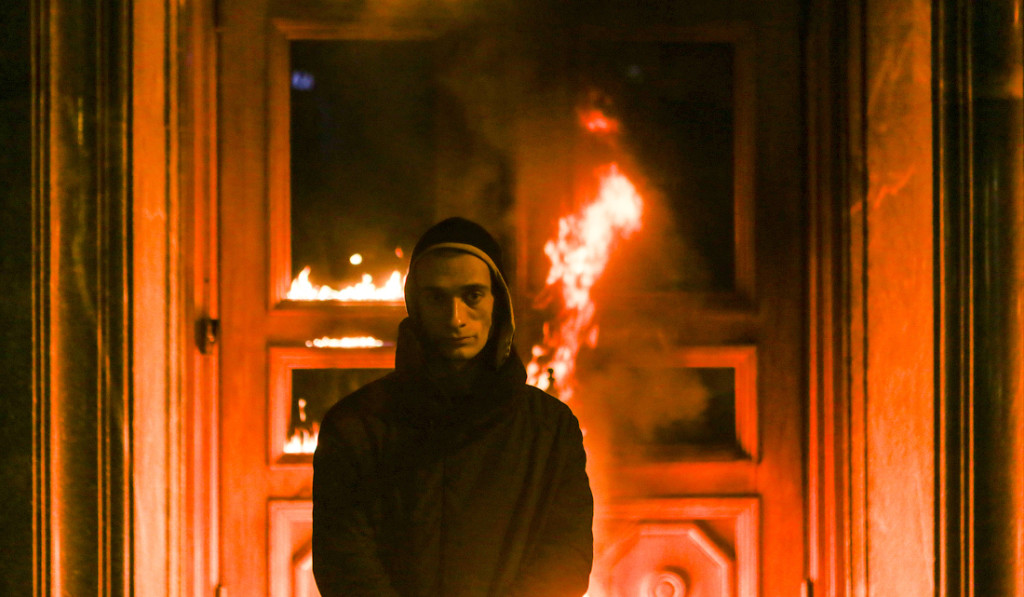 Threat. Lubyanka’s burning door was the title of Pavlensky’s action. In a brief video, the artist can be seen standing in front of the entrance to the FSB building. He has a gas can in his hands, and is standing motionless. The next morning the burnt door was fenced with a metal screen.

To the video shot during the action, posted on the web, Pavlensky attached his manifesto: “Lubyanka’s burning door is a gauntlet thrown down by society to the terrorist threat. The Federal Security Service employs non-stop terror and keeps 146 000 000 people under its power. Fear turns people into a sticky mass of separated bodies. Anyone can be made short work of who can be reached by CCTV cameras, wiretapping and passport control. Military courts do away with signs of free will. But terrorism can only exist due to an animal instinct of fear. Yet there is a defensive reflex which makes a man resist this instinct. This is a reflex to fight for your own life. And life is something worth to start fighting for.” The video and the artist’s account were deleted soon after the posting.

The action took place on the night of 8 to 9 November. Pavlensky was immediately apprehended. He will remain in detention until 8 December. He has been charged with “vandalism motivated by ideological hatred,” and is facing incarceration of up to three years. The artist argues with the accusation: “In accordance with the logic followed by the judiciary and the law enforcement, I should be charged not with vandalism but terrorism,” says Pavlensky in court. This is an act of solidarity with, among others, the Ukrainian citizens sentenced in August: film director Oleg Sentsov and anarchist Olexandr Kolchenko.

In April 2014 a group of people set fire to the door of the pro-Putin United Russia party office in Simferopol. Eyewitnesses say that Sentsov did not take part in the act. One and a half year later, he was charged with starting a terrorist organization. Kolchenko was accused of being its member. And setting the door on fire was said to be an element of its alleged activity. Kolchenko admitted he was at the place in question but did not take direct part in the arson.

Sentsov was sentenced to twenty years and Kolchenko to ten. After the annexation of Crimea, they did not renounce their Ukrainian passports, yet the Russian court deals with them as with citizens of the Russian Federation.

Pavlensky appealed to court to have his case reclassified from vandalism to terrorism. When the judge refused to, Pavlensky announced he would ignore “the rituals of the court,” and he fell silent.

This is already the second case against Pavlensky. The first one was lodged in spring, when the artist, together with a group of other performers set ablaze car tires in the center of Petersburg, and was drumming on metal sheets. The group was shrouded in Ukrainian flags. The action was meant as display of solidarity with the Maidan protesters. It was titled Freedom. The official accusation was also that of vandalism.

And still earlier, Pavlensky sew his mouth shut in response to the Pussy Riot being sentenced for their performance of the punk-rock prayer Mother of God, chase Putin away. On the Russian Police Day, Pavlensky nailed his scrotum to the cobble of the Red Square, just under the Kremlin wall. Fixation was aimed against the social apathy and Russia’s devolution into a police state. Late in 2014, sitting naked on a high wall of the Moscow Psychiatric Institute, he cut off his ear. Institutionalized at the facility was the Ukrainian pilot Nadiya Savchenko, who was transported from Donbas to Russia, where she was put on trial. Pavlensky protested against using psychiatric confinement as a means of political repression.

The Russian artist and activist, connected with the leftist group Chto Delat, Dmitry Vilensky believes that owing to Pavlensky’s actions society is confronted with difficult questions. In his commentary for Ukrainian Political Critique, he also speaks of hazards. “There are actual reasons for suspecting that the organs have long been purposefully mild on Pavlensky, looking forward to a moment when he attempts something that might be used on another level of social manipulation,” he says.

It seems that Pavlensky is approaching such a moment; in any case, he has just set in motion the propaganda machine. The statements by pro-Kremlin journalists would point to it. “He didn’t merely set a door on fire, but he carried out a well-planned action. And the door was not just any door, but a sacred door,” said in the state-owned Russia-24 Andrey Norkin. The sacredness relates to the ill fame of Lubyanka of the Soviet times.

He will not be threatened

“I’m not trying hard to get arrested, but the authorities are trying to make this here a showpiece to threaten people and control them.  If I surrender to fear, I will surrender to the authorities. This will make me accomplice to their crimes. Becoming an accomplice of the authorities, I perpetrate a crime against myself, which is worse than arrest,” Pavlensky told Opinion Daily after Fixation. His Threat has now showed that he, indeed, would not be threatened.