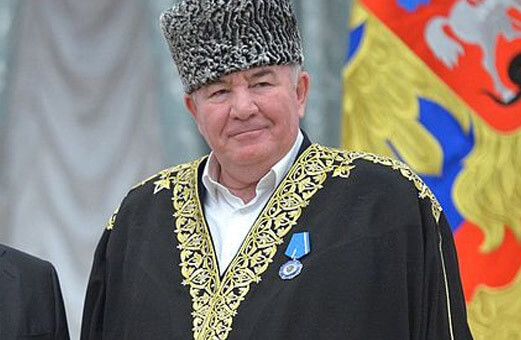 Yet another wave of bigotry swept through Russia after the main Islamic spiritual leader mufti Ismail Berdiev (the head of the Coordinating Committee of the Muslims of the Northern Caucasus), pronounced that “all women should be circumcised, in order for the Earth to be without filth, to lower the level of sexuality”. God is said to have created women for giving birth and raising children. After a wave of criticism, however, he had to alleviate his statement with words that female circumcision is not prescribed by Islam, that it is only a “purely Dagestani custom” which does not harm girls. And after all, he was only joking, wanting to say that women need to be raised better.

Chaplin as a Representative of State Ideology

His words sparked a reaction of the main orthodox bigot of Russia protoyerey (senior priest) Vsevolod Chaplin and a member of the presidential Committee for “Human Rights” Alexander Brod. It seemed like a great occasion to reveal the stuffy patriarchal entrails of society, regardless of religious confession.

Yet another wave of bigotry swept through Russia after the main Islamic spiritual leader mufti Ismail Berdiev, pronounced that “all women should be circumcised, in order for the Earth to be without filth, to lower the level of sexuality.”

Protoyerey Chaplin expressed his support to the mufti. “(“The Mufti”) commented on his tradition hallowed by centuries and adhered to by the majority of women living in that tradition. Although we – the Orthodox – have different traditions, it has never been an obstacle for us to respect the traditions of out neighbouring nations.” Chaplin continues with the proven tactic of recent years – insulting the West and its values. In his words, it’s the UN bureaucrats who insist on getting rid of similar practices with their effort to substitute religious traditions with humanist ones.

He supposes that “perhaps it’s not necessary to circumcise all women”, as Orthodox women “are not lewd anyway”. An Orthodox priest had said on the radio Echo of Moscow the day before: “And what’s actually wrong about exterminating some part of internal enemies?… Some people “can and must be killed”. After the question: who decides about who is worth exterminating, he answered: “The will of God and the will of people, with which the will of power needs to be in line… He added that Vladimir Putin also introduced pro-Western reforms at the beginning of his career, and he “began to listen to his people only several years after.”

Alexander Brod as a defender of human rights announced his readiness to negotiate over the option of performing similar operations with the bureaucrats and religious leaders of Dagestan. The operations should be performed in healthcare centres, under supervision of the girls’ parents. Thus, from his point of view, no human rights would be violated.

The logic of this defender of human rights deserves nothing but applause. Analogical questions could be posed for Mr. Brod: e.g. how about rape in healthcare centres under the supervision of parents – would it equally “not” be a violation of human rights?

Posing such questions to Mr. Brod may be useless, as he probably doesn’t understand the notion of human rights. However, what he understands is the need of his own comfort. He was accused of using financial resources from the Committee for Human Rights assigned for the reconstruction and repairs of various social facilities, dormitories for children with disabilities and children’s homes for the reconstruction of his own new flat.

The only question left to clarify is: what do such people do in such committees?

The Main Humanists in the Country

Brod soon found out he’d gone over board. The original article published in the Kommersant daily at 6:30 p.m. had a different take at 9 p.m., with the human rights activist completely changing his words: “Many countries with a wide-spread practice of female circumcision had it outlawed and it would be appropriate to follow their example.”

The most shocking fact was a petition initiated by Dimitry Tsorionov aka Enteo on the ban on female circumcisions on the territory of the Russian Federation. Enteo is an Orthodox activitist from the movement God‘s Will who publicly rallies against “sodomites” and sacrilegious people, storming “inappropriate” exhibitions.

It appears that the main obscurant and lunatic in the country is its main humanist.

And yet, looking from behind the curtain at this carnival of obscurantism and paternalism, we may assert that all the statements and reactions are mainly concerned with female chastity and a reduction of faithlessness as the main value. Which means, the denial of the freedom of women to make their own decisions over what can be done with their own body, marriage or life.

A society which maintains that “vice“ is an evil that needs to be eradicated by surgery can be forced to stop performing it only through pressure coming from outside.

However, according to the report of Pravovaya initsativa fund, it was mostly women who defended keeping the given traditions, using arguments reproducing the patriarchal wish to control female sexuality: A woman must not be sinful, “Female circumcision must be done in order to maintain order in society. Everything depends on the woman and her responsibility“; “It must be done to all Muslim women. It is obligatory. It is Sunna” (the second most important referential resource for Islam); “It was done to me and I also did it to my children and grandchildren”.

Mothers mutilate daughters, they mutilate their daughters and the system reproduces itself ad infinitum. No consensus, no direct democracy and no referendum will be of any help here. A society which maintains that “vice“ is an evil that needs to be eradicated by surgery can be forced to stop performing it only through pressure coming from outside.

A version of this text originally appeared on poleblog.sk