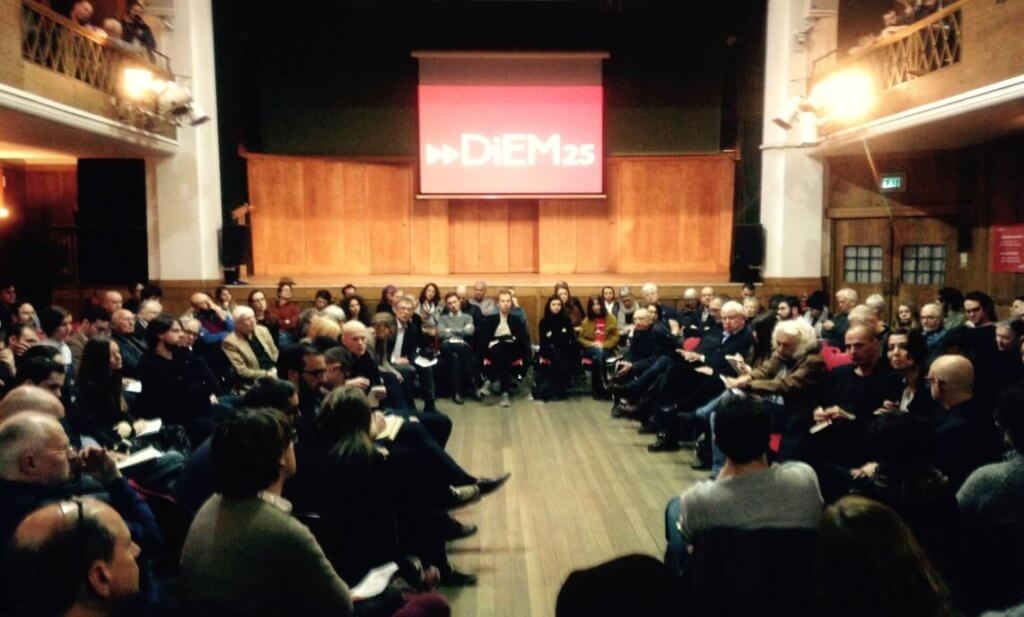 The first speaker was British musician and composer Brian Eno who said that suddenly, the idea of doing politics, which people of his generation often thought was “akin to masturbating” was something once again worth engaging in. Eno, a key figure in the development of electronic music, was also keen to note an important phenomenon concerning the interrelation of technology and democracy. He told the meeting that many of his high-tech friends in places like Silicone Valley had carefully avoided politics for a very long time because they expected that technology would “be the de facto solution to our problems”; for them politics unnecessarily “complicated the plot.” But recent events had helped us all understand that merely going along with “the drift of things” is not enough because “the technologies won’t make the choices for us, they need our guidance and our input as well.” The need to make conscious political choices was memorably summed up by Eno when he said that after the election of a serial liar in the form of Trump and, in England, of [Boris] Johnson, people had finally begun “to realise that that the laissez-faire doesn’t work — while we’re laissez-ing they’re still faire-ing — so suddenly we’re starting to think that politics might be worth doing again.” Ultimately, Eno felt that this was what DiEM25 is about: it is a movement to revive and reinvigorate this thinking that we must make choices.

Politics is wherever there is power.

The next speaker was Elif Şafak, Turkish author, columnist and academic who brought to the meeting an important set of perspectives from the current Turkish context. She began by noting that if you come from a country where democracy is obviously and openly being seriously challenged “you simply did not have the luxury of being apolitical.” But, she reminded us, one of the important, wonderful things we could learn from feminism is a recognition that politics is not only about what goes on in parties and parliaments but also about “what goes on in our private spaces, in our bedrooms, in our kitchens, in our daily lives; politics is wherever there is power”. Şafak felt that the important thing to see here was that, when approached in this broader sense, it was, in fact, now impossible to be truly apolitical. She observed that we need more people who are acquainted with different cultures to become involved in the public space and to speak up — and we also certainly need more women’s voices and stories to be told and heard.

The next two speakers were Agnieszka Wiśniewska and Igor Stokfiszewski from Krytyka Polityczna (krytykapolityczna.pl) and DiEM25’s Co-ordinating Committee.

Wiśniewska saw her work as chief editor of a political magazine as a matchmaker between grass roots movements, activists and academics so that, together, they can begin to fight for progressive change and real democracy. She told the meeting that her passion for DiEM25 stems from the fact it provides an ideal context to meet people from different backgrounds and skills, who still share the same ambitions.

Both Wiśniewska and Stokfiszewski noted that they were in the UK because they had many friends now working here and they remind us that theirs was a community that had been seriously shaken by the Brexit vote, the rise of anti-immigrant rhetoric and also the increase in violence which has, as we all know, included at least one horrific murder. Wiśniewska and Stokfiszewski were aiming, in the first instance, to work with DiEM25 in the UK to build a progressive force so that there is a chance for a fair and sustainable transition out of the EU for everyone— including the Polish community. But this UK-centred concern allowed Stokfiszewski to offer the meeting an additional wider, pan-European point. He did this by raising the rhetorical question of why the leftist project in Poland has, up until this point, anyway, failed so badly? For him, the answer was that in Poland they had been selfish. They had not understood that “it is not enough to work in one country alone to achieve progressive goals — it has to be wider project” and that they now knew they needed “to work pan-Europeanly and globally.” For them, DiEM25 is the project which can help achieve this; DiEM25 is “a new choice and an opportunity to be seized.”

Poland will be a major battleground for progress and liberty.

Wiśniewska concluded that soon Poland will be a major battleground for progress and liberty and she expressed a hope that they will be able to learn what do in order to “reverse the course of authoritarianism that Poland is currently taking.”

The first part of the meeting was then concluded by some remarks by Yanis Varoufakis.
Varoufakis reminded us that, in 2016, passion came back to politics, but in the wrong way, for it was now fuelling not progressive polices but regressive ones.

We need to be honest and look ourselves in the mirror as progressives and realise that we are dismal failures.

But, as Varoufakis observed, it is vitally important to realise that we are very far away from being efficient, we need to be honest and “look ourselves in the mirror as progressives and realise that we are dismal failures. The Labour Party, the Scottish National Party, the Green Party, Independent Progressives, are all in disarray. Corbynite Labour is too scared to talk to Caroline Lucas of the Green Party in case the Blairites attack them even more harshly. Nobody talks to the SNP in case Scottish Labour gets upset and the net result is that the Tories have complete and utter dominance of the political scene. This is why DiEM is here. If we don’t manage to put forward, as a British organisation, a proposal for a New Deal for the United Kingdom and then, once we do that, to explain and to convince the people in the north of England in particular, that this must go hand in hand with a New Deal for Europe, we will have failed. Thank you.”

The meeting was then opened to the floor.

The final comment came from a woman who came to the meeting with her daughter because both her children had felt so hopeless about their future after the Brexit vote. She wanted to thank the meeting for giving her, and her daughter, things to do and hope for the future.

There can have been no-one present who didn’t agree with Yanis Varoufakis when he said he could think of no better way to end this meeting.

This article is an excerpt from a piece written by Andrew J. Brown, the full version of which can be accessed here.

Andrew J. Brown
Andrew J. Brown is a Unitarian minister in Cambridge, UK, with sympathies towards a kind of Christian atheism, religious naturalism and communalism. He is also a member of DiEM25, jazz bass player, photographer, cyclist and walker.
> see other articles <