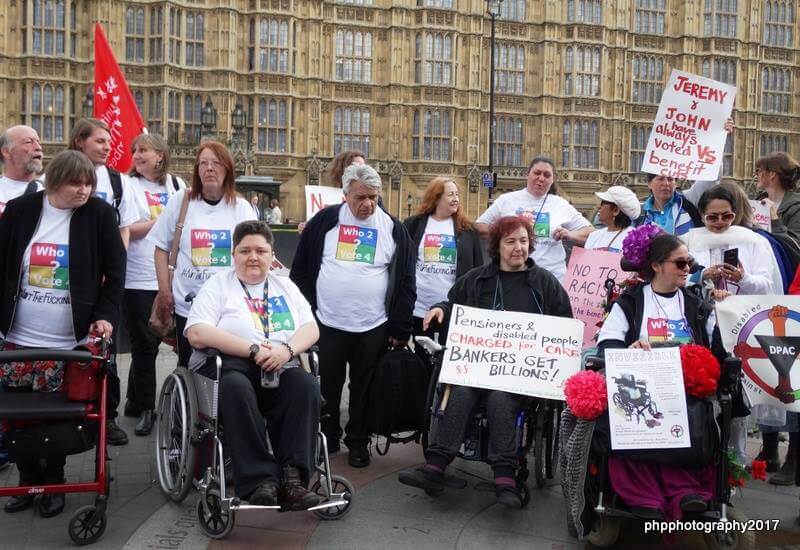 Never in my wildest nightmares did I imagine that my government would behave so shamefully that they would be subjected to an investigation of their actions towards disabled people by the UN, but that is exactly what has happened.

This inquiry, the first into any country using the Optional protocol in the UNCRPD, illustrates how obscene the government’s stance towards disabled people has been since 2010. I might have feared such treatment of disabled people in some other nations, but that this is necessary in Britain in the 21st century – an industrialised and wealthy country – leaves me asking just what has gone so badly wrong. How has this shameful situation been reached in just seven years of Tory mismanagement?

Disabled People Against Cuts (DPAC) made their first submission to the UN in 2013, in which we had to prove that the policies affecting disabled people in the UK were not only regressive but constituted grave and systematic violations of disabled people’s human rights. A team of investigators from the UN visited for two weeks, interviewed over 200 people and collected 3000 pages of evidence. These included disabled people affected by the cuts, relatives of disabled people who have died directly as a result of government policies, as well as academics, benefits advisors, MPs, Lords and solicitors.

While we always knew that this could not force our government to change course it is, at the very least, a historic, unprecedented event. In total DPAC initially raised concerns about more than 30 aspects of government policy which were impacting negatively on the lives of disabled citizens. Since then many more attacks have followed.

We hope that as well as shaming the UK government internationally this inquiry has provided a formal record of the many atrocities disabled people have been forced to endure over the past years and will be a lasting testimony to the memory of the many thousands who have been mercilessly driven by Tory politicians and in particular by Iain Duncan Smith to their early and unnecessary deaths.

Britain’s benefits, including pensions, are among the least generous in Europe. Women born in the 1950s have lost up to 6 years retirement income following changes which have left many in poverty.

Tory welfare reforms have led to thousands of unnecessary claimant deaths either through people falling into debt, becoming more ill, both physically and mentally, or through having their meagre benefits sanctioned and stopped completely. David Clapson, to take just one example, was an ex-soldier with diabetes who died when his benefits were stopped and he could not pay for electricity to run his fridge to keep his insulin. His family are still fighting several years later for a Coroner’s Inquiry into the cause of death.

For people with a Mental health condition sanctions rose 600% in 2015. People can be sanctioned and left with absolutely nothing from the state for up to 3 years.

The Tories are on track by 2020-21 to spend the lowest amount on welfare, as a percentage of GDP, in 30 years. In total 2.8 million disabled people are in deep poverty (living on 50% below the median income). Millions of people including nurses, police officers and others in work have been forced to use foodbanks, which provide food parcels for those in dire need who can’t afford to eat.

In spite of these cuts to basic benefits that are vital to disabled people the government happily pay private corporations to carry out inadequate testing of disabled people.

Foodbank use has risen to over 1 million people while the Tories have been in power. Nottingham a typical small city in the UK has more than 15 foodbanks. The Food Standards Agency says that 8 million people in the UK are in food poverty and many low income households cannot afford to eat regularly. Nearly 400 citizens died from malnutrition or hunger in 2015 up 27% from 2008 while 2 people a day were admitted to hospital with malnutrition in 2016. Victorian diseases such as Ricketts and Scurvy that had been eradicated for years have returned. Teachers have to provide food in schools for starving children.

Further benefits for disabled people have been slashed with 20% of people losing entitlement to Disability Living Allowance (DLA) – a benefit to help meet the extra costs of disabled people and which has been replaced by Personal Independence Payments. (PIP) Over 700 people a week have had adapted vehicles repossessed due to this and are no longer able to work. Unbelievably people have also had their wheelchairs repossessed after losing DLA.

In spite of these cuts to basic benefits that are vital to disabled people the government happily pay private corporations to carry out inadequate testing of disabled people. The contract to assess people for PIP has cost £700 million in 5 years yet when people appeal against not being awarded this benefit 61% win their cases. Maximus who assess people for sickness benefits will be paid £1.6 billion for 3 years which the national Audit Office has said will cost nearly double the amount saved.

The UK is also heading towards the bottom of the OECD league table for spending on social care as proportion of GDP which by 2020 is projected to account for just 1% of GDP spending. To date councils have cut £4.6bn from adult social care budgets since 2009-10, equivalent to almost a third of net real terms spend. 400,000 fewer disabled people are now entitled to publicly provided care and many have to pay much more towards the cost.

Large numbers of older disabled people receive nothing more than a 15 minute a day visit which doesn’t even leave time for them to be fed or bathed. The concept of dignity in old age has been lost due to the severity of the cuts to care funding.

Councils are forecasting a £4.3bn black hole in social care funding in England by 2020. Closure of the Independent Living Fund, which provided financial support for independent living for people with high support needs on top of Local Authority funding, has resulted in care packages being savagely cut by some councils leaving disabled people who are unable to get out of bed without help alone overnight. In some cases the physical help incontinent disabled people need to go to the toilet has been replaced by the allocation of incontinence pads so that they “are not dependent on human support”.

All of this on top of the infamous housing crisis. Homelessness has risen by 44% in London in the past five years, and 67% across the rest of England. Higher rents especially in London mean many people in work are spending about two-thirds of their income on rents while many claiming Housing Benefit are in work. In many London boroughs there has been mass social cleansing of people needing public housing with thousands of families being moved out of London to live miles away, something dramatized vividly in Ken Loach’s Palme d’Or winning film I, Daniel Blake.

These cuts are just the top of the iceberg in terms of the attacks disabled people are facing daily and I don’t even start to look at the attacks that have been faced by women and younger people in the UK. Disabled People have had enough of being scapegoated by this Tory government that is why DPAC are campaigning in the forthcoming election to #TrashTheTories and calling on all disabled people to vote them out. We will be protesting in Maidenhead, Theresa May’s constituency on June 3rd to make sure our voices are not forgotten.

Linda Burnip
She is a disability activist and co-founder of DPAC.
> see other articles <