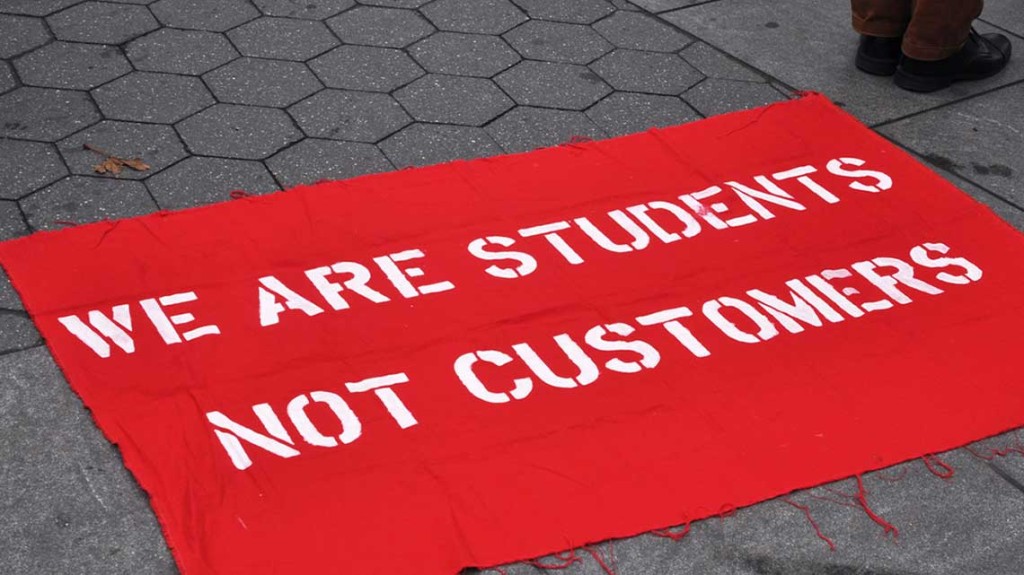 Tomek Leśniak: On the 9th of December British parliament voted in favour of triple increase in tuition fees. In the next few months, further radical changes in higher education will be introduced. But it isn’t only higher education, that is now undergoing radical reforms. What about other levels of education?

Adam Wright*: Well, the coalition government has certainly not wasted time in making radical changes to education in England and Wales. After being elected in May, the government rushed through their Academies Act (2010) before summer recess. This piece of legislation gave the green light for further marketisation and fragmentation of state education. The Academies Act has made it possible for all state schools to apply for ‘Academy’ status. The Academy scheme was brought in by New Labour as a means of modernising failing schools in deprived areas through partnerships with local businesses, charities and faith groups that can act as ‘sponsors’ of the school. The extension of the Academy status has meant that the scheme is no longer aimed at helping failing schools; in fact, the new Secretary of State, Michael Gove, has actively encouraged the very best schools to become Academies.

You’re underlining that coalition’s education policy consists of both neoliberal and communitarian elements. How does it work in practice in the case of Academies? What are the main drawbacks of this solution?

Critics suggest it will increase the problem of inequality in school standards, as well as the problem of inequality of educational performance between social classes as a result of the majority of outstanding schools being in middle class areas. New Academies will not need a private sponsor as they did under the old scheme (although they can have one if they wish), but the general traits and problems of the scheme remain the same: 1) Academies will be autonomous entities, free of local authority control. They are run by a small board of governors who are not accountable to local government. The governors needn’t have a single staff representative, and the parent representation can be considerably lower than in locally maintained schools, 2) they will set their own pay and conditions for teachers and support staff. Academies can change the working conditions for teachers, making them work longer hours for the same pay. They can also implement performance-related pay and give new members of staff different contracts to existing members, 3) they have some ability to ‘hand-pick’ their pupils, based on their own admissions criteria, 4) they can diverge from the National Curriculum to some extent.

What about other changes?

In the expansion of Academies, the government has also removed regulations to allow the set up of ‘Free Schools’ based on the Swedish model of small, autonomous schools set up by communities. The Free Schools agenda allows parents and teachers dissatisfied with their local schools to get government money to start their own schools. The thing to note about free schools is it has paved the way for private companies to set up and run independent, but state-funded schools and make large profits directly from the tax-payer. These schools will again be run with ‘Academy’ status and thus have all of the issues I have already raised with accountability and fairness. One further curious policy is that of the “pupil premium”. This is passed off as a Liberal Democrat policy, but was in fact advocated by the Conservatives as early as 2007 in one of their policy papers on education. The premium is designed to give additional funding to students from poorer backgrounds, in an attempt to decrease the gap in educational attainment between the richest and the poorest families. We are yet to see this policy fully emerge and many remain sceptical as to its ability to solve the problem, when one considers that the rest of the coalition’s policies seem to extenuate the problem of inequality in education.

How is the government justifying these reforms? Were justifications changing over time?

There are several ways in which the government are justifying these changes. We have to take these policy changes in the context of a wider policy discourse of ‘post-bureaucratic’ public services. The government, especially the Conservative Party, are extremely supportive of the market as a mechanism for running public services. Their position falls into the ‘citizen-over-the-state’ tradition of neoliberalism, seeing market competition as productive and essential for consumer choice, whilst the State and bureaucracy are considered inefficient, costly and illiberal. The central idea within post-bureaucratic discourse is that of ‘empowerment’. The government’s policy agenda is framed around the empowerment of both parents and teachers. Whilst parents gain greater choice of schools and more powers to set up their own schools, teachers are offered more power to discipline pupils and take control of the classroom. Both sides of empowerment are seen as possible through the removal of legal and bureaucratic barriers set up by the previous government. New Labour are frequently made synonymous with over-bureaucratic and centralised control of education. It was a negative image of New Labour which worked well during the general election campaign. By providing the feeling of empowerment, as well as creating a negative stereotype of bureaucracy and centralised management, the government have managed to gain some support for their policies, although many still appear sceptical.

Does the government refer also to the current economic crisis?

Yes, the coalition have attempted to link public spending cuts, privatisation and marketisation into the necessity of reducing public debt. This is especially so in the case of higher education, where there is deemed a crisis in funding which must be met by an increase in funding from university fees and private capital. Explaining cuts and higher fees in terms of necessity has not been easy and the idea that “we’re all in it together” is wearing thin with many people who feel unfairly hit by the cuts. But the logic at work here is a logic of ‘responsibilisation’. The government are trying very hard in their policy discourse to deflect problems from the State onto the individual, and in doing so retreating from their own responsibility to solve social problems being caused by their own neoliberal agenda.

Now, what is the relation between current and past education policies? Is it a revolution or can we talk about some continuity in British education policy from Thatcher onwards?

Michael Gove would certainly like to think of this as a revolution. I see it, however, as merely the next stage in a longer revolution in education, which goes, as you have suggested, back to Thatcher. Since Thatcher’s reform of the education system, opening it up to market choice and competition, there has been a continual process by which neoliberal market logics have changed the very nature of education in Britain. New Labour did little to stop this process, and in many ways they deepened it, with the introduction of Academies, the privatisation of local educational authorities, private finance initiatives in the building of new schools and the outsourcing of fundamental support services. At the same time, New Labour sought to build on this neoliberal agenda with a communitarian discourse which sought to bring together public and private actors for the common good, as well as placing greater emphasis on citizenship and social inclusion. To a great extent, however, this communitarian agenda was undermined by the market logics that continued to play a part in education. Neoliberal discourse changed the image of education from a public good into a commodity to be bought and sold. Not only that, it changed the very identity of parents and teachers, subjectifying them as rational and self-interested individuals in competition with one another. This worked counter to the communitarian attempt to bring communities together to cooperate and work in partnership. The coalition government have dropped any scepticism that Labour may have had about the market. Their policies not only continue the neoliberal agenda, they broaden and deepen it. The function of the ‘empowerment’ agenda is not in fact to empower anyone, but to provide greater control over education through market logics. The fact is, that in order to be empowered, parents and teachers must work within the market mechanisms set out by government. This automatically cuts off other democratic alternatives that may have been possible, as they do not fall within the logic of the market. Empowerment thus entails a subjection to the logics of competition, rationalisation and responsibilisation, further helping to bring to life the neoliberal ideal of the rational self-interested consumer.

*Adam Wright – PhD student at the University of Essex. He is writing a PhD thesis on the educational policy of Labour Party.