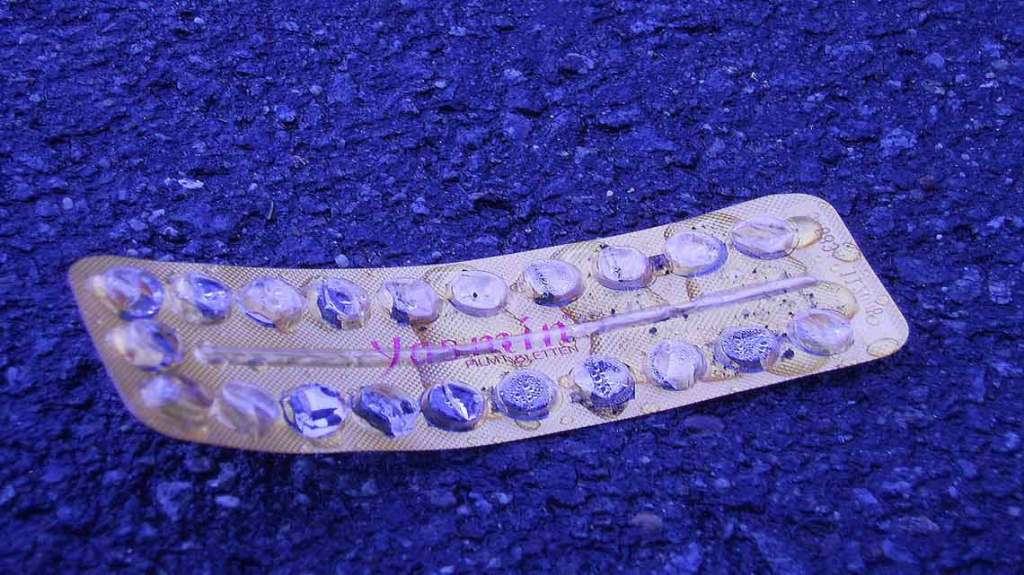 [dropcap]T[/dropcap]he morning after pill, according to the Polish law, can be prescribed not only by the gynecologist, but by any primary care doctor. It is more and more often said – and numerous publications telling the stories of the women who were refused the help in the hospital or clinic show it in a straightforward way – many doctors don’t care about the law and a woman threatened by unwanted pregnancy is not treated by them as a patient who, according to the rules included in the medical profession act and in the Hippocratic oath , they are obliged to help.

[quote align=’left’]The doctors prefer to break the law and the professional ethics’ rules than prescribe the morning after pill.[/quote]It may seem that in the country, where abortion is prohibited for social, economic and psychological reasons, what is one of the most restricitve solutions in Europe, the doctors should help women avoid the drama of unwanted pregnancy. But it doesn’t work this way.

The doctors prefer to break the law and the professional ethics’ rules – because that’s what they do when refusing to help the patient – than prescribe the morning after pill.

I recently had an opportunity to see how humiliating the way that the woman in need of this pill has to get through is. I want, and I also feel that I have to tell this story in detail. Why? Because piling up such evidence is one of the ways to make the minister of health react to the unethical doctors’ behaviour.

These are the stories of asking for help in public health care centres.

My husband visited the centre on Sapiezynska street to ask for the prescription. The doctor told him that I should have gone to the maternity hospital on Karowa street, because that was where “these things” were handled – and in case of problems to come back to her.

[quote align=’right’]The doctor doesn’t prescribe such things. She doesn’t even know what’s the name of it and, besides, she has already seen the side effects of such pills and she is not going to take responsibility for it.[/quote]Maternity hospital at night: several pregnant (actually starting to give birth) women in the waiting room. The nurse responded to my question regarding the possibility of getting the prescription for the morning after pill that I could wait for the visit to the gynecologist, but it might have taken about four hours. And that she also couldn’t assure me that the doctor was going to prescribe the pill, because they did it “reluctantly”. And also that every woman giving birth that would appear in the meantime would have priority what might have make prolong the waiting time. As it’s only about prescribing the pill and every hour counts, couldn’t the doctor do it between the patients? No, a full examination is needed. What for? Because they had to check if I was not pregnant. I wasn’t – I gave them the date of my last period. But it wasn’t treated as evidence. The doctor had to check it and decide if the prescription could be given to me. Finally the nurse advised me to go to the hospital on Solec street, where much less women giving birth come and where it would be easier to find someone to prescribe the pill. So I went there.

What pill? Speak up! The morning after? We don’t prescribe such pills here!

These are the words of the nurse in the admissions. I asked if that hospital had signed the contract with the national health service (NFZ). It had. Then they should prescribe the pill. But they don’t – the contracts do not matter. I keep repeating that the nurse can’t refuse to help me on behalf of the hospital and I ask her to aske the doctor from the emergency department if he could prescribe the pill. No way. It can be prescribed only by gynecologist. That’s not true! The truth is that only gynecologists do it, but here they don’t. I’m asking to call the gynecologist. The nurse calls. It turns out that all the gynecologists are conducting the C-section at the moment at it will take about 2-3 hours (?!).  And I’m also told that such things are handled in night and holiday care centres instead of bothering people who have more serious issues to deal with. Well, I actually agree, but I’ve been sent here from the hospital to which I was sent from night care centre. What should I do? I’ve been told what to do – go to the night care centre. I go.

The doctor to whom has spoken my husband before and whom I told about my attempts to get the pill in the hospitals pours cold water on me.

She doesn’t prescribe such things.

[quote align=’left’]I keep asking if the doctor knows that in many occidental countries such pills are sold in the pharmacies without prescription? So then they probably are not so dangerous? She doesn’t know and she doesn’t care.[/quote]She doesn’t even know what’s the name of it and, besides, she has already seen the side effects of such pills and she is not going to take responsibility for it. I’m asking if she is going to take responsibility for unwanted pregnancy and mental and financial bankrupcy as its side effect (I have two children and a bank loan – I can’t afford to extend the family). It’s not her bussiness – I could have used more effective contraception.

I keep asking if she knows that in many occidental countries such pills are sold in the pharmacies without prescription? So then they probably are not so dangerous? She doesn’t know and she doesn’t care. I’m asking if she doesn’t think that as she works in the centre which has signed a contract with national health service (NFZ) then she is obliged to help patients according to the rules of the Polish law and not according to her own convictions. She doesn’t think so. I say that I’m a journalist and I ask her to give me her name and surname and I keep repeating that I won’t leave without a written refusal to prescribe the pill with a justification. The doctor’s pokerface disappears and she suggests that I went to her colleague next door to ask for the prescription. I say that I will do this, but after getting the written refusal. So she goes to the mentioned colleague to ask what should the refusal contain. She comes back relieved by her colleague’s solidarity and writes the refusal with the following content: 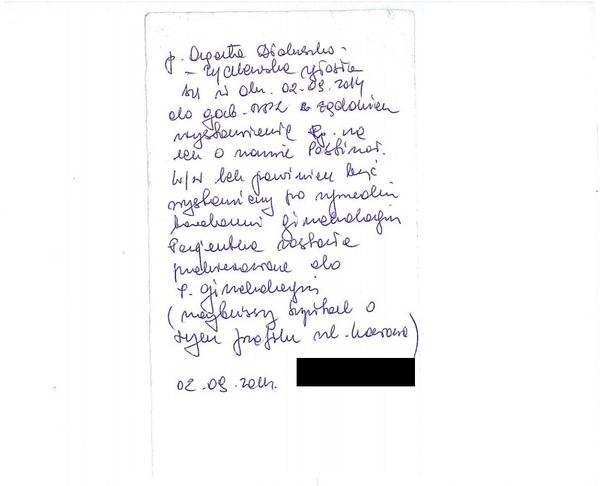 Mrs. Agata Diduszko-Zyglewska came up on 2nd Sept 2014 asking for the prescription for Postinor whichshouldn’t be prescribed without previous examination performed by the gynecologist. The patient has been directed to the centre conducting such examinations (nearest hospital with that profile on Karowa street).

[/one_half_last]
When I say that the content lacks the justification and the claim that she directed me to the place where I was supposed to be helped is a lie, because the indicated place was the one from where I was sent to her, she leaves the room. When I follow her asking for her stamp on this paper she refuses and closes the door. The end.

Now I will spoil the doctor’s from Sapiezynska and other’s doctors’ their good mood and the sense of appropriately fulfilled duty – I managed to get the pill. I received it from my friends from Cracow who similarly to thousands of Poles bought some of these pills during the holidays in European countries where the morning after pills are available without prescription and the doctors respect their patients’ right to contraception and protection from unwanted pregnancy.

When I was giving birth to my children and later on, when I visited the hospitals with them, I met nice, helpful and well-informed doctors and nurses.
For some reason, when I come to health care centres in need related to my reproductive rights, the doctors lose empathy as well as competence.
I don’t know why it is like that – I suppose that it’s about the presence of the Catholic cross in almost every public health care centre. But I know another thing: it’s unacceptable.

I don’t know if it will work, but I urge all women that have been treated like I was to speak up and start acting. Unethical behaviour of doctors is not supposed to be our common secret – it’s abusive and we can’t keep silent about it.

[infobox title=’Follow up’]
Shortly after this article was published, we received an email from the European Consortium for Emergency Contraception.

The ECEC aims to expand knowledge about and access to Emergency Contraception (EC) in European countries and to promote the standardization of EC service delivery in the European context.

The following link provides a country-specific information on Emergency Contraception availability as well as access policies in different European countries.