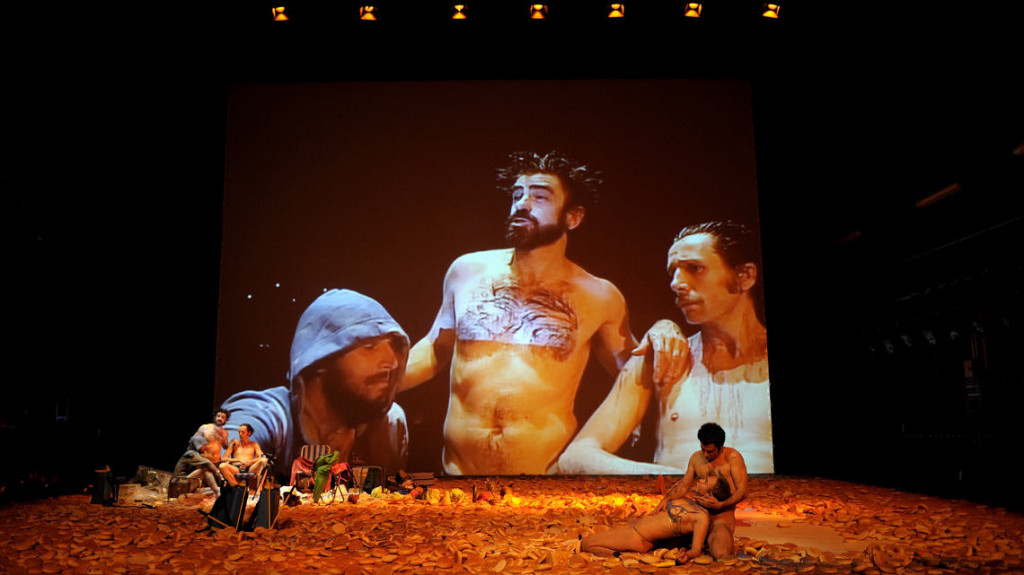 [quote align=’left’]Obviously it was (another) attack on freedom of speech, a triumph of violence and ignorance as well as an example of censorship imposed by those on their knees.[/quote][dropcap]It[/dropcap] is not just about the cancellation of another show. Nor is it about protests against other displays, nor about setting fire to the rainbow sculpture. It is not even about all these things combined. The stake is higher. Much higher.

Most comments regarding the outrageous cancellation of Rodrigo Garcia’s show “Golgota Picnic”, that was to be staged as a part of Malta Festival in Poznań, do not reflect the scale of the problem we are facing. Many of the recent opinions rightly expressing their authors’ outrage are restricted to the broadly defined domain referred to as art. Obviously it was (another) attack on freedom of speech, a triumph of violence and ignorance as well as an example of censorship imposed by those on their knees. I am not trying to deny these opinions or to downgrade them – the other way round. Yet we keep participating in something harmful, namely, considering the cancellation of the “Golgota Picnic” as a dangerous phenomenon belonging ‘only’ to the domains of art and culture, in a way detached from the broader social life, which is an actual display of the aforementioned ‘downgrading’.

The cancellation of the “Golgotha Picnic” is more than just another episode of the series initiated in the theatre by the recent conflicts around the repertoire of the Old Theatre in Cracow. Instead of thinking only about the theatre, we should collate the cancellation of the show with signing the declaration of faith by the doctors (which may become a more widespread phenomenon among other groups also). Similarly, we should collate the burning of Julita Wójcik’s rainbow sculpture at Plac Zbawiciela in Warsaw with the ‘smashing up’ of Zygmunt Bauman’s lectures, and protests against Jacek Markiewicz’s video ”Adoration” with the war on gender studies. With the return of the rhetorics employing such phrases as ‘murdering unborn children’ and ‘harmfulness of contraception”. With the revival of the traditional anti-Semitism and the rise of anti-Muslim feelings too. And also with the spread of nationalistic attitudes and homophobic behaviours… And so on and so forth.
These are not separate phenomena belonging different domains of life. It is a panoramic vista of how the more radical Right marked by the Kepel’s revenge of God has won the fight for the (broadly defined) language.

On various fronts and levels. It imposed its conceptual framework, interpretations and beliefs. Let us consider the short history of defining Hitlerism in Poland as a reflection of the scale of this triumph. Not long ago the statement appearing on the rightist Internet fora according to which „Nazism was a leftist ideology” used to evoke at most a smile of compassion or a classic facepalm. Today, this conviction becomes widespread, despite its absurdity. More and more people keep thoughtlessly repeating the claim that ”the left-wing established two of the worst totalitarianisms: Nazism and communism”.

This serious ”righting” of the language is obviously, to a certain extent, a result of the false symmetry between the moderate Left and the brownish, much more radical Right associated with Korwin-Mikke and the neo-fascists from the National Movement (Ruch Narodowy) created by media in their pathetic pursuit of a sort of wrongly understood incisiveness that translates into high ratings.

[quote align=’left’]On various fronts and levels. It imposed its conceptual framework, interpretations and beliefs.[/quote]The declared enemies of democracy participating on equal terms in democratic public debate have sown and validated some deeply anti-democratic ideas within it. The set of views represented by them is not considered shameful anymore, but it keeps gaining popularity and enjoys acceptance. Thus, the swastika painted on the wall in Bialystok was recognised as a an Indian symbol of happiness, prof. Chazan who used to contest and break the law for the sake of ‘higher values’ did not suffer any consequences (in turn, he is a frequent visitor to media) and the city of Poznan surrendered in the face of an extortion performed by the darkest fraction of the Church and a bunch of hooligans. The shift in the language has encouraged certain right-wing groups to act in a way that not so long ago was considered unthinkable.

The attempt to recognize the sources of rightist views and beliefs throughout the 25 years of Poland’s transformation complements and deepens this explanation. It is rightly indicated that their emergence should be attributed to the priorities and educational policies (in which egoism and mistrust appear as implicit rules) of the Polish education system. It is also reasonably claimed that this may be a consequence of the 25 year-long flirt of the State with the Church. Yet much as this explanation, similarly to the preceding one, may be legitimate, it remains insufficient. Can Poland’s transformation serve also as an explanation of the rise in rightist sentiments in Europe?

What bonds the European far Right, which is on the rise these days, are not (surprise!) the views on current economic situation. The immediate economic affairs are no longer the ultimate indicator of the side occupied on the political stage. Today (I mean “broad today”), the crucial factor is the way of defining community (who belongs to it), establishing the relations of power within it (who rules it) and outlining its boundaries (whose interests it considers). As for this, Polish far right organisations do not differ much from the British, French, Hungarian, Finnish, Swedish, Danish, Greek, Austrian or Italian ones.

In terms of the views on economy the Polish Congress of the New Right (Kongres Nowej Prawicy) radically differs from the French National Front and the British United Kingdom Independence Party from the Hungarian Jobbik, but as far as the mechanism of creating the community is concerned, the similarities are quite obvious. The shift towards an early-modern understanding of the concept of nation, xenophobia and exclusion of the common Other (e.g. Muslims and immigrants), commitment to “traditional values” (and it does not matter that French traditional values differ from Polish ones), cultural conservatism is a common set belonging to various European right-wing organisations that remain, in a way, alike. Focused on the local problems, we fail to notice that in the mythologised Western Europe things sometimes go wrong too. Busy being ashamed of Poland and preoccupied with our absurd war on gender and sexual education, we overlooked the fact that simultaneously a similar war was going on…in France.

This is reflected by (not very surprising in this view) the results of the recent European Parliament election. The ghost of nationalism and xenophobia haunts not only Poland, but Europe as a whole. It is our common problem, a European problem. That is why we cannot consider it as if it was about separate affairs in particular countries (replicating this way the rightist view). Thus the cancellation of the “Golgotha Picnic” in Poznan has as much to do with the burning of the Warsaw rainbow as with the idea of building Roma camps in Hungary, anti-Muslim behaviours in France or (I do not exaggerate) the murder of the left-leaning rapper Pavlos Fyssas in Greece performed by the members of a nationalist party Golden Dawn. And also obviously with the attacks on Poles in Britain.

Considering the cancellation of Rodrigo Garcia’s show in this context may help us notice the huge scale of the problem we are facing. Repeating that Poland remains a sort of European reactionary circles is just taking comfort. Obviously, in Poland things are going, in a way, „worse”, because unlike other old European countries, we did not manage to create strong state institutions and citizenship yet. Alright. Try to tell this the immigrants beaten up in London and Paris. It is not time for discussion on where is worse. Because here is just very bad. Here in Europe.

As my partner is French and as I “work in culture,” I consequently spend a lot of time in so called “international environment”. The strong anxiety and feeling that “something is coming to an end” has never been a common denominator of conversations with citizens of Poland, France, Britain, Germany, or, simply put, Europe. And a shared conviction that indignant open letters have ceased to work and collective displays of support do not seem to benefit anyone, but the coteries that initiated them.

I hear people say that if nothing changes, emigration will be the only solution. But out of Europe. There may also be another way out. Out on the streets. But in whole Europe. That’s how it goes.