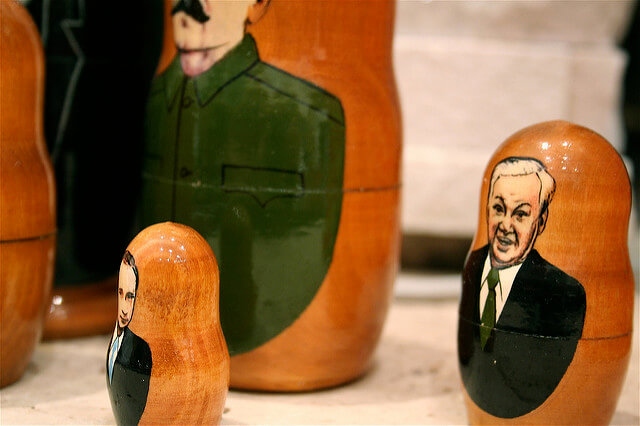 I was surrounded by a group of
polite and sympathetic people
who were slowly and threateningly closing in.
Popular saying

It appears that Belarus is slowly drifting towards the West and away from Russia. Evidence in favour of this observation grows by the day: expert opinion, results of independent opinion polls, intensive contact between Belarus’s Ministry of International Affairs and the European Union, and multiple groups working on co-operation between Belarus and various EU countries and departments.

A classic playwright, Anton Chekhov, once shrewdly noted, ‘One must not put a loaded rifle on the stage if no one is thinking of firing it’. For the second decade in a row Russia has been holding Belarus tight in its brotherly arms – an embrace which Alexander Lukashenko recently enthusiastically tried to break. Pulling out of their big brother’s hug is not an easy task for Belarus; Russia has got four rather convincing arguments that effectively form their instruments of control over the country.

What will happen if Russia decides to apply all of them at once?

Since the late 1990s Belarus has been receiving regular subsidies from the Russian Federation. The subsidies are estimated at about 10 billion US dollars annually. They take a variety of forms – direct investments, intergovernmental credits, reduced rates on fuel, etc. – but the amount of money provided from year to year is almost constant.

Moreover, Russian subsidies have become such an integral part of Belarus’s economy and of the state budget that maintaining preferential economic treatment and reduced energy prices from Russia has become the main job of one of the Prime Minister’s deputies, Vladimir Semashko.

Belarus’s trade is also oriented towards Russia. Although it should be noted that commodity circulation decreased in the recent years, this is partly due to the situation on the global oil market. In 2015, goods supply to Russia had reduced by a third: in 2014 the trade flow between the two countries was valued at 35 billion US dollars whereas in 2015 this number was only 25 billion US dollars.

The main foreign policy tasks of Belarus are determined by the economic situation, more specifically by the answer to the following question: “who exactly will provide us with 10 billion US dollars of investment annually?”. Belarus is ready to accept not only money, but also food, fuel, reduced rates, benefits, nuclear power plants, etc. There is no domestic resource that could be used to patch the hole in the Belarusian economy.

Thus the first conclusion is unfavourable.

The economic independence of Belarus is a myth, it is non-existent.

The second instrument: the effect of Russian media on Belarusian public opinion.

The Belarusian Analytical Workroom, headed by Andrei Vardomatsky, presented findings in Warsaw of their research regarding the influence of the Russian media on viewers in post-Soviet countries, including Belarus. According to this research, 73.1% of the respondents from Belarus responded in December 2014 that they trusted Russian media (to varying degrees). This means that Russia shapes (or at least significantly influences) public opinion in Belarus. This also means that politically Russia can promote or destroy any politician of their choice, including Alexander Lukashenko.

The Independent Institute of Socio-Economic and Political Studies, another independent public opinion poll agency in Belarus, conducted a study in June 2016. Their research demonstrated that 33.6% of the respondents were ready to take the side of Russia should an armed conflict break out between the Russian Federation and the West on the territory of Belarus. Three times less people – 13.4% – were ready to stand up for the West. Moreover, 26.1% of Belarusians support Russia as a protector against potential aggression from NATO. It feels like a miracle that, despite the Russian media’s influence, 10.6% of respondents in Belarus supported NATO.

Another interesting feature demonstrated by the IISEPS research was that young people tended to distance themselves from this geopolitical confrontation and tried not to take sides. Another correlation was observed by experts: the older the respondents were, the higher was the level of their emotional and mental involvement in the conflict in general and on the side of Russia in particular.

Thus the second conclusion is unfavourable.

Public opinion in Belarus is shaped by Vladimir Putin, not Alexander Lukashenko.

This means that in the event of a serious conflict between Belarus and the Russian Federation, the majority may not necessarily be on Lukashenko’s side.

The third instrument: Belarus’s non-profit organizations have a whiff of something Russian about them.

There is an unprecedented outburst of activity among various organizations previously in a state of hibernation in Belarus. There are Cossack organizations, unions of Afghan war veterans, Orthodox camps for the youth, patriotic military clubs, you name it. The Russian-speaking social network  ‘Odnoklassniki’ is full of such groups and the number of their subscribers is estimated in the thousands if not in several tens of thousands. A peculiar feature of these groups is that often they are headed by individuals with battle experience in the past. Why have they become so active today?

The way the state has recently treated Afghan war vets was rather unfair: the veterans lost their well-deserved benefits after an infamous social reform, nobody on the state level was running any rehabilitation programs for them as individuals with traumatic war experience; no adaptation schemes were offered to help their re-socialisation. In other words, nobody cared about how these people were supposed to return to a peaceful life. As a result, the veterans turned into time bombs that the Belarusian state never defused. When these bombs will go off – nobody knows.

Moreover, there is an emerging group of new ‘veterans’: vets of the Donbass war. These are people who in the course of the last two years went to the Donbass (Ukraine) to participate in the ongoing armed conflict between Ukraine and Russia. Some of them fought on the side of Ukraine, some – on the side of Russia. People who killed in Ukraine are coming back to Belarus. Add to this that there is no actual border between Belarus and Russia and anyone could (hypothetically) bring weapons across the border. Now, to have a group of people who know how to use arms, unsupported by their own state and society, is to have an unpredictable force that, in case of social unrest, may be employed to an equally unpredictable effect.

Thus the third conclusion is unfavourable.

Any manifestation of mass protest or political rally attracts all sorts of individuals. This means that the above mentioned groups will inevitably be involved too, possibly causing armed conflicts and confrontation.

The fourth instrument: defence and law-enforcement agencies in Belarus have a Russian whiff about them, too. (According to the information from the website chinovniki.info).

Military and security services – siloviki – are a very influential and important group. In the event of a coup, revolution, uprising, or confrontation with a neighboring country their decision might have the most determining effect on the way things go. Fire or hold fire?

Upon closer examination, a large number of Belarus’s siloviki have a Russian background. Let us start with the Defence Ministry of Belarus and its leaders. The Minister of Defence, Andrei Ravkov, graduated with honours from the Moscow Higher Combined Arms Command School, later he graduated from the Russian General Staff Academy. All of his four deputies studied in Russia; two of them were citizens of the Russian Federation by birth.

The next logical place to look is at the leaders of the various military branches. There are twelve such leaders in total. Eleven of them studied military science in the Russian Federation at institutions such as the Gagarin Air Force Academy, the Military Academy of the General Staff of the Armed Forces of Russia, the Khroulyov Military Academy of Logistics of the Ministry of Defence of the Russian Federation. By the way, three of the above mentioned leaders are Russian citizens by birth. The list could go on and this trend remains evident in other areas of siloviki leadership.

I would like to stress that these are people who are permitted to carry guns. Their decision regarding whom to support in the event of confrontation will determine the outcome of the conflict. Whose side will these people take in case of a conflict between Russia and Belarus? Unknown.

Thus the fourth conclusion is unfavourable: nobody knows what the Belarus(s)ian siloviki will do should disagreements between Russia and Belarus escalate into a serious conflict.

Even Alexander Lukashenko does not know. Or does he?

It will be intriguing to see whether in the coming years Alexander Lukashenko will be able to produce an ‘antidote’ to these instruments, or whether he will agree to maintain the role of puppet.

As for the European Union, it might be useful to keep in mind that if a dog on a leash sniffs at your hand, it does not mean that it is ready to move to your house with its own collar, leash, and kennel. It only means that the owner of the dog hasn’t yanked on the leash. Yet. What if he does?

Olga Karatch
Olga Karatch is one of the most active Belarusian dissidents and is the founder and director of the civil rights movement “Nash Dom”, or “Our House”.
> see other articles <