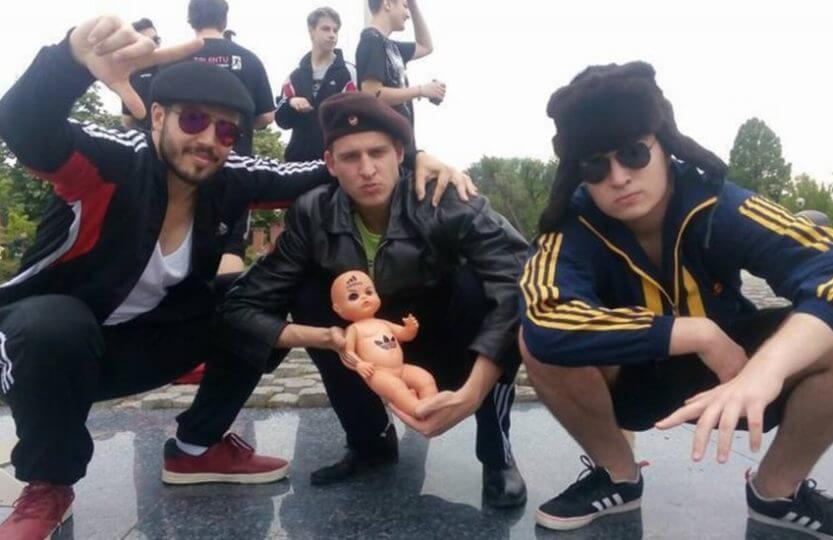 For a long time, we played at being the West without major success, so now it’s time to turn everything around and make the West imitate us. That is more or less the message of the slowly but surely growing ironic movement around the Facebook page Squatting Slavs in Tracksuits. Many prominent figures of Czech post-1989 life like to reminisce about their first trip over the borders. In Austria, they recall, they were met with sparklingly sterile toilets at the first petrol station, which for them became the symbol of Western society. Standing over a clean Austrian urinal, any post-communist could suddenly feel like Havel. We all wanted orderly and clean loos – as well as democracy. It’s not our fault that the image of the typical East European on the mental map of the average English, French, or German person shrunk to a backward boor in a track suit with a heavy Slavic accent, who at best cleans these dreamt-of toilets.

As history has shown us several times already, the best way to fight scorn and disrespect is to turn them to your advantage.

Even with the passage of time and the permanent race to catch up with the West, not much has changed. Rather the opposite, as the recent British campaign before the Brexit referendum shows. It’s time to strike back. The people behind Squatting Slavs in Tracksuits have decided to take a different approach and appropriated the caricatured image of the average Slav. His basic attributes are a sporty nylon jacket (preferably Adidas), hard alcohol (preferably homemade), monotonous dance music (preferably hardbass) and the by now iconic squat. How does a typical Slav spend his free time? Usually, he drink-drives, squats with his gopniks in front of his favourite pub for hours, beats his wife, settles his accounts with a weaker opponent (whom he usually outnumbers with his friends), and spends his evenings playing Counter Strike and partying with his boys on the monkey bars outside his tower block to the sounds of hardbass, with occasional fist fights to boot. Simply put, the East with all the trimmings.

In the first place, the activities of Squatting Slavs in Tracksuits are of course a parody of East European masculinity, as represented by Polish dresiarze, and Balkan, Ukrainian, and Russian street thugs from housing estates, who became an emblem of the worst that these Asianized Slavs can offer to Europe. As history has shown us several times already, the best way to fight scorn and disrespect is to turn them to your advantage. A group of young Romanians told themselves that they would no longer pretend to be something better and be embarrassed for their backward fellow citizens, but on the contrary –in jest and with exaggeration – accepted their identity with relief.

The page Squatting Slavs in Tracksuits was founded in 2014 by the then seventeen-year-old Alexandru Matesan from Bucharest and today it is followed by more than 200 000 people. Originally a meme generator, the community around the page has transformed into a movement organizing meetings and manifestations of squatting Slavs. One such event will even soon take place in Prague. But the phenomenon also has an anthropological dimension. As Alexandru Matesan pointed out in an interview for Paper Mag, Slavic squatting has a long tradition. Most often, it refers back to tsarist Russia, where it was associated with convicts. One theory posits that while being transported to prison, guards used to force prisoners to move while squatting so as to have greater control over them as well as humiliating them. But the prisoners liked to remain in a squatting position even behind bars, as prisons simply did not offer any greater luxury. And it is also the lowest strata of Russian society – outcasts, tramps, hooligans – that another key term of the movement comes from: gopnik. All true Slavs are gopniks and address each other as such. This term was originally a slur aimed at so-called social cases, i.e. those reliant on the services of tsarist charity, known by the acronym of GOP (Gorodskoye Obshchestvo Prizreniya). Later, this term became a more general insult aimed at socially and culturally disadvantaged individuals from the peripheries of larger Russian and East European cities, who are often characterized by criminal activity. It is basically an East European variant of the British term chavs or white trash in general. Today’s squatting Slavs are obviously reacting to East European neo-Nazis and football hooligans mainly by caricaturing their culture of violence and omnipresent hardbass beats.

That the point is mockery and not poorly concealed admiration can be seen for instance in the video How to be Real East European Man. Squatting Slavs don’t dream about pogroms against Jews or about killing homosexuals, but are rather waiting for a call from their babushka and an invitation to drink strawberry kompot.

The phenomenon of Slavicism has also taken root in the biggest East European community in Western Europe – in Great Britain. The best know “Slav” is probably the youtuber and comedian of Croatian origin David Vujanić. He was born in the Croatian city of Knin, notorious for its disputes between ethnic Serbs and Croatians, which in the 1990s became more or less the trigger for the Yugoslav war. It was because of the war that Vujanić’s family relocated to the UK and Vujanić is today a proud citizen of the well-known multi-ethnic neighbourhood of Tottenham. He is a sharp critic of the rise of British xenophobia against immigrants from Eastern Europe, as seen for instance in his diatribe against Daily Mail editor Katie Hopkins in a television debate before the referendum on Britain’s exit from the EU.

Squatting Slavs don’t dream about pogroms against Jews or about killing homosexuals, but are rather waiting for a call from their babushka and an invitation to drink strawberry kompot.

Last year, a track by the Slav Squat project ridiculing Nigel Farage and UKIP’s anti-immigrant rhetoric also circulated online. In the video, East Europeans in classic tracksuits and nylon jackets take the jobs and women of peaceful Londoners and with their ostentatious bad taste, they corrode good British manners. Vujanić’s parody of the American rapper Drake’s track Hotline Bling called Immigrant Bling is similar. Instead of the jilted lover calling Drake in the original video, Vujanić awaits a phone call from a Briton in trouble, who will let him fix his sink or at least polish his car for a laughable fee.

The growing popularity of David Vujanić shows that East European sarcasm can turn humiliation into an advantage, and his cooperation with British grime rappers Stromzy, JME, or Big Narstie sets the situation of East European immigrants in Britain where it always has been: within a community of African, Arab, Caribbean, and Asian migrants, who are seeking a better and more dignified life in the UK. And the fact that legends of British football such as Gary Lineker, Rio Ferdinand, or David Beckham come to chat and play PlayStation in his talk-show FIFA and Chill  suggests that in order to gain respect and recognition, self-deprecating humour pointing to East European oddities can be more useful than efforts to adapt or endless attempts to catch up with the end of the peloton.

This text was originally published on A2larm.cz