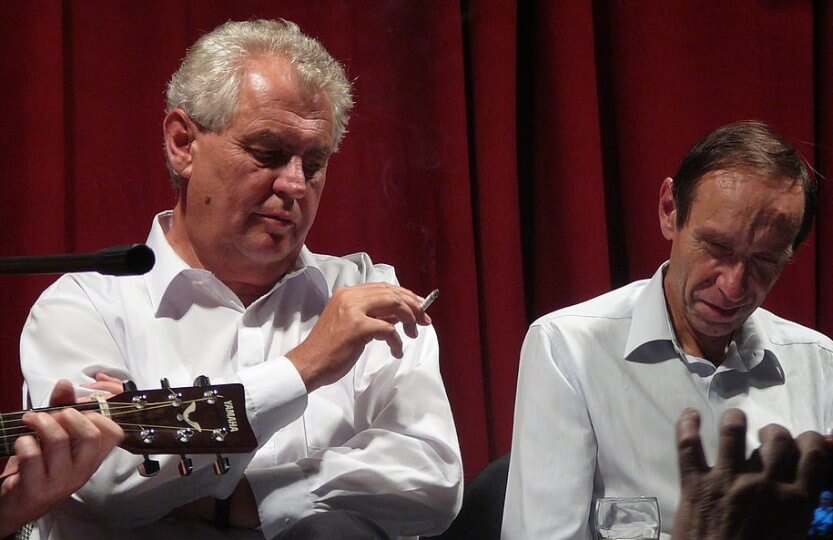 Two weeks ago, Czech president Miloš Zeman welcomed a delegation from the People’s Republic of China, including president Xi Jinping. The visit of the political representatives of authoritarian China sparked protests from Czech citizens, who under the influence of the anti-communist legacy of Václav Havel regularly decorate the country with the flags of independent Tibet. Furthermore, liberal groups accuse Zeman of authoritarian tendencies. During his visit to China, the former member of the Czech Social Democrats and “people’s president” Miloš Zeman admired the ability of the Chinese leadership to “stabilize society”. The leader of the liberal-conservative party TOP 09, Miroslav Kalousek, became the most visible figure of the anti-Chinese protests when he attempted to cross a police cordon with a Tibetan flag. Kalousek, who held the position of finance minister in the hated previous right-wing government, has become a symbol of corruption in the Czech Republic – the sentence “everything is the fault of Kalousek” could at one point be heard even in everyday conversations about the weather. Photos of this man – who would like to consider himself the leader of the democratic resistance against the authoritarian, Islamophobic president – heading the protests, showed how difficult it will be to find a rival candidate to Miloš Zeman. The wait is on not for Zeman’s political death, but for the moment when this democratically elected ruler dies biologically. No one has come up with anything better so far.

A long period of sobering up

The wait is on not for Zeman’s political death, but for the moment when this democratically elected ruler dies biologically. No one has come up with anything better so far.

Zeman has interpreted the derided role of wreath-layer as that of the chief state master of ceremonies, who defines himself as the symbol of the nation. And a very active symbol at that. During his speech to the police forces on 12 April, in which he expressed thanks for their intervention against protesters on 17 November 2015, as well as during the recent visit of the Chinese delegation, he showed the limits to which a meeting with the security forces can be pushed. In his short speech, Zeman named his enemies, in particular the symbol of corruption, Miroslav Kalousek, and next to him the autonomous centre Klinika, which for many people represents an alternative to the present system. In Zeman’s world, corrupt politicians stand next to alternative activists from Klinika, which was attacked with flammables and stones by masked attackers, while the police, whom Zeman was thanking, was unable to prevent the attack, nor apprehend the perpetrators.

Zeman has enriched the economic conflict of Left vs Right. In addition to the Left’s rhetoric of critiquing (certain) economic realities, he attacks everything that he considers depraved in the contemporary West – and which in his view is being uncritically imported into the Czech Republic by the decadent “Prague coffee house”, a term for his ideological opponents that has become part of the Czech vocabulary. He sustains his popularity through a permanent presence in the media, where he takes on the role of a militant defender of national values and ordinary people. It is in their name that he then attacks selected members of the elites. He takes swipes at investor Zdeněk Bakala, but he goes on trips to China with billionaire Petr Kellner; he mocks journalists, but regularly lets himself be courted by devote media lackeys; he fights with Prime Minister Sobotka, but says nothing against magnate and finance minister in one person, Andrej Babiš. He does not hesitate to laugh at those on benefits, but defends the tax dodging of tennis player Petra Kvitová.

In the series Louie, a middle-aged stand-up comedian has a meeting with his financial advisor. He wants to buy a house in Brooklyn for himself and his two daughters worth several million dollars and is looking to check the state of his savings. “Louie, your savings are currently seven thousand dollars. You have less than ten times less one mortgage repayment.” “Only seven thousand? What about… Obama?” One of America’s most famous comedians Louie C.K. is of course making fun of the absurd hopes that Americans placed in Barack Obama. They believed that their lives would go only upwards and they would come closer to their dreams. Many of Zeman’s supporters have long since seen through this Obama-style promise – but it is not the American president who used to stand on their pedestal, but former Czech president Václav Havel.

Enough uncertainty for all

The last post-1989 remnants of faith in a more just society have gradually evaporated and have now turned into nihilistic cynicism, “hopeless, but ours”. In his great presidential show, Zeman pokes fun at arbitrary attitudes and lifestyles that do not conform to a preference for “sausage and beer” – and he does so with the ease of a well-established stand-up comedian. Temperance, vegetarianism, not smoking – all this Zeman mocks with gusto and prides himself that despite his alcoholism and smoking habit, he still has the “prostate of a virgin”. He dons the mask of a vivacious cheery boor and ridicules those who would like to improve their regimen, if nothing else. Zeman doesn’t give any hope to anyone – he only fosters hopelessness.

In his great presidential show, Zeman pokes fun at arbitrary attitudes and lifestyles that do not conform to a preference for “sausage and beer” – and he does so with the ease of a well-established stand-up comedian.

This does not necessarily mean that the President’s supporters come from lower social strata and struggle with an unsatisfactory financial situation. As a recent survey of Aktualne.cz showed (similarly to an analytical text of the weekly Der Spiegel about the voters of the Alternative for Germany party), a large proportion of protests votes today comes from secondary-school or university-educated and relatively well-to-do people from the middle classes, who are unhappy with their social status. They are united by a forceful refusal of helping refugees from war-torn regions, but also the feeling that their opinions do not have any representation on the party-political scene. They are convinced that were the conditions different, they would be able to decide about the future of their country.

Zeman’s merry dances circle not only around economic, but mainly cultural and social inequalities, which are part and parcel of any system. The fact that so many Czechs today are contemptuous of the post-1989 liberal-democratic developments is symptomatic of a time in which the social consensus about the causes, and, in particular, the legitimacy of existing inequalities has completely fallen apart. But with it, social unity has also disappeared. What remains are social groups who understand each other’s values only as a means to achieving certain political and economic goals. If certain theorists have labelled the era of post-communism, with its efforts to imitate the dreamt-of West so faithfully, as the age of children, we could describe the present as an age of teenage revolt. We are discovering cracks in the idealized Western models we have looked up to. The systems we were simply meant to accept emerged from decade-long social struggles that Czech society never experienced. That is why for Czechs, terms such as “sexual minority rights”, “anti-racism”, or even “feminism” do not connote those who for years fought for them in the streets, but merely a “dictate from Brussels”. Of course, even in the West there is much aversion to these concepts, which are felt to be the inventions of theorists cut off from everyday life. But in post-communist countries, this aversion is intensified by nostalgia for the previous regime, only strengthened by the disappointment brought by recent years.

A telling example of the above-mentioned Czech teenage revolt is the current public debate on improving diplomatic relations with the People’s Republic of China. The visit of the Chinese president in the Czech Republic did not in any way go beyond current international standards. Cooperation with China is a feature of a changing map of international trade and the transition from the bipolar world of the Cold War to a multilateral world of global capitalism. Zeman is only following in the footsteps of his political opponents Kalousek and former PM Petr Nečas, under whom, surprisingly, the influence of the East on the Czech economy only grew.

Defenders of Zeman’s foreign policy often ask in what ways working with China will be any worse than already existing cooperations. But we should in fact be asking in what ways it will be better. If the refusal of any kind of relations with China is associated with the children’s age of post-communism, which wanted to be more Western than the West, then the current teenage revolt against the “Havelian” conception of foreign policy reveals a loss of national identity in the age of global capitalism. Instead of a confident stance coming from a specifically Czech position in world politics, here we are dealing simply with a refusal reminiscent of a teenage brat, without any concrete strategy behind it.

When the Czech president goes on Chinese television and speaks about how his country has finally freed itself from its subjugation to the USA and the European Union, we should be worried. Somewhere in the background to these statements, we hear a reference to the well-known declaration of Hungarian prime minister Viktor Orbán about building an illiberal state. In such a vision, human, social, and labour rights are sacrificed for the greater good of society – in the name of maintaining competitiveness, productivity, and economic growth. It is a disciplining with fascist overtones for the purposes of a neoliberal market. For it to be implemented in the Czech Republic, Russian and Chinese investments are key, because they enable the ruling class to even further free themselves of political correctness, from maintaining dignified working conditions, and at least an elementary respect for human rights. Under Chinese and Russian supervision, they can calmly work on transforming the Czech Republic into a third-world economy. Being the West’s cheap labour assembly line wasn’t enough? Here’s your sweatshop!

Leaders like Zeman, Orbán, or Kaczyński do not strive for the greater participation of citizens in the decision-making process, nor do they want them be markedly better off. They should be happy that they have jobs and not benefits. Zeman turns to those people who had often worked hard and diligently for an un-European amount of money on European assembly lines (which Zeman’s famous policy of incentives for foreign investors helped to create). Today, he thanks them for their self-sacrificing work and at the same time is constantly looking for ways in which to sacrifice them once again for the greater good of their country. In short, Zeman is a benevolent slave-owner, whose kind words had long been awaited by a large part of Czech society. He pats his devotees on the head, assures them he knows about their existence, and quickly turns on the assembly line once again. So little is needed for a politician to win the hearts of the nation. But so far, despite the bar being set so low, there is no suitable candidate to beat Zeman. That doesn’t mean such a person might not appear. It doesn’t take much.

A version of this article originally appeared on A2larm.cz.