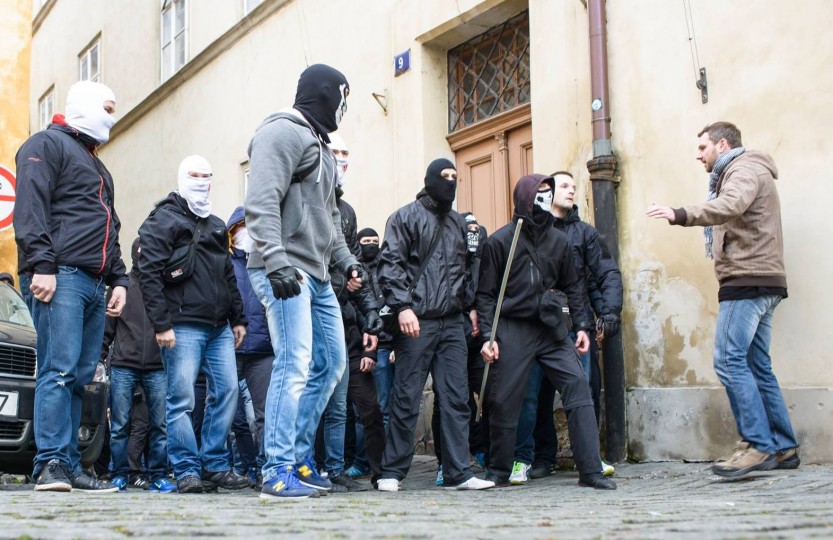 Neonazis attacked Klinika. One person was hurt, others were in danger. Activists assume there’s a link between islamophobic demonstrations that were held today and visited by thousands of people. Klinika collective is not afraid and is going to continue its activities. Klinika also calls on people attending such demonstrations to realize whom they are supporting by doing that.

On Saturday February 6th, after demonstrations of Block against Islam (BPI), Pegida and nationalists lead by Adam B. Bartoš, a group of ~20 neonazi hooligans attacked Autonomous Social Center Klinika in the Žižkov neighborhood of Prague. It seems that the attack was held by the same group that attacked the pro-refugee demonstration “Solidarity without borders” with cobblestones and iron bars, and then people returning from the demonstration on Main Railway Station (Hlavní nádraží). The attack happened approximately 30 minutes after that group took a tram from Main Railway Station to Žižkov.

They shouted: “Shut up, you Arab” at a neighbour who noticed their attack and threw stones and flares that set a part of the Klinika Café to fire. There were about 20 people in the building at the moment of the attack, stones were thrown to the rooms occupied by people. One man was hospitalized with a head injury head, some other inhaled smoke.

We can’t but notice the obvious connection between today’s violence and aggressive moods that are being awakened in the society by islamophobes and xenophobic politicians.

We want to highlight the fact that this wasn’t the first attack when those who were showing their solidarity with people running away from their country were targeted. Last week, a man of muslim confession, known for helping refugees, was stabbed in the Vršovice neighborhood (Prague). It is striking that the Police wasn’t able to capture the group that attacked the demonstration before, that no one of them was arrested and that they were moving through the city freely throughout the whole the day. “We are not going to be afraid because of the violence or threats. We are going to continue our solidarity actions and spread the free alternative spaces. The agression of Czech nationalists seems just like the agression of fundamentalistic islamic groups whom they claim to fight,” Jakub Ort, member of the Klinika collective, comments on the situation.