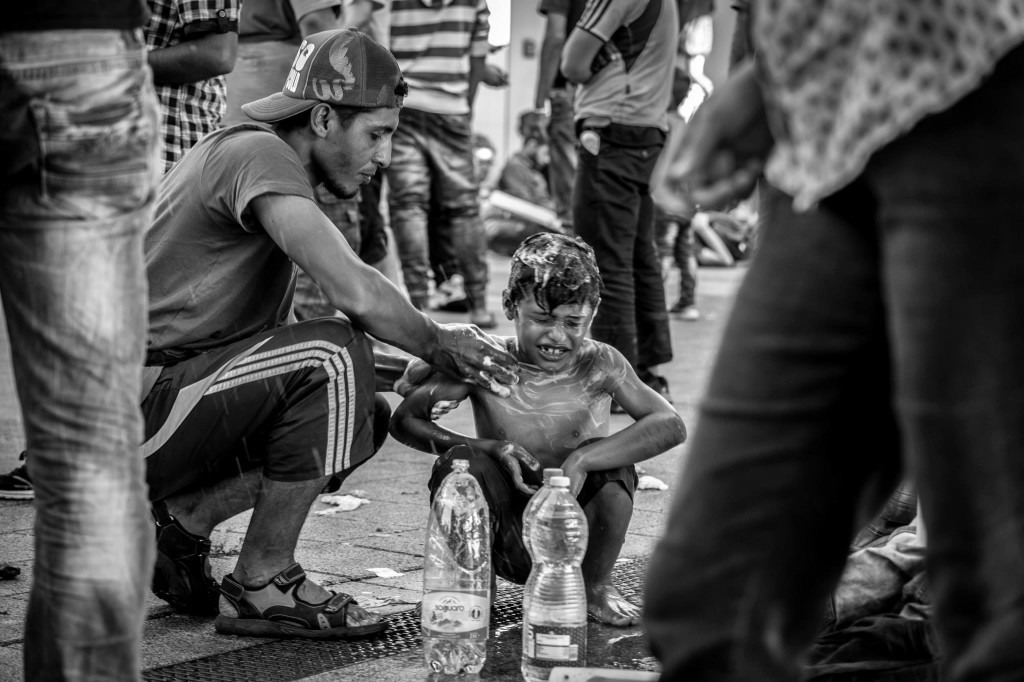 When on the evening of September 14, after previous regional agreement on the issue, Visegrád countries torpedoed the implementation of a new, cooperative refugee policy – the distribution of about 120 thousand penniless people, fleeing from war, across the EU – it seems easy to harken back to the old East-West opposition, where Easterners are portrayed as intolerant, self-contained and anti-democratic people. This picture can be reinforced by the fact that Baltic countries, Romania and Bulgaria are also firmly against the idea of giving shelter to refugees. But this division is misleading and false as it always has been. It is enough to take a look at the facts – the Danish government’s declarations that were very alike those of their Hungarian colleagues’; anti-refugee atrocities in Germany; the UK’s firm anti-quota position – to see that the lack of solidarity towards refugees is not an Eastern European specialty.

And just like one cannot judge all of German society on the basis of violent far-right groups in the streets of German cities, Robert Fico’s or Viktor Orbán’s sentences should also not trigger judgement about whole societies. All the more so since thousands of Hungarian people have shown the most humane solidarity towards refugees in the past months.

Our leaders are too lazy to admit that they have failed to bring us the promised advantages of the EU.

At the same time, it is also true that sociological research has shown Eastern European societies to be much more xenophobic than most Western European ones. According to Hungarian social research institute Tárki’s data from July this year, 39 percent of the adult population of Hungary is highly xenophobic.

Social research institute Republikon found, also this summer, that the proportion of people considering refugees a potential threat to Hungary and thus claiming they should not be allowed inside the country is a majority attitude among voters of every political party in Hungary. This research showed that 66% of Hungarian society holds anti-migrant attitudes. These ratios are much lower in Western European countries, and opinions regarding refugees are also much more balanced, even in countries like the UK where the majority of people are against the country’s accepting refugees.

Unfortunately, polls alone, without any context, are not very informative; the only thing that can be clearly seen from this data is that the societies of both Western and Eastern European member states are strongly divided regarding their attitudes toward refugees, even though the latter tend to point much more in a negative direction.

But why do the prime ministers of most Eastern European member states feel that they can overtly take a non-solidaric stand, or rather: that they have to do so, even in times when our continent is flooded with the most horrifying images of human suffering?

The answer is most likely to be found in the shared experience of the region.

Has life become better and yet worse?

Even though after the fall of state socialism, as well as after joining the EU, the standard of living in the region has undoubtedly improved, the deeply rooted wishes of Eastern Europeans to reach the quality of life of the Western countries have never been fulfilled. The Western quality of life today is at least as unreachable for us now as it was 10 years ago. The resentment over this is not alleviated anymore by the fact that billions of Euros have been spent on innumerable development projects in the region, even in the smallest countryside villages.  The majority of citizens have realized during the period since their countries joined the EU that the present European economic structure is not designed to, nor capable of, raising living standards of the region to the Western level.

Open borders proved to be the EU’s most important achievement; millions of Eastern Europeans chose the same option refugees are choosing now: they packed up all they had and hit the road in hope of a better future. However, the open borders and free movement of people also pointed out that lurking behind the European slogans, there are British and French governments agitating against Polish or Hungarian immigrants and French, Spanish and Italian press and authorities stigmatizing Romanian guest workers.

In the meantime, the majority of post-1990 transitions lead to the breakdown of existing patterns and networks of solidarity. As a result of the “streamlining” that followed privatization, hundreds of thousands of workers lost their jobs, and solidarity was replaced by the wish that instead of me, they’d choose my colleague of many years to be fired. The push to achieve a competitive edge by any means is generally not very beneficial for the survival of networks of solidarity. If you have to constantly fight for fewer jobs than there are job seekers, you have little time left to feel solidarity towards your fellow humans. Especially if the dominant narratives declare that instead of the lack of jobs created by an economic system, it is the individual who is responsible for their own success/failure.

These are the contradictions brought about by the big transitions of the last 25 years, experienced, to varying degrees, by all Eastern European countries. Prosperity has undeniably increased, but catching up with the West is still light years away and, even more importantly, the distribution of wealth is increasingly unequal. The EU developments might have helped close the gap, yet they are hardly meant to bring about real equality within the Union, since in most cases they fail to take into account the structural disadvantages that Eastern European countries have to cope with. The effectiveness of the subsidies coming from Brussels was also diminished by the fact that political elites lacked a plan for development, and even when they didn’t spend funding in a corrupt way, they still didn’t manage to spend it efficiently. With the opening of the borders, there has been an even slower decrease in inequalities, their existence becoming even more visible, partly due to Western xenophobia. (As for open borders, Romania and Bulgaria still haven’t been granted full admission to the Schengen zone; everyday citizens are still obliged to go through border control if they want to leave the country).

The world and the context in which Eastern European societies have developed in the last 25 years, is definitely not one of solidarity; it is quite the opposite. From this perspective, the lack of solidarity with refugees perhaps becomes more understandable, albeit not defendable. To be more precise, what becomes really clear is that it would be a mistake to speak about an East/West divide in this issue, as the problem isn’t caused by the “Eastern-ness” of East-Europeans – those same attitudes and behavioral patterns vis-à-vis refugees are equally present in the West. The only difference is that the political, economic and social processes and contradictions that weaken solidarity in Europe as a whole are exacerbated and can be felt more harshly in our region.

Solidarity would be the answer

With their anti-refugee policies, East European leaders are missing out on an historic opportunity. Their countries, their societies will not benefit if antagonisms within the EU are aggravated and solidarity between member states decreases even further. To the contrary, leaders should introduce a confident and consistent, if you like, radical solidarity-based programme, in the framework of which refugees’ wishes and Eastern Europeans’ wishes, both of which are aimed at welfare and a better life, can be realized simultaneously.

All that the objections against a quota system achieved was that many member states, albeit symbolically, have started threatening with putting an end to the Schengen system that guarantees free movement within the EU. Border control in Austria and Germany doesn’t mean the end of Schengen, and – contrary to rumours in right-wing media – it also doesn’t mean that these countries aren’t willing to take in more refugees, however, what it does signal is that Austria and Germany are ready to think in terms of an EU that is less unified and also less advantageous to or sympathetic/solidary towards Eastern Europeans.

Dear reader, you might think that we are simply daydreaming here, but we are of course aware of the fact that neither FIDESZ, nor Robert Fico nor the Polish government are willing to introduce a program of radical solidarity. But don’t forget that it isn’t the refugees who are stopping them from doing so. And it also wasn’t the refugees who stopped our dear leaders from stepping up together in the last few years, demanding a bigger EU budget, common policies allowing Eastern wages to catch up with Western ones, a sustainable and just agrarian policy or compensation to stop social dumping. It is possible that they wouldn’t have had the chance to change anything, but the problem is that they didn’t even try.

And now, when our leaders are too lazy to admit that they have failed to bring us the promised advantages of the EU, and when they do everything to conceal the fact that they are building unequal and divided societies, they are making us believe, much like their Western colleagues, that what will turn us into a community and make us strong and successful is keeping “these strangers” out of our countries. They are telling us that we’ll only be safe if we rely on our heavy-handed (but of course also Christian) leaders, because they will fight for our common interests and protect us from danger.

However, safe, successful and strong communities cannot be built upon exclusion, violence and hypocrisy. Maybe top-down party apparatuses, political campaigns and electoral victories can be achieved by such measures, but only as long as there is no real political opposition and the real nature of these policies continues to go unnoticed.