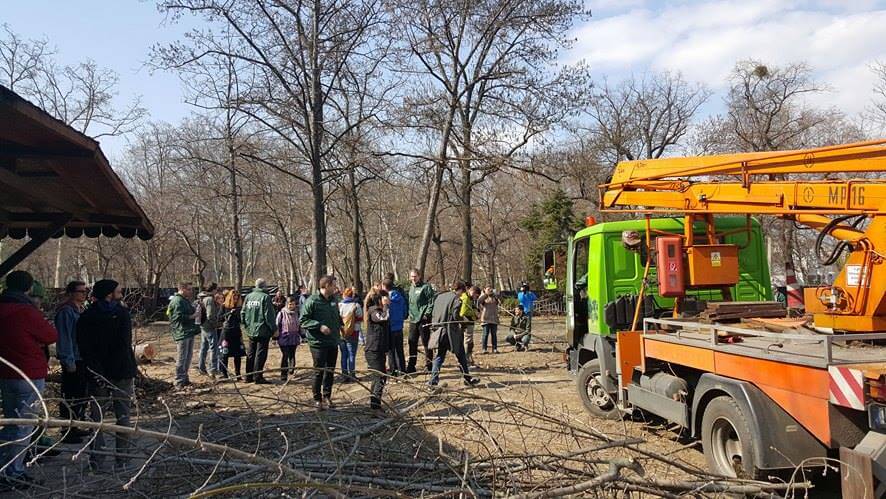 On March 17, the authorities of Budapest began cutting down trees in Városliget, the oldest and largest public park in the city. Eight trees were cut down before local residents and activists from the country’s two green parties, together with the former secretary of state of the governing Fidesz party, stepped in and prevented further destruction. This opposition, moreover, has managed to organize itself, standing guard ever since, and creating cultural programmes for those wishing to protect the park.

The protests against the destruction of the park, and the construction of a so-called Museum District in its place, are often falsely portrayed in the media as no more than a dispute over green space. The underlying issue is that the government has blocked the possibility of holding a local referendum on the project and released fake design plans to misdirect public opinion. It has refused to consult with local residents and to take into account more than 20 thousand signatures on a petition protesting against the plans for the museum district. The conflict is also related to another pet construction project aimed at moving the office of the Prime Minister into the Buda Castle. Above all, this is a question of whether the government can make decisions over peoples’ heads about public space.

The company responsible for the management of the park now claims that no more trees will be cut down, unless they are diseased. Residents and activists, however, are hesitant to believe this promise, and they have every reason to be cautious.

It would be difficult to justify the moving of the National Gallery on the basis of the Prime Minister’s personal whims, so the creation of a museum district provides a smoke screen.

The idea of transforming the public park has double roots. On the one hand, László Baán, the director of the city’s Museum of Fine Arts has long wanted to bring together most of the museums of Budapest in one place – under his own command. But this project could not have been achieved were it not for another project, belonging to Prime Minister Viktor Orbán himself. He has decided that he wishes to move his office into the Buda Castle, thus restoring the Hungarian state to its location before 1944, when the contemporary political elite worked on the Castle hill, and came down to parliament only when it wanted to. During the first Fidesz government between 1998 and 2002, the Sándor Palace situated on the Castle hill was renovated. At the time the PM wished to move in there. However, after losing the election in 2002, the new Social Democratic government scrapped these plans and moved the office of the head of state there.

This time it is not just one building involved, but the entire Castle: Orbán wishes to create an entire government district, with the national bank and several ministries moving in alongside the Prime Minister’s office. This project however requires the institutions currently housed in the Castle, like the Hungarian National Gallery and the Szécheny Library, to be moved somewhere else. It is in this context that the idea of the museum district has come up again. It would be difficult to justify the moving of the National Gallery on the basis of the Prime Minister’s personal whims, so the creation of a museum district provides a smoke screen.

Despite warnings against the destruction of the park and suggestions of alternative locations for the museum district offered by experts, the government has not listened, designing these elaborate plans instead. It ignored the twenty thousand signatures collected by the local CivilZugló association too, and moved to block the initiative to hold a local referendum on the issue. This referendum was blocked a couple of months ago.

And in the meantime it has pulled out all the stops to achieve its aim. It has spent several hundreds of millions of taxpayers’ money to promote the project. It released design plans that were intentionally misleading, failing to show the true scale of the buildings planned in the park. It modified the law concerning Városliget in order to eliminate the legal barriers against the transformation. It redefined the legal category of ‘green areas’ in order to be able to claim that the surface area of green space in the city will not decrease as a result of the project. Despite this, polls show that 70 percent of the population opposes the transformation of the park, and 92 percent would prefer it to remain a public park.

This is a struggle for public space, for the right to the city and the interests of the local community against the personal caprice of those in power.

The proponents of the project claim that the park is in bad shape and that it needs ‘renovation’. This claim is correct, as anybody who has walked around the park in the last few years will know. The park needs serious attention, but it does not necessarily follow that it must be transformed into a museum district. This transformation will mean that the space loses its function as a public park. There would be fewer green areas in the city and those areas that remain would change their function. There would be more tourists and higher prices in Városliget; local residents would gradually be pushed out of the entire space.

In response, the government has proposed yet another expensive cover-up: the creation of a new public park around one of the city’s railway stations, a run-down industrial area. The people trying to protect the largest and oldest public park of Budapest, however, claim that the museum district should be moved there instead.

Whatever the authorities decide to do next, the struggle for Városliget goes on. This is a struggle for public space, for the right to the city and the interests of the local community against the personal caprice of those in power.