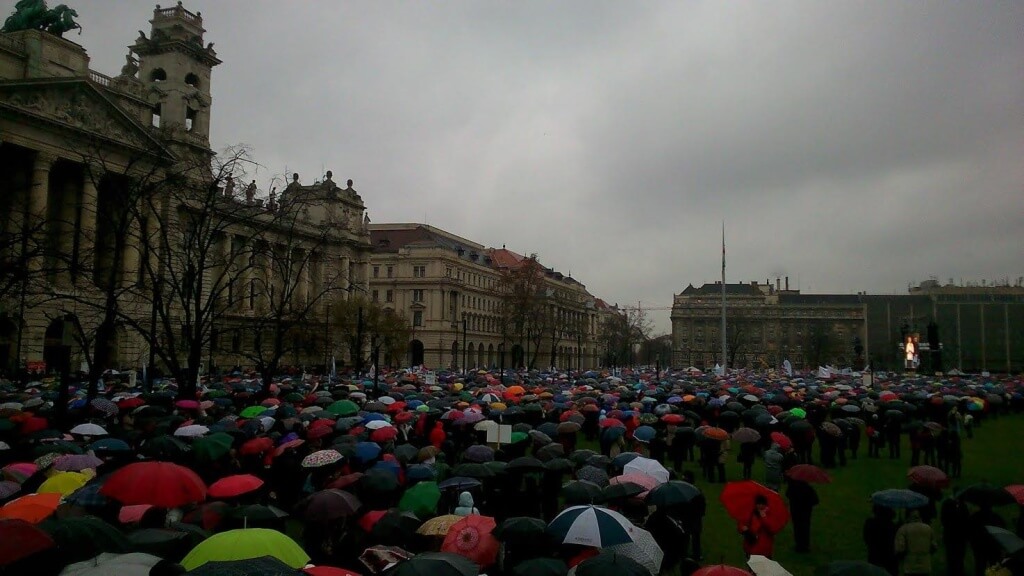 Hungarian teachers are protesting. Last Saturday, a crowd of more than 20,000 people gathered in front of the Parliament to articulate their demands for a comprehensive reform of the educational system and to push the unresponsive government to consider these demands. This was preceded by another wave of demonstrations on 3 February, when thousands of teachers, pupils, and parents went out into the streets of 11 Hungarian towns.

The protesters seek changes in two closely related areas: they point out problematic aspects related both to the quality of the educational process and to the shortcomings of the current educational infrastructure.

The largest demonstration of around 5000 people was held in the Eastern-Hungarian town of Miskolc, making this one of the biggest protest events held outside of the capital since the dawning of the country’s post-communist democracy. The town serves as the epicentre of the teacher’s movement as it was a local high school that sparked the entire wave. In January, the faculty of the Herman Ottó High School in Miskolc released an open letter in which they urged the government to introduce a comprehensive educational reform. The call was quickly joined by other institutions around the country; at present more than 800 schools and 30,000 individuals have signed the petition.

What are the teachers demanding?

The protesters seek changes in two closely related areas: they point out problematic aspects related both to the quality of the educational process and to the shortcomings of the current educational infrastructure.

In what concerns the quality of the educational process, the petitioners point to the fact that since 2010 the number of classes and the size of the curriculum grew drastically. Countering the claims of the government according to which the robust curriculum keeps pupils in competition with their Western fellows, the teachers argue that the current size renders the deepening of knowledge impossible. The teachers are under pressure to tick off every item prescribed by the curriculum, to rush through the materials and renounce every expectation of quality. Which, naturally, makes pupils less competitive. The same is true of the number of classes (on average around 32 per week, but oftentimes reaching 40 or more): this leaves pupils with an unmanageable workload and no free time.

The current conservative government also nationalized the distribution of textbooks, limiting the choice from a previous wide range of different textbooks to merely two – frequently of poor quality and arriving late to the schools due to a poor distribution system.

Huge problems are created also by the highly centralized nature of the educational infrastructure. The Fidesz-government enacted a process of massive centralization, destroying the previous system in which schools belonged to the jurisdiction of local authorities and hence enjoyed a substantial autonomy in both educational and infrastructural decisions. When introducing these changes the government argued that the maintenance of schools represents too big of a burden for local authorities, therefore a centralized body that would fund, manage and coordinate schools should be put in place.

In reality, however, the giant central institution, the so-called KLIK, proved unable to fulfil its functions. Despite the disproportionately huge amount of money poured into it, and increased every year, schools are still accumulating huge debts, they lack funds for the most elementary materials (like chalks or toilet paper) and the payment of salaries runs late. Decision-making powers are taken out of the hands of the directors and vested into a distant central authority unresponsive to local needs and realities. Decision-making, thus, has become extremely lengthy and simple decisions, concerning, for instance, the refurbishment of a school gym, take months to be made.

KLIK is the body appointing school directors – oftentimes against the will of faculty, students, and parents. With no actual powers, no decision-making prerogatives on financial issues, and dependent on the centre, directors become simple transmission belts forcing the central agenda on individual schools.

The workload of teachers has also increased. The number of classes a teacher is obliged to teach grew, and at the same time, payment for overtime work was scrapped. Furthermore, teachers now have to fulfill an absurd amount of administrative tasks, filling in forms, writing reports and evaluating their colleagues.

And here we reach another sensitive point: the question of salaries. In a hypocritical manner the government promised increase, but in fact the salaries of the teachers are currently not indexed to either the rate of inflation or to the national minimum wage. The salary of Hungarian teachers is the lowest among the countries of the OECD, while every year the government spends less and less on education. In the 2008-2012 period the sum spent on education decreased by 25 percent. While in 2003 Hungary spent 5.7 percent of its GDP on education, by 2013 this rate fell to a mere 3.93 percent.

A pivotal element in the teachers’ fight is to force the government into substantial negotiations. So far, however, the cabinet remained inflexible in the face of the protests. Although it held roundtable discussions on the topic, the partners for discussion were carefully picked from subordinated institutions and agencies with often no connection to the field of education. These representatives just regurgitated the message of the government. Of the two largest trade unions representing the teachers – trade unions that are not known for their radicalism, or unwillingness to make even unprincipled deals – one refused to participate in the fake roundtable, and a day after the talks the leader of the other declared his own participation a mistake.

Setting up efficient but accountable structures of representation, and building coalitions with other segments of society will be vital for this initial spark to be sustained.

The Ministry of Human Capacities sacked the secretary of state responsible for primary and secondary education – a symbolic gesture that amounts to nothing, say the protesters. In the meantime senior cabinet members, and the Prime Minister himself made declarations that prove their utter contempt for the plight of the teachers. In an attempt to give the usual spin to yet another action challenging the government, Viktor Orbán claimed that the wave of demonstrations is not coming from the teachers themselves but are fuelled ‘external forces’.

It is not clear what will be the next step of the teachers and for how long this wave of dissent can be sustained. On the one hand, a mobilization on this scale among employees is a rare occasion and unprecedented in the Orbán regime. It has also managed to attract solidarity from people outside the educational system. Cab drivers and public transport employees, health care workers and firemen all expressed their solidarity with the teachers and were present at their demonstrations. Setting up efficient but accountable structures of representation, and building coalitions with other segments of society will be vital for this initial spark to be sustained.

On the other hand, however, the Orbán-government is extremely skilled in suppressing such initiatives. With a combination of force, arrogance, moles, fake conciliatory rhetoric and powerful media spins, Fidesz can be very successful in reframing such conflicts to its own advantage and in taking out the wind of dissenters’ sails. Furthermore, the amendments to labour legislation make strikes practically impossible, thus mutilating any kind of labor empowerment.

High quality education would represent an immense developmental potential for Hungary, as well as other countries in Central and Eastern Europe. Unfortunately, a smart policy of investing in education is contrary to the interrelated logics of the Fidesz government, which are based on the singular drive of plundering state resources and privatizing them for their own clientele, and on global neoliberal capitalism, whose growth model relies on a cheap and vulnerable workforce of the periphery and semi-periphery.

What we can do is support the struggle of, and root for, teachers, pupils and parents in Hungary, as well as Slovakia, where similar protests are taking place these days.

Nóra Diószegi-Horváth and Szilárd István Pap
The authors are editors of the Budapest-based independent platform Kettős Mérce.
> see other articles <