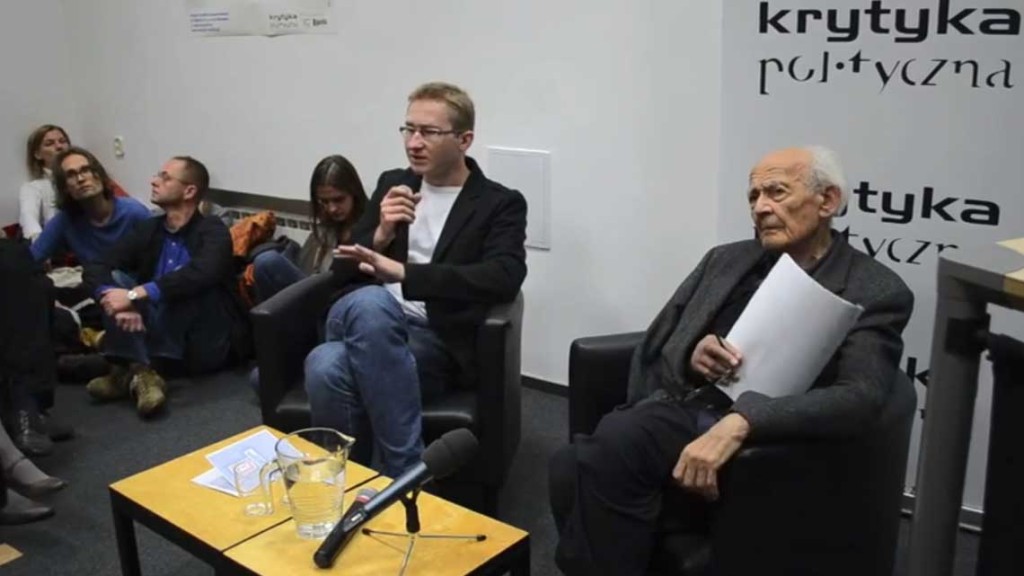 [Krytyka Polityczna seems the exception proving the rule within Leder’s analysis: it is the center of an ever-growing milieu of widely read Polish twenty- and thirtysomethings who have spent the better part of a decade attempting to create a new Polish left unburdened by the legacy of communism and unconnected to mainstream party politics, yet deeply invested in specific issues broadly identifiable with European social democracy.

The journal’s perspective might frequently confound American or Western European readers. It combines social-rights advocacy (for women, the LGBT community, and various religious and ethno-national minority groups) with uncompromising democratic advocacy abroad (including a consistently pro-Ukrainian and anti-Russian line in the context of the current crisis in Ukraine). This is the Polish milieu most responsible in recent years for promoting the writings not only of Gayatri Spivak and Slavoj Zizek, as well as Poland’s own theorists and practitioners of socialism (most notably, Stanislaw Brzozowski in the nineteenth century and Jacek Kuron in the twentieth), but also Poland’s key émigré scholars (such as Zygmunt Bauman) and Anglophone historians (the Oxford professor Timothy Garton Ash and the Yale professors Marci Shore and Timothy Snyder). Krytyka Polityczna offers a hybrid vision of social and political life: a uniquely Polish social democracy promoting Polish historical memory while also seeking to incorporate the most thought-provoking trends in global social theory.

The publishing house’s existence shows that the hold of the waking dream over Polish society is not a choke hold. (One might venture to say that the very possibility of the publication of Leder’s book shows the limitations of his argument.) Nor is Krytyka Polityczna a singular case of class or geographical antagonism—for example, setting youth from upwardly mobile, once-rural families against the scions of families long settled in Krakow or Warsaw. Its journal can claim the extraordinary achievement of squaring dramatically different schools of thought and practice: the Western European “New Left,” American-style democracy promotion, and homegrown Polish—anti-Marxist (and frequently anti-Russian)—socialism.

This combination has yielded certain counterintuitive affinities. For Poland’s new ultranationalists and Smolensk cultists, Krytyka Polityczna symbolizes decadence and alien infiltration. And yet, in many respects, it represents the most direct continuation of the Solidarity movement of 1980–81, whose legacy remains a point of heated debate in Poland. Brzozowski’s anarcho-syndicalism shaped the philosophies of Kuron and his younger friend Adam Michnik, who spent a significant portion of their time—first in prison in the 1980s and then in Polish public life in the 1990s and 2000s—articulating their own practical ethics of social justice, while at the same time navigating the straits that separated the naïve idealism of Western Europe’s soixante-huitards from the practical agenda of democracy-promotion organizations like the National Endowment for Democracy and the Open Society Foundations. Krytyka Polityczna represents an attempt to preserve the best of the legacy of older dissident generations—with whom its relationship is occasionally fraught, though at its core defined by mutual admiration—while attempting to marry Polish national traditions with social justice absent xenophobia, clericalism or political illiberalism.

Krytyka Polityczna’s program underscores the difficulties of applying across linguistic and cultural boundaries uniform political notions of left and right. In Poland, “left” need not imply antinationalism, just as “right” need not exclude a commitment to social justice. Quite the opposite: left and right in fact compete in their welfare-driven commitments.