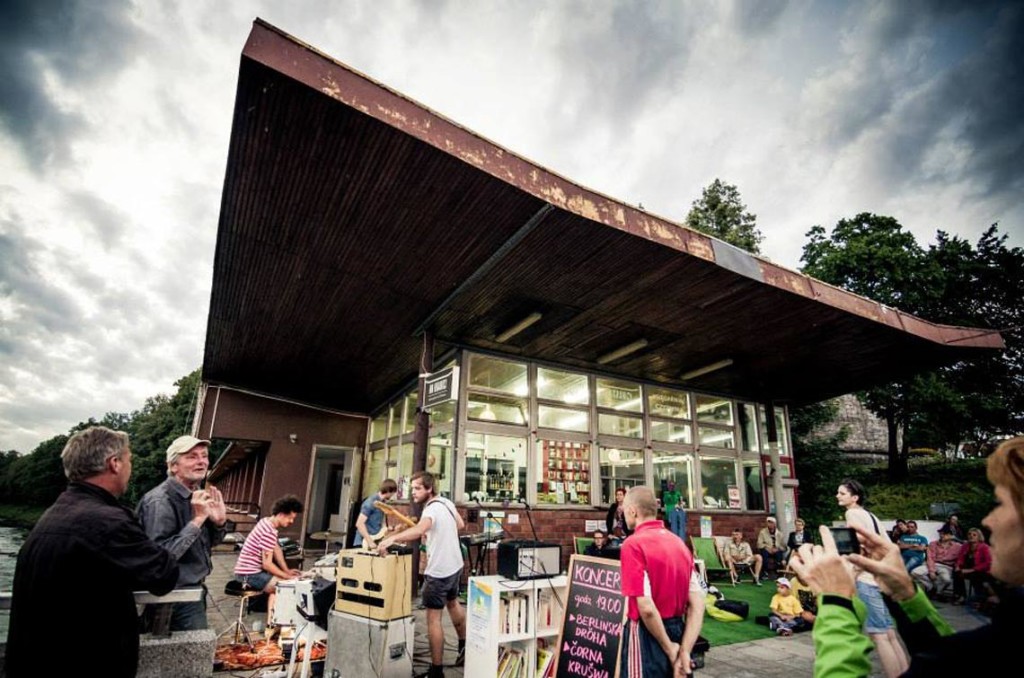 It is with huge controversy that the newest plan of Cieszyn’s municipality has been received. The cityscape is to lose the characteristic building of the former border post (Cieszyn is located on the Czech-Polish frontier). It is occupied by several NGOs, inluding Krytyka Polityczna’s Cultural Centre. The rightist local authorities want to spend 400 000 zlotys on demolition, and get rid of the NGOs residing there.

“The place is an excellent example of transformation in the best sense of the word: a place symbolic of the enforcement employed by a state that had no respect for the civic spirit has now been taken over by the citizens and it serves them. What ill will must one have to remain blind to the fact!” says professor Tadeusz Sławek, former rector of the University of Silesia, agitated on hearing the news.

The confusion as to the future of the building on Zamkowa Street has to do with the implementation of the Polish-Czech initiative “Garden of Two River Banks.” The project includes a bicycle/walking lane and the demolition of the structure.

“The municipality haven’t put the case to public debate; they want to tear the building down, while they have not or don’t want to have a project that would allow for a further existence of the centre, a collision-free construction of the lane, and architectural modernization of the venue, to everyone’s satisfaction and to the city’s best interest,” says Zbigniew Machej, a poet and translator living in Cieszyn, former director of the Polish Institute in Bratislava. “No one has come to meet with us, there is no communication. Nobody would come to meet us in person to inform us about the plans,” says Dr Joanna Wowrzeczka, the coordinator of Krytyka Polityczna’s Cultural Centre.

The chief argument for the demolition used by the magistrate is that it allegedly presents “an eyesore in the historical cityscape.”

Meanwhile many architects, e.g. Professor Irma Kozina or Dr Przemysław Czernek say that the structure is indebted to the finest achievements of late modernist architecture. The building of the former border post at Cieszyn’s Friendship Bridge was designed in the years 1961 – 1962 by Zbigniew Kołder, one of the best architects at the Miastoprojekt Katowice agency. With some necessary renovations, the venue would make a perfect match to the building of Avion Cafe on the Czech bank of the Olza River.

Because of the plans for demolition, several NGOs from Zamkowa have found themselves in jeopardy. Those include: the Serfenta Association for the research and promotion of traditional basketry; Modelarnia Ceramiczna, designing ceramics and manufacturing china; the Creative Women’s Club Association; Social Cooperative “Parostatek”; the School of Painting, Drawing, Photography and Thinking 4D Art Studio; the “Kogucik” Club of Music and Philosophy; Cafe Granica. Joanna Rzepka-Dziedzic, curator of Cieszyn’s Szara Art Gallery has no doubts: “excusing one’s drive to destruction with one’s dubious sense of aesthetics and inglorious communist history seems to be either an instance of shortsightedness and ignorance, or a calculated action where the real rationale is concealed.” For the mainstay of activities at the venue is Krytyka Polityczna’s Cultural Center: a place of debates, lectures, seminars, concerts, film screenings, etc.

“Its animators and regulars have aptly combined the activities of a discussion club – organising debates, lectures, screenings, exhibitions, concerts and artistic actions – with educational, social, and integration projects, carried out in schools and reaching out to the local communities,” says Przemysław Wielgosz, editor in chief of the Polish “Le Monde Diplomatique.” All those who have their headquarters at no. 1 Zamkowa Street participate in the costs of the building’s maintenance, investing in its improvement. They also have plans for several years ahead.

The seven organizations secure funding every year worth around 500 000 zlotys, with no help from the local government.

“We get literary 0 zlotys from the city, and with our work here we generate annual profits worth 900 000 zlotys,” says Urszula Szwed from the Social Cooperative “Parostatek.” The turnover of the organizations housed by no. 1 Zamkowa Street are at the level of the annual resources allocated to municipal cultural institutions. Every year Zamkowa’s events and educational and artistic workshops are frequented by five thousand people. The organizations are the source of twenty permanent jobs and employ a further fifty people from Cieszyn on other types of contracts. They also bring to the city more than three hundred guests annualy, whose stays they have to finance on their own.

There is enough reason to ask whether the attempt at razing the building could be politically motivated. Maybe the actual objective is to remove a spot that activates the residents of Cieszyn and teaches them critical thinking and communal action.

Polish media devoted their stories to the social enterprise at Zamkowa; Polish Radio Three, “Architektura,” “ELLE Decoration,” “Design Alive,” “Arteon,” “2+3D,” “Rzeczpospolita,” “Gazeta Wyborcza,” “Dziennik Zachodni,” to name some of them. The place has hosted over 900 high-profile guests, representatives of the world of culture, science and politics from Poland and abroad. The place was also given coverage on international media, as this is also where, for four years now, networking meetings of organizations from all over Europe have taken place. Of paramount importance to the tenants of no. 1 Zamkowa Street is work with children. More than a dozen projects addressed to them have been carried out at this point, resulting in actual artefacts such as a virtual map of Cieszyn-as-seen-by-kids, a radio show about the nearby Głęboka Street, or the drama piece Okruchy.

“This is where the kids choose to come: Dawid, Piotrek, Oliwia, Igor, Denis, Agata and others. Those living downtown used to have a hard time finding a place they could like, and here at last we were able to overcome their mistrust of institutions and of classes offered by schools,” says Agnieszka Muras, an animator working at the Cultural Centre. The place offers free-of-charge day care for children and youth from downtown Cieszyn, extracurriculars, artistic and educational workshops, summer vacations, trips and activities.

“To demolish the building means to rob the children of their trust, for they feel attached to the cultural centre as one does to one’s home,” says Dr Wowrzeczka. “The whole lot of work and joy of making small steps together with the girls and boys here and the kids we managed to bring from the downtown tenements may be wasted,” adds Anna Cieplak, who works with youth in the building.

“Krytyka Polityczna’s Cultural Centre and bookstore, residing on the border, testify to a wise takeover of a former institution of division and control and transformation into a centre of thinking and acting toward a common good. Liquidation of the buidling, entailing liquidation of this social achievement on the part of the people from Krytyka Polityczna, will weaken the already difficult process of building a civil society,” says Prof. dr hab. Ryszard Koziołek of the University of Silesia. But perhaps it is the social capital that Cieszyn’s authorities find problematic? Krytyka Polityczna’s Cultural Centre has become a prominent actor in the debate on issues vital to the city. Organizing on the initiative of the Centre’s activists the Congress of Culture and Communication, protests against the liquidation of a pre-school, defending the Szara Art Gallery and the CST Theater, the efforts to initiate a municipal strategy of cultural development, actions voicing concern over the city’s railroad station – all this has shown that the people gathered around the Cultural Centre constitute a major voice in the discussion about the city’s future.

Given all that, there is enough reason to ask whether the attempt at razing the building could be politically motivated. Maybe the actual objective is to remove a spot that activates the residents of Cieszyn and teaches them critical thinking and communal action.

And all the more so, since the local authorities have avoided dialogue and proposed no alternative solutions. “You can’t help feeling that the main reason for the demolition is to oust Krytyka Polityczna,” says Machej. “Many times we were told that with a different logo, we could expect a different kind of talk,” adds Wowrzeczka.

Cieszyn has already seen the demolition of its bus station; today its empty tarmac surface near the city centre is overgrown with grass. The dilapidation of the railroad station is progressing, as the city has no connections with the rest of Poland. Today you can reach Cieszyn only with private transport. Meanwhile, the rulers of the city seem not to care at all, and soon enough another vital spot in Cieszyn may vanish. Another of Cieszyn’s “windows to the world”.

**
Send a Letter to the Mayor of Cieszyn

I have been stunned to hear the news about plans made by the local authorities of Cieszyn to demolish the building of the former border checkpoint, which in the last decade has become a vivid stage for local socio-cultural activities run by several NGOs, activists, artists, and experts.

The idea seems unreasonable, bearing in mind that the long-term and sustainable development of the city [supported strongly by all EU priorities and projects!] means organizing public space in a way that  adds new social functions and value, but also sustains current and possible future socio- cultural activities.

It would also be a shame and a great loss to demolish a self-sufficient, regularly modernized building, an example of modernist architecture.

I have visited the cultural centre in Cieszyn a few times as an expert/artist/guest/activist/etc.,* and it was always with great pleasure. Those visits are the reasons why Cieszyn remains in my memories as an enjoyable and culturally vivid city in Europe. Even compared to bigger cities – in Poland and throughout Europe – the number of cultural and social activities and campaigns involving the local community, guests, as well as the wide children-directed offer, is very impressive.

We call for a reconsideration of the idea of demolishing this very unique building and of throwing out activists and artists from the former border checkpoint.