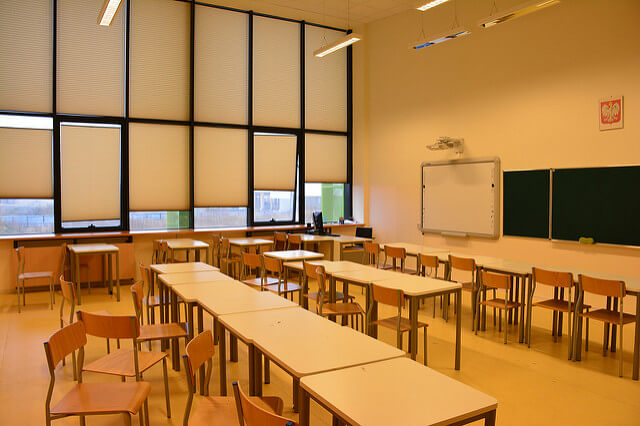 The disgraceful takeover of the public media, the extremely detrimental deadlock in the Constitutional Tribunal and frantic plans to cut down parts of one of the last primeval forests in Europe – Law and Justice’s brutal reclaiming of the state after eight years in opposition may seem farcical but is undoubtedly dangerous. Last November, when Beata Szydło announced the list of her newly appointed ministers, political commentators focused on the three most ridiculous choices: Antoni Macierewicz, the symbol of Smoleńsk conspiracy theories, as the Defence Minister, Mariusz Kamiński and Zbigniew Ziobro- both with a record of abusing power- were appointed as the Special Services Coordinator and Minister of Justice. But we all knew the inglorious trio wasn’t everything that the new government had to offer. Now it’s the Minister of Education who’s bound to become public enemy number one, by introducing the latest major project which is turning Poland upside down.

Minister Anna Zalewska leaves us no choice but to find her to be a right-wing zealot. An experienced teacher and an MP from the post-industrial town of Wałbrzych in Western Poland, she was barely known before her appointment but now we have all learned about her shocking views. Did Poles murder Jews in Jedwabne? “It’s only an opinion”, says Zalewska. She announced an upcoming “dialogue with teachers and parents” – but definitely no place for sex-education  in schools. With a smirk on her face, Zalewska will make schools just another branch of PiS’ national-conservative propaganda. Her latest project is to change the whole school system from 6+3+3 years (elementary school, middle school, high school) into 8+4 (elementary school and high school only). Or – to put it simply – no more gimnazjum (middle school). Even though it was one of the ruling party’s core promises in the electoral campaign, the reality of its realization will undoubtedly disappoint even those who welcomed the concept.

With a smirk on her face, Anna Zalewska, the Minister of Education, will make schools just another branch of PiS’ national-conservative propaganda.

Middle schools – introduced in 1999 – have been considered the source of all evil for years. Gimbaza – a scornful epithet for students aged 13-16 – is a symbol of stupidity and immaturity. But believing that changing the education system will suddenly make adolescence easier is a fantasy. Above all, the practical questions remain unanswered. We don’t know exactly what will happen to the school buildings. Middle schools are often well equipped and have been recently renovated thanks to European Union funding. Elementary schools (now only six but soon to be eight grades) will definitely need some of these facilities as currently there is no way that they can take on more students. In many cases this will mean a hidden 4+4+4 system – children aged 11-15 will study in separate buildings far from home just as if they were attending another school. It is most likely that not all middle school buildings will quickly find a new use, which poses the question: how long will they remain empty for?

These radical changes might also cost huge amounts of money and many municipalities will likely go bankrupt as educational subsidies, a very important financial source, will fall with the shutdown of gimnazjums. The sudden end of middle schools next year will also create a bizarre situation for students who finished elementary school a month ago. They will begin gimnazjum in September but after a year, under the proposed plans, they will go back to  elementary school (as the 8th grade now won’t exist) and then to high school. Chaos? This is just the tip of the iceberg. “Schools don’t like revolutions, so everything will be evolutionally thought over and prepared”, says Minister Zalewska. Unfortunately, that doesn’t even seem likely. A new bill will need to be written and passed, a new curriculum formulated, new textbooks written and published, middle schools closed and then new elementary schools opened in the former middle schools buildings – all that in just one year. Closing middle schools, combined with a generation of baby boomers entering compulsory education will mean firing thousands of teachers. The unions won’t give up easily, so it is likely that strikes will be held across the whole country.

What makes PiS more than just a regular national-conservative party, is their exceptional hatred for the centre-right Civic Platform party (PO) which ruled Poland between 2007 and 2015. The current government will do everything to undermine even the best ideas of its predecessor, with huge support of all the voters let down by PO. The way Civic Platform passed its most controversial educational reform proved that even their good projects were enforced in a way that annoyed too many citizens, who felt that the government simply patronized them and ignored their opinions. The Ministry wanted Polish children to begin compulsory school education one year earlier, at the age of six – just like in most European countries. The social pushback was equally impressive and unreasonable. Various NGOs were accusing politicians of experimenting on children and demanded a referendum. These allegations were obviously absurd, but nevertheless the Ministry should have treated protesters with respect and understanding as everyone is worried when it comes to their children’s education. PO didn’t manage to convince anyone but passed the bill. After PiS’ victory, Minister Zalewska quickly undid the reform.

What perfectly highlighted the difference between PO’s clumsiness and PiS’ ideological madness, was the way PO modified the high school curriculum. Before the reform all students were supposed to study history from ancient times to the 20th century three times – in elementary school, in middle school, and in high school, each time in a little bit more depth. In reality, history teachers seldom managed to reach World War II before the last year ended, so a typical student never completed a full history course. To make sure every student would have the opportunity to be taught about World War II at least once, the Ministry changed the curriculum – history in middle school ended in  the 19th century and then, in the first year of high school  teachers could teach everything important about the 20th century without rushing. Students willing to take final exams in humanities would later concentrate on ancient and medieval times once more, while those interested in mathematics or natural sciences  attended a less traditional but more interdisciplinary class of “History and Society”. Right-wing activists reacted hysterically – they were comparing the then ruling party to invaders who wished to make Polish students forget their history. Some of the protesters even organized hunger strikes.

As a political party which would rather look back in anger than face the future with hope and optimism, PiS has chosen history as its most powerful ideological weapon and the fight reaches far beyond the school walls.

It is no wonder that this one school subject is especially important for right-wing propaganda. As a political party which would rather look back in anger than face the future with hope and optimism, PiS has chosen history as its most powerful ideological weapon and the fight reaches far beyond the school walls. The most significant example of PiS’ mendacity is how it treats the history of the Left. 27 years after the Polish People’s Republic collapsed, local right wing politicians still search for even tiniest traces of socialist memory and try to erase them – even if they had nothing in common with the Communist regime. Although Poland has an impressive history of patriotic socialism, the Right seems incapable of noticing the difference between the Left’s heroes and Soviet-controlled apparatchiks. Streets in many Polish towns are named after a legendary anti-fascist brigade fighting in the Spanish Civil War – Dąbrowszczacy. Now they are called Stalin’s spies and considered unworthy of being commemorated. And we all know who will be promoted now: Lech Kaczyński, a hopeless president and PiS leader, Jarosław Kaczyński’s twin brother who died in a plane crash. The ruling party is already rewriting history and making the Kaczyński brothers the greatest heroes of  recent decades, while simultaneously dissembling their political opponents’ achievements. This could be easily noticed at the exposition about Poland’s access to NATO during the recent summit in Warsaw. And if the twins don’t fit, there’s even a better candidate for right-wing streets and statues: the Cursed Soldiers. And who cares that this vague term for post-war partisans encompasses both heroes of the anti-communist resistance as well as regular anti-Semitic thugs?

PiS’ favourite toy is the Institute of National Memory. Instead of being a research institution, it has long served as a historical police force, controlled by PiS’ supporters even when PO governed. Now it wants to hire a specialist to fight “defective memory codes” or, to be more precise, the common use of the term “Polish death camps” in foreign media. The unfortunate and unfair simplification is a mistake, which should be corrected, but treating it as a part of worldwide anti-Polish propaganda is laughable. Especially when I actually hear the Minister of Education denying the Poles’ shameful part in pogroms. Apparently, the future of Polish education depends on a person who really needs a good history lesson.