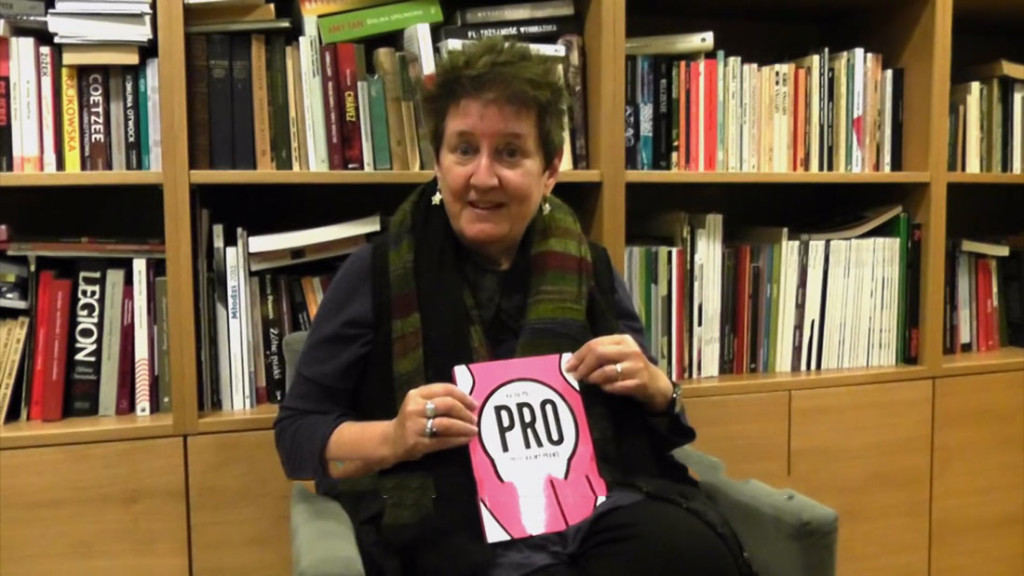 Agata Diduszko-Zyglewska: The new law would prohibit abortion with no exceptions outside of direct danger to the woman’s life, while abortion providers would be punished with jail (for up to five years). The conservatives from the ruling Law and Justice party announced that they would reflect on it. What would be the probable consequences of introducing such a harsh law in Poland? Do you know any examples of similar situations in other countries – what happened there?

(1949) is an American feminist poet, essayist and critic. She is the author of four essay collections and two books of poetry. Her writing focuses on political and social issues, including abortion rights, racism, welfare reform, feminism, and poverty. Her book “Pro: Reclaiming Abortion Rights” was published in 2015 in Poland by Wydawnictwo Krytyki Politycznej (Political Critique Publishing House) with a special chapter dedicated to restrictive Polish abortion laws.

Katha Pollitt: Abortion is criminalized without exception in Chile, Nicaragua, El Salvador, the Philippines and Malta (all Catholic countries where the church is powerful) and criminalized with a newly-enacted, very narrow exception for the life of the woman in Ireland. In many other countries abortion is permitted only for a few reasons, leaving the vast majority of women in those countries without the right to terminate a pregnancy. What happens when legal abortion is not available? Women have illegal abortions in great numbers. In Brazil, for example, the abortion rate is higher than in the United States. For women with money, illegal abortions are mostly safe, but for low-income women they can be very dangerous. In some countries, El Salvador for example, women are imprisoned for supposedly ‘having an abortion’ that may actually have been a normal miscarriage. In Nicaragua, where a total ban was passed in 2006, Human Rights Watch reported that at least 80 women died in the first eleven months as a result of the ban. In these countries, women who need abortions even for grave medical reasons may not be able to get them; in Ireland in 2012, Savita Halappanavar died of sepsis because the Catholic hospital refused to complete a miscarriage until the foetus died. In Mexico and Paraguay even children of 11 and 12 have been forced to give birth.

The Public Opinion Research Centre in Poland announced in 2012 that one in four women in Poland will have an abortion during her lifetime. This means about four million women would be affected. How should we speak to these women and their partners to convince them to stand for their rights and for the rights of other women?

Instead of seeing abortion as shameful proof that a woman is a selfish slut, we should talk about it as something women do in order to have a reasonable life.

Social pressure and shame keeps a lot of women from speaking about their own experiences and defending their rights. They keep women isolated, too. Each one thinks she is the only one. The first step in claiming your rights is to break the silence. One way to start the process is to talk about abortion as a normal part of living in a female body. That was what I tried to convey in Pro. Abortion has always existed, and Catholic countries are no exception. Instead of seeing abortion as shameful proof that a woman is a selfish slut, we should talk about it as something women do in order to have a reasonable life – to get an education, to get or keep a job, escape a bad relationship, or care for the kids they already have. Women – and men – should have children when they are in a good place to care for them, not because a sperm found its way to an egg.

Anti-abortion law especially impacts poor women. The middle class and politicians have enough money to avoid a restrictive system if they or their daughters face the problem of an unwanted pregnancy. Are there any convincing ways to bring attention to this moral issue? How can we convince the middle class and the political elite to show solidarity with the poor on this matter? How can we convince politicians that, in the long run, it will pay off better to take care of young parents and already-born kids from the orphanages than to jail women who don’t want to have children?

Sooner or later, the problems of poor women will affect better-off women too. All women suffer when a basic medical procedure is turned into a crime. Imagine if men had to have prostate surgery in a motel room or get Viagra from an illegal website! It would never happen. Criminalizing abortion distorts the practice of obstetrics and gynecology. It makes doctors afraid to treat haemorrhages or complete miscarriages, as happened with Savita Halappanavar. In the United States, the so-called pro-life movement claims that common methods of birth control – the Pill, IUDs, emergency contraception – are really abortifacients. Well-off women might find that someday these methods are restricted too.

When abortion was illegal in the US, poor women were not the only victims of botched procedures: students died, young women died, women who happened to find a practitioner who didn’t know what he was doing died. There was a lot of self-induced abortion, and before the abortion pill it was the most dangerous way to end a pregnancy. And death isn’t the only harmful possibility: women could be injured, they might have to pay outrageous fees, they could be sexually molested and humiliated, and they could be arrested and forced to testify against the abortion-provider in court.

All women suffer in another way too. Even when the procedure itself is safe and affordable, and the illegal clinic is clean and pleasant, and the doctor is kind and respectful, the very fact that ending a pregnancy is illegal tells women that they are bad people who deserve society’s contempt because they don’t want to be baby-machines. It says that their hopes and dreams and plans are unimportant. It says that their own convictions about how to live do not matter. You think two kids are enough? You think you are too young? You can’t afford a child? Too bad!