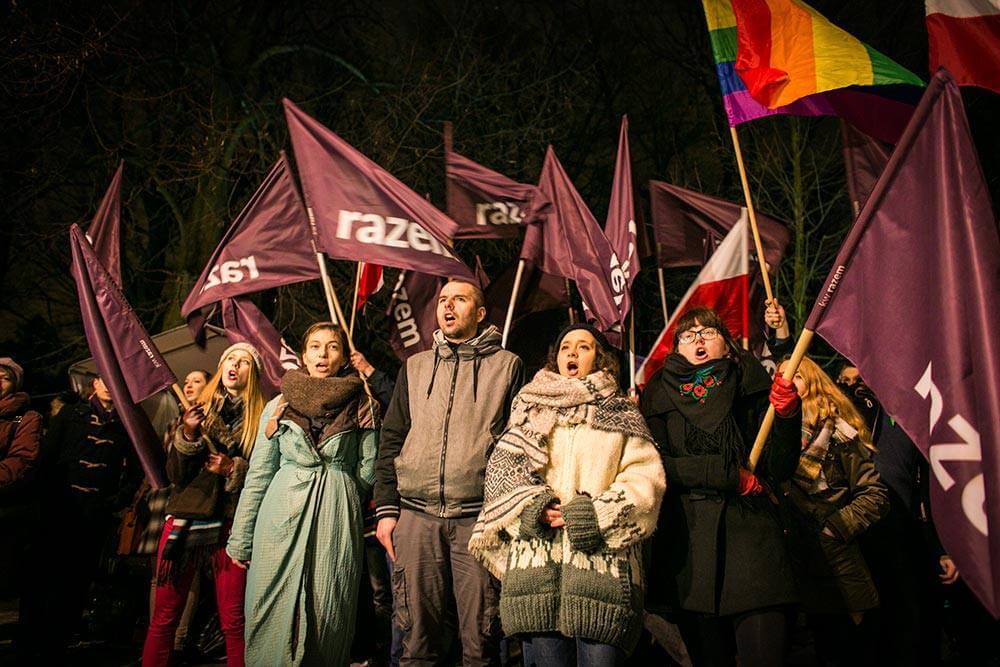 “We are not the old Left. It is more than clear if you look at our faces, our age, the way we speak and our new way of making politics.” In ultra-conservative Poland, something is moving. We meet some of the founders of Razem (“Together”) a new political party emerging from social movements and strongly inspired by the experience of Podemos in Spain. We discuss their project and the Polish scenario: from the surprising social policies of the current authoritarian government to the liberal opposition defending freedom of information but forgetting about inequalities. And the meaning of launching  a new party from the bottom-up today.

Lorenzo Marsili: Why a new party in Poland? Why did you make the shift from social movements to party politics?

Marcelina Zawisza & Maciej Konieczny: There was no real left party in Poland. There is the so-called Socialist or post-Communist party, which is just bureaucrats of the late Communist government that became the new establishment after the transition – basically neoliberal, socially conservative, not leftist at all, but they took the place of the left in the country and our objective was to re-open that space. Nobody trusts parties anymore here, and this is why we were very sceptical regarding the success of this operation. But if parties are in distress, social movements are not in a better situation: small, fragmented groups, incapable of having a strong impact, chronically divided.

We wrote an open letter to all movements. We received two thousand signatures in a few days, almost all of them – and this was the real surprise – from people we didn’t know and who never took part in organised mobilisations. We really wanted to know who they were! We met them, and to our surprise we learnt they were not interested in traditional left-wing organisations or movements. They reputed those political forms to be old and useless.

This is a story we’ve heard before. When talking with Podemos’ founders they say that to launch a new political project they had to leave the world of organised movements, who at the beginning were even against them, in order to intercept the energy coming from the 15M and only after that, they could go back and include organised movements. Is it something like that?

Exactly. The organised left has been in conflict with us since the beginning. But now many left the traditional movements or organisations and decided to join Razem instead, to come out of their small bubble. We decided to be part of the trail of the new European left, moving from the base.

Our program is somehow not so radical, we could define it as social democratic. But this, in Poland, is something new.

At last elections there was a coalition of the United Left, post-communists, Greens, left-liberal… Why didn’t you join it but decided to run by yourself?

We have our own agenda and a new way to conceive politics itself together with its organisation. The old way of doing politics is dead and is represented by the same names and the same politicians and power groups that, election after election, try to found a new coalition, a new alliance, just to win again their seat in Parliament. We are talking about the political class as a whole. It simply doesn’t work anymore and it isn’t what we want to do. Moreover, these parties, when elected, passed laws permitting evictions, perfectly fitting in the mainstream “there is no alternative” narrative.

And they eclipsed. The post-communist party was at 40% and now is not even in Parliament. But what makes your model work? What are your flagship methods or policies?

Our program is somehow not so radical, we could define it as social democratic. But this, in Poland, is something new. Nobody ever talked about progressive taxation, redistribution… And now, when statements concerning workers or poverty are needed by the media, they come to us. The same happens with social issues: we are the ones asking for the decriminalisation of abortion, still an illegal practice in Poland. And when the government tried to pass an even more restrictive law, making abortion illegal even in case of rape, we organised a rally in Warsaw, with more than 10 thousand people. The biggest demonstration ever on this matter in Poland.

Talking about social policies, the current government – led by Kaczyński’s party Law and Justice – is quite an interesting case. It is for sure an authoritarian, xenophobic, illiberal government, on a collision course with the EU. But it is, nevertheless, passing some measures that could be seen as traditionally leftist: reduction of the retirement age, maternity allowance, social housing. What do you think about it? Is this a new kind of nationalist socialism?

We must say we are surprised as well. We thought the social agenda mentioned during the political campaign would be forgotten once elected, as it had happened when the same party had the chance to govern previously. But now they are really doing it! They are way more nationalistic and authoritarian than the first time, but they are also way more social. For the first time we have assisted to a growth, rather than to a reduction in welfare provisions. The new maternity law will drastically reduce child poverty from 28% to 10%, an issue closely linked to large families here in Poland. And for the first time, the most of public spending will go to the poorest: 6 billion szloty to the poorest 10% of the country, only 300million to the richest 10%.

So, for the first time there are redistributive policies.

And we will not be the ones criticising them. A social housing program was launched, not giving resources to banks or big building companies, but giving resources for controlled rents. And there is more: the taxation system is undergoing a modification that will make it more progressive, flat tax is being abandoned together with regressive taxes for the richest. But at the same time, the government is extremely authoritarian. A militia with semi-automatic weapons is about to be created, mostly made by components of far-right groups. A bill against terrorism is about to pass, creating a permanent state of emergency. Not to mention the gag that has been put on the press or all attacks to the independence of the Constitutional Court. It is quite frightening.

And it is against this authoritarianism that we have seen so many demonstrations in Poland. But you have chosen not to join KOD, the organising platform. Why is that?

Well, the governing party is in fact terrible, but this demonstrations are mostly organised by previous governments’ élite (Civic Platform, the party of today’s President of the European Council, Donald Tusk).

They demonstrate for freedom of speech, but then attack the government’s social policies reputing them a way to “buy” votes. They don’t understand that this money is incredibly important for many people. They tell the poor they should go out in the streets, fighting to save our constitutional system and at the same time that by accepting 500 zsloty per month as maternity benefit they are selling themselves. And all this while a majority of the low-middle class only earns 2.000 zsloty per month! They are completely out of touch with reality. And this is how in Hungary Viktor Orban obtained an absolute majority in Parliament, by having only one opposition representing only the élite.

We want to kick out this government, but to do it we believe that just to gather liberals in big cities is not enough. You have to reach out to those people who now vote for Law and Justice [the governing party]. If no one has the courage to create a social agenda, then the space is open for authoritarian forces.

We didn’t call ourselves “something-left”, as nobody here know what left is anymore. We called ourselves Razem, “Together”.

What is the social base of the governing party?

They have a cross-cutting base. Many vote them as they are thought to be against the establishment and the people had enough of the previous government. A government that chose to ignore completely all social issues. Civic Platform talks about those Poles who had to emigrate as “lucky” people who had the opportunity to have a working experience abroad. They didn’t realise how much suffering was brought by family separations nor that 2 million people couldn’t find a job in their own country. These oppositions – KOD, Civic Platform – are part of the post-transition elites that now would love to just go back to previous business as usual. All without realising inequality levels are way higher in Poland than the European average.

You just received considerable public funding because of your result in the last elections. You have three more years until the next one: what now? What will be your next steps?

We are trying to open 25 social spaces all around Poland. They won’t be just normal party offices, but community places where everyone can come and utilise the space, organise a dance lesson, classes for children, legal assistance and so on. This is something the socialist party of Poland used to do before WWII. We do have a strong tradition of  political parties as social entities, working with cooperatives, unions, even sport clubs, way more than just an election to election machine. We didn’t call ourselves “something-left”, as nobody here know what left is anymore. We called ourselves Razem, “Together”. But our origins are clear, and we want to start anew from there.

Lorenzo Marsili
Lorenzo Marsili is a writer, commentator and the founder of European Alternatives-a transnational citizen’s movement. He is also a host for Talk Real TV, a spokesperson for European Citizens Initiative for Media Pluralism and a member of DiEM25.
> see other articles <