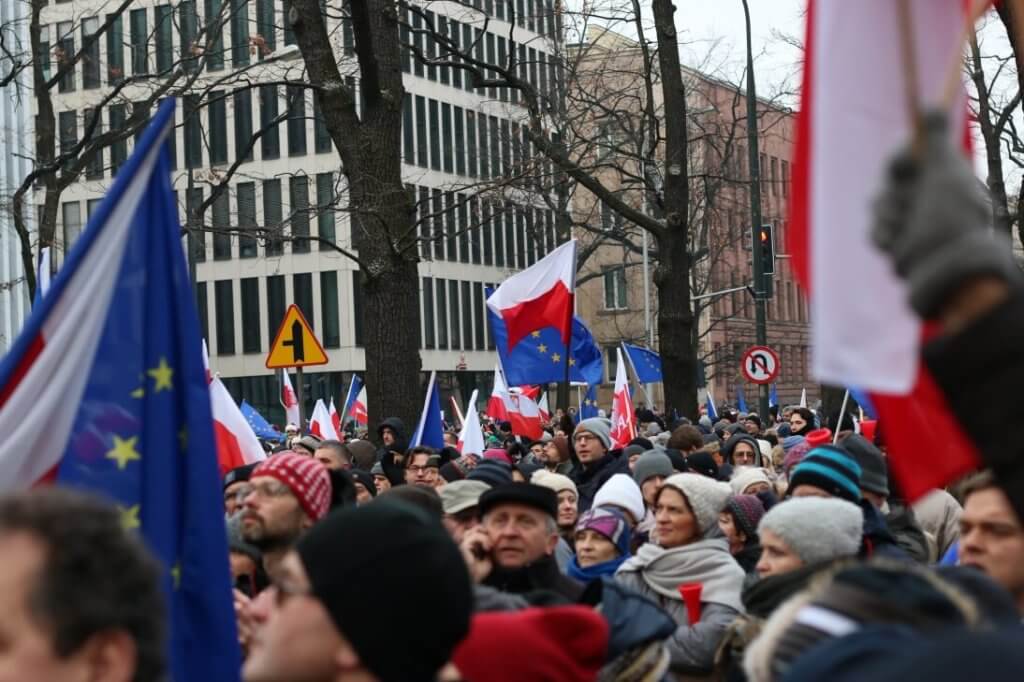 Anti-government protests in Warsaw on 18 December. Photo by Marta Modzelewska.

What is currently happening in Poland might be a breaking point: no, the government will not be abolished and the opposition will not be crushed, but the recent developments might contribute to the birth of a major third political power in Poland. A power not engaged in the hysterical deadlock between the two major ones. The important question, then, is whether the third power will be the left or rather the anti-systemic far right.

There is no doubt that the way the liberal leaders act is only perpetuating the logjam.

If we look closer at what triggered the crisis – the non-constitutional vote in parliament on Friday 16 December and its potentially disastrous consequences – it becomes obvious that it really happened for no reason. The governing party, having a majority, could have passed all the bills anyway. None of them was particularly controversial, or at least not more controversial than the usual PiS production. The way the situation escalated was truly childish: during a regular session, one of the opposition MPs wanted to protest the planned ban of the media from the Parliament and showed a piece of paper with “#freemedia” written on it. It was a minor incident, but the Marshall of the Parliament decided to exclude him from the session. In response, the opposition MPs blocked the lectern and made further debate impossible. The Marshall was first ready to negotiate, but then consulted Jarosław Kaczyński, the head of Law and Justice, only an ordinary MP himself, and decided to move the session to a different room, where the illegal votings took place.

Even the beginning of the crisis showed that the major motivation of Law and Justice was not political profit, but a dumb and stubborn wish to show who’s the boss. This camp’s major experience for the last decade has been humiliation from the liberals. Today, in power for over a year and leading in the polls, what Kaczyński and his praetorians still want most is to take their revenge and humiliate their opponents right back. On the other side of the barricade the liberal camp is driven by a similarly destructive emotion: furious and desperate hatred. Sure, there is no symmetry and the main responsibility is on the side of the government. The ruling camp’s actions can destroy the country much quicker than the actions of the opposition, simply because they have access to power.

What was clear was that the ruling party’s camp dreamt of a Reichstag fire. The opposition on the other hand referred to the government’s actions as a coup d’etat, compared itself to Holocaust victims and called for national insurrection.

However, there is no doubt that the way the liberal leaders act is only perpetuating the logjam: they focus on insulting Kaczyński for his short stature and lack of sexual life and seem to welcome with no demur the more and more frequent calls for violence expressed by their followers. Finally, in a move that is even more suicidal, they show open disdain for people who voted for Law and Justice because of the party’s anti-austerity agenda. Both now and in general, the liberals present no positive political program. During particular clashes their political demands are so detached from reality that they can only make their supporters more and more angry, as they never achieve anything. The loudest demand brought to the fore during this crisis was not for mediation or a repeat of the vote, but a call for earlier elections: a request both impossible and – considering the current polls – inevitably deadly for the opposition itself.

The three days following this episode showed where this dynamic can lead us. Both camps were escalating the situation to a degree that the only imaginable development was either street fights or withdrawal. Both camps were openly expressing the expectation – or, rather their perverse hope – that the other side will use violence first, so that they can strike back. Both presented themselves as martyrs and victims of the other side’s violence in order to escalate the conflict further. No doubt the situation was considerably more tense than during previous protests, and to the people who have only recently come out into the streets, the behavior of the protesters and of the police last weekend could seem drastic, but it really was fairly standard police response.

The real fight, however, took place not on the streets but on the Internet. The demonstrations were small compared to many previous ones, but what one could read on the web made Warsaw and other cities agitated and vigilant: police on the streets, people wandering around, waiting for something big to happen. The public media, quite a while ago taken over by the government, kept heating up the atmosphere by turning every piece of gossip and bit of fake information they found on Facebook and Twitter into breaking news. It was all topped off with a news portal very close to Law and Justice publishing a “leaked plan” of the opposition to set fire to the Parliament building. The “plan” included the liberal MPs working hand in hand with ex-officers of the communist intelligence and the Polish and German Antifa(!). Hard to say what was more absurd: the plan itself or the fact that somebody could actually believe it. What was clear was that the ruling party’s camp dreamt of a Reichstag fire. The opposition on the other hand referred to the government’s actions as a coup d’etat, compared itself to Holocaust victims and called for national insurrection.

Today we can already ask: Is there a winner to all this? In my opinion, no – not among the fighters at least. Kaczyński was the first to notice that calming down the situation might give him prevalence, so his press conference last week was conciliatory in tone, even if he withdrew from nothing. The political chaos allowed Law and Justice to make some potentially controversial decisions elsewhere, so one fight spared them a couple of others. On the other hand, the escalation weakened Kaczyński’s camp: several MPs and MEPs from his otherwise monolithic party openly criticized the blatant violations of the law. The liberal opposition on the one hand proved impotent on the street: it didn’t manage to mobilize nearly as many people as they dreamt and hoped for. On the other hand, it clearly won the internet battle: their hashtags and interactions on social media prevailed visibly over the engagement on the side of the ruling party.

The next topic is already looming: protests against the devastating reform of education, opposed by teachers, parents, trade unions, experts and pupils themselves.

What seems more and more clear however is that many people realize how futile and barren this conflict is. It has been defining the political scene in Poland for over a decade and, as we just saw, it can only end in ruinous political war, destabilization and – potentially – violence. It hasn’t led, and will not lead to a constructive change. It is a chance for something new to emerge, a power which would finally be able to say: the leaders of both sides of this conflict represent in fact one and the same rotten political class, while we can give Poland real change. There are two candidates for this role: the far right around the Polish fascists and the populist Kukiz movement, and the new left.

For the left the situation is difficult, insofar as it is sometimes impossible not to take sides when democratic standards are barefacedly violated. This is why the left urgently needs to create its own political fronts to fight for issues it can identify with. These struggles need clear, positive demands and objectives, creative dynamics and an emotional load combining anger with hope. With the Black Protest we saw that it is possible: it drew a new political division line, it had a clear demand, it led to a mobilization success which exceeded everyone’s expectations and gave the feeling of power, there was a new symbol people could unite around, and finally there was victory. What could be improved was the lack of an optimistic message at the end. The next topic is already looming: protests against the devastating reform of education, opposed by teachers, parents, trade unions, experts and pupils themselves. The political action around it already has a good dynamic and a clear goal. What is more, it puts the left in opposition to both the government and the liberals who cannot wholeheartedly support the demands of the trade unions. This is the way to go: if we manage to make such fronts into a permanent division of the political scene, we will be the winners of what happened on December 16.