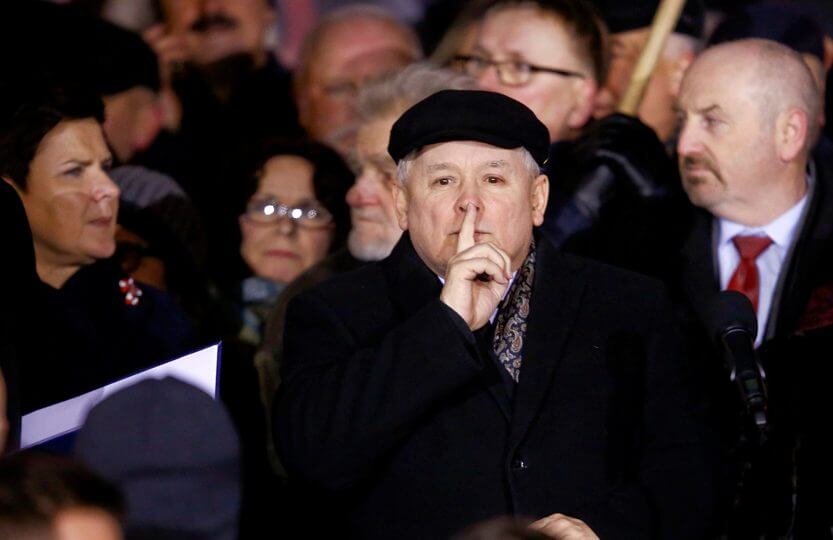 Poland has had a dramatic weekend. Once again, thousands of people came out into the streets across the country after a stormy night in Parliament on Friday. Law and Justice (PiS) has been systematically destroying the system of checks and balances necessary for a democratic state ever since it seized power in October last year. After paralyzing the Constitutional Court and recent repressive measures targeting NGOs and the right of assembly, PiS has taken another step in towards disassembling democracy last week by attacking media freedom.

From January 1st , only journalists representing a selected few approved media will have access to the Parliament. That PiS is obviously trying to dispose of what transparency there was still left would be distressing enough on its own. Friday’s events, however, escalated into a direct attack on the last bastion of the democratic establishment – the parliamentary opposition – when the governing party moved the actual voting process into a different room without the presence of opposition MPs. Thus, Poland finds itself in a deep crisis of parliamentarism itself.

The only hope lies in civil protests, the strength of which indicates that a large part of Polish society still refuses to have its democratic rights taken away.

The essence of parliamentarism under assault

For the whole weekend, manifestations took place in front of the Parliament building and the Presidential palace. The protests were originally organized by the Committee for Defense of Democracy (KOD) and the initiative Obywatele RP, but they were joined by opposition parties, the left-wing Razem party and the non-parliamentary liberal and post-Communist left. The atmosphere was fraught with tension – especially after the government organized a demonstration of its own for Sunday afternoon, where the opposition were referred to as “former Communists” and PiS politicians exalted those present as “the true civic society”. This is the first time since PiS came to power that they felt the need to mobilize their followers to go out into the streets to support governmental politics: it is obvious that Jarosław Kaczyński fears a real threat. However, PiS did not manage to rustle up a bigger crowd than the opposition.

Meanwhile, the opposition MPs keep occupying the main assembly hall, where the light and heating were turned off overnight, insistent on holding out until the next Parliament meeting, which is supposed to take place on Tuesday. This all seemingly over a restriction of media – but that most likely only served as a spark in an explosive situation where any further anti-democratic measure taken by the government would have incited an outcry from the people.

It all started on Friday afternoon, when MP Michał Szczerba of the opposition Citizens’ Platform (PO), took his place behind the lectern with a sign saying “Free Media”. The Parliament’s Marshal, Marek Kuchciński (PiS), rebuked him twice and eventually expelled him from the session. This angered the opposition – PO and Nowoczesna (Modern Party) – which proceeded to block any access to the lectern and eventually the entire front area of the Parliament, demanding Szcerba’s return to the meeting. While the Opposition chanted mottos about media and democracy, PiS MPs fought back by means of an anti-communist rhyme: „All of Poland today sees/you are Communists and thieves“.

Their choice of poetry was at least tangentially relevant, as the opposition’s protest also blocked the next item on the agenda: lowering the pensions received by the former members of Communist intelligence agencies. The blockade ultimately forced PiS MPs to leave the meeting room; outside of it, they whiled away their time by singing carols.

The fun stopped the moment the Marshal announced the session would be moved to a different room, of which he informed the Opposition using video screens. Members of PiS and the extreme right-wing Kukiz ’15 then supposedly – with no media present it is impossible to say what really happened in the room – took part in voting regarding pensions and the budget. The validity of decisions made this way was immediately disputed by both lawyers and opposition politicians. In a well-functioning democratic country, the whole matter would be decided by the Constitutional Court; alas, the Polish one has been effectively paralyzed since the end of last year thanks to the meddling of PiS.

And so Poland now faces a true crisis: the ruling party went completely behind the opposition’s back and in this way attacked the very essence of parliamentarism.

One by one, the institutions one can appeal to demand justice are vanishing without a trace. The Constitutional Court is under PiS’ control and the job of the media, who would normally be able to inform on the government’s measures and hold it accountable, just got a whole lot more complicated. Public media have become state media a long time ago: while mass protests took place in front of the Parliament, “public” television reported of an “attempt to destabilize the state”. The web page of this medium went even further: according to it, the opposition is leading a “hybrid war” against Poland.

Polish state media are a perfect example of the way militant anti-communism internalizes the very methods it seemingly opposes: the degree to which the language in state media is ideologized differs only very little from the news read and heard before 1989. The new rule that restricts which journalists can access the Parliament will cast the government’s measures into an even deeper shadow. Ironically, on Friday, a good amount of media intended to protest the changes by not publishing any pictures of politicians – but the idea was abandoned quickly after the unexpected developments both in the Parliament and outside of it.

Angry crowds started to gather in front of the building on Friday night in order to block the its entrance. Several brawls with the police took place, although the news of tear gas being used was just a false alarm. Ultimately, at two in the morning a police corridor allowed Jarosław Kaczyński and Prime Minister Beata Szydło to escape by a police-escorted car, allowing the opposition to score a significant symbolic victory over Kaczyński since he started assaulting democratic institutions one by one in the name of the“good change” PiS keeps promising its voters. The protests went on for the entire weekend and broke out in several other cities. In Krakow, angry protesters blocked the way of Kaczyński’s car on his monthly visit to the graves of his brother and his brother’s wife (who died in the plane crash at Smolensk in May 2008) in the castle Wavel.

It seems the protests will continue until Christmas.

Current developments were serious enough to unite the opposition – representatives of the parliamentary and non-parliamentary opposition, liberals and left-wingers all realized now is not the time to pursue their own goals and building up their own political programmes at anti-government protests: if they want to get results, they need to work together. There is a precedent, the Black Protest against the planned anti-abortion law this October managed to create enough pressure for the government to pull back on the issue – precisely because the opposition managed to overcome its differences.

This poses a considerable risk for the parties that have generally been reluctant to throw their lot in with the liberal mainstream opposition, like the progressive party Razem. There is a distinct possibility that they will be swallowed by an opposition movement built entirely around fighting PiS. Asserting a left-wing program in such a body would be extremely difficult. Yet they too now have no choice but fight for preserving at least a democratic minimum. Checks and balances are more or less out of order, but Kaczyński has not managed to stop the strength of mass mobilization. Thus the drama continues, fortunately without a tragic ending. At least for now.

This text originally appeared on A2larm. Translated from Czech by Michal Chmela.