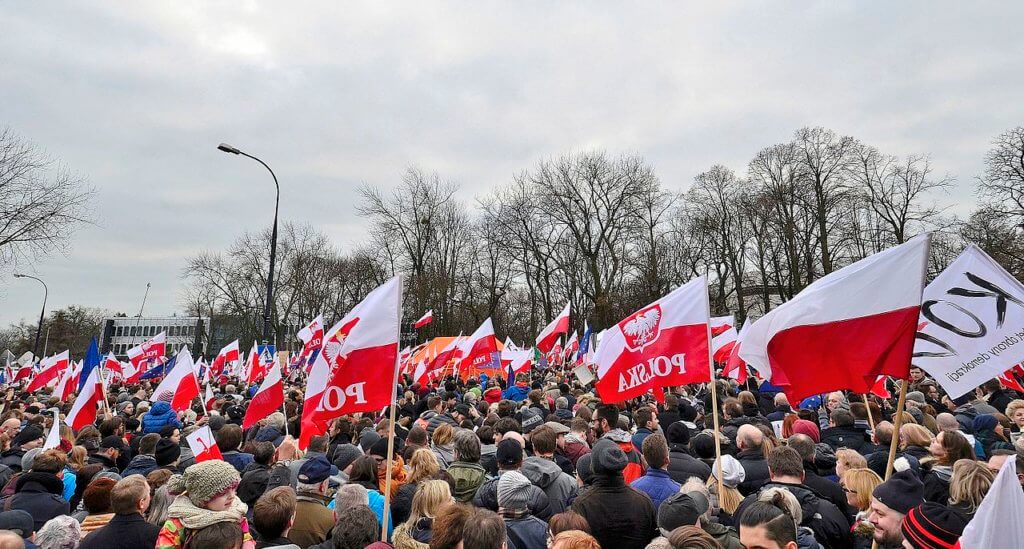 Enjoy it while it lasts. Photo by: Wikimedia commons.

We have gotten used to the Polish ruling party, Law and Justice (PiS), constantly shifting the borders of what is acceptable in a democratic regime with its authoritarian steps. Seizing control of the Constitutional Court and the planned total ban on abortions provoked international outrage and resulted in the establishment of two protest initiatives: the Committee for the Defense of Democracy (KOD) and the Black Protest. While all the former achieved was getting tens of thousands discontented people into the streets without achieving any actual concessions, the nation-wide mobilization of primarily women against the proposed abortion law forced the government to slow down and put the total ban on abortions on hold. This was probably the single biggest success of civic protesters in Poland – however, were the Poles to go out into the streets every time the government takes a controversial step towards limiting civil rights, they would have to start camping there. And and no one really wants that.

But just during the last couple of weeks, no less than three disconcerting events took place, which show the government’s intention to clamp down on the plurality of opinion.

The attack on NGOs

It is not easy to be a non-governmental non-profit organization in the Visegrad region. In Czech Republic, NGOs are constantly being attacked since “no one elected them”, in Hungary, the Orbán government terrorizes NGOs with nonsensical financial audits and refers to them as “foreign agents.“ Law and Justice are now following suit with their own offensive against the so-called third sector. Similarly to Václav Klaus, Jarosław Kaczyński regards civil society as something rather superfluous, constantly getting between the government and the people. And unlike Klaus, he is in the position to make the work of non-governmental organizations a lot more difficult.

State-run television and the right-wing media have embarked on a systematic campaign of defamation against NGOs that not only sap grant money from the state, but also take money from other countries. Among others, organizations like the Stefan Batory Foundation (which provides funding for many civic and social activities in Poland) and the left-wing medium and publishing house Krytyka Polityczna, have been accused of being “agents of George Soros“. NGOs in opposition to the government really have no choice here – if they are funded by the state, it is obviously only to disseminate “leftist propaganda“ for the taxpayers‘ money. If they are funded from outside the country, they are guilty of pursuing outside (and in the case of Soros we can also surmise this means “Jewish“(!)) interests. Never mind that right-wing NGOs take outside funds as well – or the fact all the accused organizations publish information about their funding sources on their web pages: transparency does more harm than good in this case. Post-truth has come to Poland.

Now the government is working on establishing a National Centre for the Development Civil Society, which will supervise the distribution of finance towards non-profit organizations. If the traditional role of civil society organizations in a liberal democracy is that of a watch dog barking at the sight of non-democratic measures, PiS has just decided to deploy a mutt of its own – and it is much bigger and much meaner. It is not difficult to guess what kinds of organizations the new Centre will support: preferential treatment will be given to traditional families, Catholic values and patriotic upbringing.

While the government cannot ban outside financing, it can still fatally affect plenty of organizations by cutting off their state funding.

Freedom of assembly? Only for the Church and the nation

The amendment to the law on the freedom of assembly that passed in Parliament several days ago promises to threaten civic activity even further. Its goal is to limit public assembly – unless the event is being organized by the state or the Church, who will now have preference in booking space for public gatherings. Until now, the right to hold a public gathering was held by the first group that registered its intentions using appropriate channels. The amendment, while looking for all the world like a legal tool to prevent conflicts between different protesting groups since it forbids two different events to take place at the same time, in reality means that government-approved events take precedence over everyone else when it comes to booking the key locations where demonstrations usually take place.

Law and Justice’s endeavours to get opposition groups out of the streets are further reinforced by a clause that refers to “cyclical gatherings” taking place on state holidays, which will take precedence over one-time demonstrations. In practice, this means that while for example the regular march of nationalists on Polish Independence Day will be permitted, an anti-nationalist counter-demonstration can be dismissed simply because it would “compete” with the cyclical event. Worries were voiced by the Polish Ombudsman, the Helsinki Committee for Human Rights and the European Commissioner for Human Rights; the liberal civic organization “Obywatele RP” is calling for a demonstration on December 10th and KOD wants to take to the streets on the 13th – for all the good it may do, since the popularity of this civil movement keeps falling after tens of thousands of people failed to show up at their last protest on 11th November.

Left-wingers? Better lock them up!

What is truly worrying, however, is what can only be called a politically motivated trial: on November 29th, the ex-Senator, ex-Member of European Parliament and left-wing politician Józef Pinior was arrested for suspicion of corruption along with several of his co-workers. Pinior, having been a prisoner of the Communist regime and a member of Solidarity, is a persona non grata for PiS for several reasons: for one, the ruling party tries to base its legitimacy on both anti-communism and attacks on the former Solidarity elites. Furthermore, Jarosław Kaczyński is trying to seize the legend of Solidarity for himself, overwriting the history of who really played a key part in the anti-communist opposition movement. But Pinior is not an obstacle just because of his past; he is also the most vocal critic of secret CIA detention centres in Poland, and that is something the pro-American PiS does not want to hear. Furthermore, Pinior could pose a real threat to PiS in 2018 due to the distinct possibility of his success in the Wrocław local elections.

The court in Poznan eventually acquitted Pinior after a hearing attended by other legends of Solidarity – Karol Modzelewski, Henryk Wujec, and Danuta Kuroń – in his support. These former dissidents voiced warnings in the media: history comes dangerously close to repeating itself, they said, if they once again have to go to court to defend a friend detained for political reasons.

While the Pinior case seems to be an isolated incident for now, it remains to be seen whether it will become a precedent in discrediting political opponents under the guise of fighting corruption.

Despite all this, PiS’s poll ratings have yet to change in any substantial manner. Given the impotency of the European Union which currently has other worries than the quality of Polish democracy, and the fragmented state of the Polish political opposition which is failing to offer a better alternative than going back to the liberal statues quo ante that brought about the disappointment that resulted in the victory of PiS in the first place, it is safe to assume that the Polish government will keep getting away with more and more anti-democratic measures.

This piece is co-published with the Conversation.