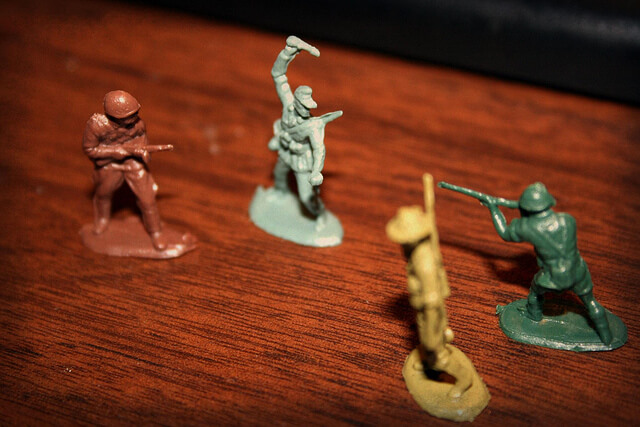 Just a few years ago, in the days when the Pendolino train was being test driven, when investors were investing and the far right was excluded from public debate, the “slow news season” in Poland was predictable. The streets sizzled in the heat, Sosnowski’s hogweed reigned supreme in the pages of the newspapers, along with dishonest travel agencies and burning grass. And when the hogweed flowered and all that remained from the grass was ash, it was a sign to move the discussion to focus on the start of the academic year and how school bags are too heavy.

However, today the situation has changed: because of Brexit, Trump, Putin, Erdogan, IS. It is all a little bit too complicated to simply reassure someone that there is nothing going on, so it is better to shout: war. This coming September, there will be war. Silly season à la polonaise.

It is all a little bit too complicated to simply reassure someone that there is nothing going on, so it is better to shout: war.

The first to paint this apocalyptic vision of this supposed war was probably journalist Grzegorz Sroczyński. He rightly observed that Polish journalists were more concerned with hurling insults at each other, rather than focusing on big events around them; something which he labeled as “irresponsible”. However, in his vision of Poland’s forthcoming invasion, he sees right-wing and left wing-journalists as well as politicians putting aside their differences in order to unite against the common enemy. The invader. He also raises panicked questions as to whether NATO will hesitate over defending Poland and whether perhaps they will send food rations instead of military support.

Sroczyński’s article was hot off the press when Anda Rottenberg joined in the discussion. She was returning from a weekend in Drohiczyna and saw branches laden with fruit, exactly as they had been in August 1939 before the Second World War broke out. I was moved by this metaphor, yet I was sure that no one would take this allegory as a warning of impending war seriously and that we would simply move back to the usual talk of students and their too-heavy backpacks.

Unfortunately that was not the case. This discussion compelled journalist Bartosz Wieliński to add fuel to the fire by quoting an unknown German diplomat who said with a trembling voice that wars most often erupt in August. The fact that the diplomat was trembling was actually because he saw a Polish press card (and Poles are well-known for being oversensitive when it comes to discussing topics related to war-especially in Germany). But, since Sroczyński, Rottenberg and Wieliński have all been hinting at the same things, it must mean that they are right and that something is about to happen.

I checked out the western media: silence. There is talk of war of course, but the one in the Middle East: the New York Times has a wonderful report about its history. Polish journalists can only dream of being able to produce such material: not because of a lack of talent, but rather a lack of funding. There are also plenty of articles about the troubles in Europe in the western media, despite the focus being on the Olympics in Rio. But there is not a word about the supposed September campaign, which Russia, China and Islamic State are preparing for Poland.

Ok, jokes aside. These are all important issues and ones which Poland should engage with in order to have a voice when (or even if) it comes down to Europe to take serious decisions. Polish journalists should write about these issues as opposed to being fixated on commenting on MP Pawłowicz, who – like Ed Miliband in the UK – committed the ultimate faux pas for a politician and was photographed eating a sandwich. But what if Sroczyński does not beat himself at his own game in picturing this apocalyptic and hysterical vision of an upcoming war that we should start preparing for? Would someone consumed with this fear of war be a good adviser on foreign policy issues? Will these narcissistic suggestions that all of the world’s “bad guys” are out to get Poland really help to develop an attitude of solidarity with Europe? Or will it drag the silent majority onto the same page of spasmodic isolationism as is harboured by the PiS government in relation to European issues?

The key to understanding what is going on around us is to comprehend how new media operate to spread panic, rather than looking at clues that connect us to August 1939.

Everyone has mentioned that their gut-feelings point to Putin being the most likely aggressor. But in reality, Poland is the last country which Putin would have a desire to send tanks into. Sending tanks into a country belonging to NATO is too risky. With regards to their “Crimea-is-ours” attitude, this is nothing more than an extension of Russian imperialism and a way to maintain support. Additionally Poland has another cruel, but effective shield against Russia: widespread Russophobia in society. Putin would not even dip his toe into a country in which he has such little political or public support. Of course, this can change with the emerging left and right-wing pro-Russia movements in Poland, but right now, this seems unrealistic.

There is much more room for maneuver for Putin in the virtual world: trails of information planted by trolls have even reached Berlin – for example the case where 13-year -old Liza was allegedly raped by refugees. These stories help to spread panic throughout society. But to tackle this problem, we need tools other than groups of insurgents and underground leaflets. The key to understanding what is going on around us is to comprehend how new media operate to spread panic, rather than looking at clues that connect us to August 1939.

The horrors reported in the past week have most likely come from a twitter storm, which blew up due to increased activity of Russian troops in Crimea – a story which was leaked to the West through Chinese whispers. This case was comprehensively described in the pages of Dziennik Opinii by Paweł Pieniążek. Greetings from the world of post-truths.

I don’t even want to know what the right-wing press are reporting during this slow news season. If I was to look, the fear of war would no doubt overcome me. The only real bloody twentieth-century war in Europe which is now possible is a Polish-Polish war.

Kaja Puto works for the magazine and publishing house Ha!art. She publishes on East-Central Europe, the South Caucasus, and migration.

This text was originally published on krytykapolityczna.pl. Translated by Louisa Naks