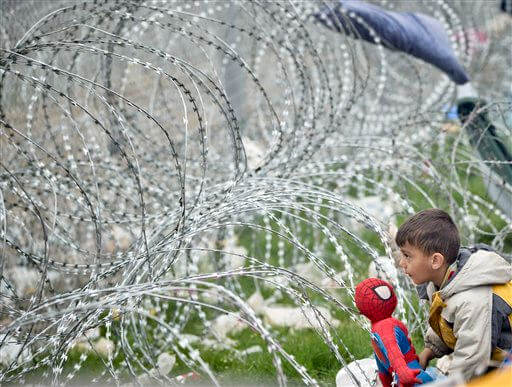 For years the most convenient route to the EU for asylum seekers from the Russian Caucasus, as well as Tajikistan, Georgia, Armenia and other former Soviet republics, was a transit through the Belarusian border town of Brest to the neighbouring Polish town of Terespol. This year, however, a greater share of asylum seekers has been repeatedly rejected entry to Poland, a country that had accepted the largest number of asylum seekers from Russia’s Chechnya in the EU. After 200 migrants protested at the Belarus-Poland border in August, one senior official stated that Poland is trying to block a “new migration route.” While hundreds of people stranded at the border find themselves in an increasingly marginalized situation, the ultimate aim of this approach remains unclear.

A bottleneck approach to asylum

An estimated 1,500 migrants, mostly from Chechnya, are now living in Brest. Every morning some 350 migrants embark on a 15-minute “Chechen express” to Terespol, a decrease from the unprecedented 600-800 people a day in August. When the train arrives to Poland and those with valid travel documents pass through passport and customs control, foreigners without such documents line up for an interview with the Polish Border Guard officials. Few families get accepted into the asylum procedure, while the overwhelming majority of foreigners return to Brest with an “entry rejected” stamp in their passports. The next day the cycle repeats itself.

While nothing new, reluctance to accept applications for international protection by the Polish Border Guard has become more frequent, raising concerns amongst civil society organizations such as Helsinki Foundation for Human Rights (HFHR) and the Belarusian human rights initiative “Human Constanta” that launched a legal and humanitarian mission in Brest. Volunteers collect warm clothes for migrants who had not expected to spend the cold season in Belarus.

To put this in perspective, in the first six months of 2016, Polish Border Guard issued 42,300 rejections of entry (more than half to Russian citizens), with the lack of valid entry documents cited as the main reason. This number stood at 17,712 in the same period of 2015. According to numerous migrants’ accounts, one person may undertake up to 45 attempts to have his or her application accepted.

According to a recent report by the leading Polish NGO the “Association for Legal Intervention,” the interviews with foreigners last only a couple of minutes in conditions that do not allow for privacy, making it virtually impossible to share personal or painful information. The study adds that both those asylum seekers who articulated fear of persecution and those who mentioned economic reasons for coming to Poland face the same reaction from the Border Guard. “’They don’t want to hear us out’ seems to be the key here.”

Although Chechnya and Tajikistan are not torn by active conflicts, the on-going influx of asylum seekers from these places should not come as a surprise.

There have been reports of intensifying persecution of the political opposition in Tajikistan, especially of members of the now outlawed Islamic Revival Party, as well as an ever-deteriorating human rights situation in Chechnya. According to Human Rights Watch, the Chechen authorities intensified the crackdown on anyone who shows disloyalty towards or is critical of the regime in the months preceding the September elections. Abductions, enforced disappearances, and collective punishment seem to be a daily reality for many. “There, in Chechnya, there is no way to live. You have a friend one day and the next day he can get abducted,” said one man in Brest to a reporter.

Mr. Minister, where do we go from here?

While the struggle of migrants in Belarus usually goes unnoticed by the media, on 29-30th August the “Brest refugees”, as some call them, moved into the spotlight when about 200 people staged a two-day protest at a border checkpoint on the outskirts of the city. They hoped to attract attention to their problems and demanded to talk to the Polish officials. Apart from the media and a Russian consulate official, who was of no interest to the protesters, no one met with them. After two days in a camp, they returned to Brest.

This unprecedented collective action was met with firm comments by the Polish Minister of Internal Affairs. In an interview with the TVN24 channel, Minister Błaszczak placed the decade-long problem of Chechens at the Belarus-Polish border in the context of the recent migration crisis and security concerns.

“We will not succumb to the pressure of those who want to start a migration crisis. Our politics is totally different. The Polish border is sealed. Unlike in previous years, there is no war in Chechnya,” said the Minister. “In my opinion, this is an attempt to create a new migration route, [and] an inflow of Muslims into Europe.”

This rhetoric fits well with the stance of Poland’s ruling conservative Law and Justice party (PiS), elected last October. The party campaigned heavily with an anti-migration sentiment and has been opposing the resettlement of 7,000 refugees assigned by the EU.

“As long as I am Interior Minister, as long as PiS is in power, we will not expose Poland to the threat of terrorism,” the Minister added.

As HFHR points out, however, the tens of thousands of refugees accepted by Poland since the 1990s have not posed any serious threat to national security. Moreover, the right to seek asylum for fear of persecution is fundamentally universal.

Poland is obliged to guarantee it under national and EU legislation, as well as international covenants, including the 1951 Geneva Convention on the Status of Refugee. The assessment of whether a person qualifies as a refugee should be carried out individually in a due process. In Poland’s case, the Office for Foreigners carries this responsibility, not the Border Guard. Even if we imagine for a second that all asylum seekers lack grounds to be granted protection, it would not justify the denial of their right to ask for protection in any way. No one can assess the validity of an asylum claim if there is no chance to make one.

While there has been no lack of criticism towards the situation at the border or the comments of the Minister, with activists and journalists raising concerns about the situation in Tajikistan and Chechnya, it is absolutely unclear what goals this approach may be pursuing.

If this statement was intended to make Poland look less welcoming towards migrants, it has succeeded.

It is clear, however, that as a rational decision-maker, the Minister does not suggest sealing the Polish border entirely. Otherwise Poland might face an increase in irregular migration and, as a result, less control over those who enter the territory of the country, something that Mr Błaszczak, as Interior Minister, would not like to happen. Perhaps this is why, despite denying the right of these people to apply for asylum, Polish officials still let them in at a ‘slower pace.’

Ample historical evidence proves that closed borders and tightening of immigration controls do not stop migration. If anything, these policies often divert migrant routes (as happened numerous times along the “Balkan route”) and make them more dangerous and sometimes deadlier. They also open up space for smugglers to offer their services in response to the demand that is generated by the border controls themselves. In short, one can close the borders but the people will keep hoping and will keep coming.

If the statement was to discourage further arrivals, then it may not succeed either.

In the words of one of the migrants from Grozny, “It is not a good life there that we are fleeing from.”

Besides, many people in Brest told reporters they had sold their houses and essentially have nowhere to return to. Unsuccessful asylum seekers also fear persecution in Russia upon return, and not without grounds, as documented by the leading Russian human rights NGO. Equally, they have legitimate concerns about staying in Belarus , which has an open border with Russia and presents few opportunities for them to support their families.

“[I] sent people there [to sort out the situation] but no one of those who are trying to cross the border [to Poland] could explain clearly who they were, where they came from, [and] why the went there,” said Chechnya’s president and strongman Ramzan Kadyrov, essentially confirming the asylum seekers’ concerns.

As long as people face danger and persecution in their respective countries, there is no doubt that asylum seekers from the former soviet states will keep showing up at the borders of Eastern Europe. Instead of turning them away and pretending that the problem does not exist, it is probably better to stick to the existing legal frameworks and draw from the unique 20 years of experience of acceptance and integration of refugees from the North Caucasus and former Soviet Union.

Poland has a better story to tell than this.